Q1. Why has the water shortage problem aggravated in post-independence India?

Intensive industrialisation and urbanisation witnessed in post-independence India have significantly contributed to the exploitation of available freshwater resources. Industries require a huge supply of water for production, cooling of machineries and power supply in form of hydroelectricity. Ever increasing urban centres with large and dense populations and urban lifestyles have increased the domestic water requirement and power requirement. Individual groundwater pumping devices in housing complexes of big cities have aggravated the problem of depletion of water resources. Agricultural progress in the post-independence era has also led to water scarcity. Irrigation in different forms to increase agricultural production exploits the available surface and groundwater sources excessively. As a result of the above mentioned reasons, the water shortage problem has aggravated in post-independence India. 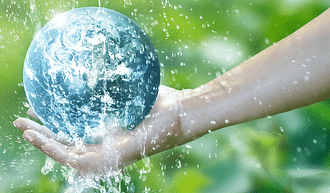 Two points that should be kept in mind for efficient management of water are:

Q3. Mention a negative effect of irrigation? How can irrigation transform the social landscape?

Irrigation has changed the cropping pattern of many regions with farmers shifting to the cultivation of water-intensive and commercial crops. This has great ecological consequences. It leads to waterlogging and consequent salinisation of the soil. This is a negative effect of irrigation. As rich farmers have better access to irrigation they have earned more money due to the production of commercial crops. On the other hand, the landless poor who couldn’t avail of its benefit became poorer. Thus, irrigation has transformed the social landscape by increasing the social gap between rich landowners and the landless poor farmers.

Rainwater harvesting is an efficient method of water conservation and management. The technique of collecting and storing rainwater directly or recharging it into the ground through artificial means to improve groundwater storage is called rainwater harvesting. It includes traditional methods like:

Rainwater harvesting is very simple, practical and cost-effective and can be easily conducted by individuals to solve their water problems.

The objectives of rainwater harvesting are: