Q.1. Give a brief description of tropical evergreen forests.

Ans. Tropical evergreen forests are found in areas receiving heavy rainfall of over 200 cm, well distributed throughout the year. They are also known as rainforests. The warm, wet climate throughout the year supports luxuriant vegetation of all kinds including trees, shrubs and creepers. The trees grow very tall, reaching a height of 60 metres. As the trees grow very close to each other they form a thick canopy. The different types of vegetation form a multi-layered structure. The climate supports large number of broad-leafed trees of differentspecies. Ebony, mahogany, rosewood, rubber, cinchona are commercially important trees. These trees donot shed their leaves at the same time as there is no distinct dry season. This makes the forests evergreen as they retain their green look throughout the year.

Q.2. What are the characteristics of the trees of deciduous forests? (CBSE 2010)

Ans. Deciduous forests are found in areas receiving rainfall of 70 to 200 cm with a distinct dry season. They are also known as Monsoon Forests. Trees of this forest type shed their leaves for about six to eight weeks in dry summer. So they have a distinct period for shedding their leaves. The trees have widespread out branches like the neem and mango. Leaves are smaller in size than that of the rain forests to reduce transpiration. The trees also have less height than evergreen trees. The trees are prized for their hardwood commercially valuable timber is collected from these forests. These forests are more open and less luxuriant and trees are more spread out. On the basis of availability of water, deciduous forests are divided into moist deciduous, e.g. teak, sal, shisham, sandalwood, and dry deciduous, e.g. sal, peepal, neem, palas.

Ans. The term flora is used to denote plants and the term fauna is used to denote animal species of a particular region or period. India is rich in flora and fauna and is marked by great biodiversity. With about 47,000 plant species, India occupies tenth place in the world and fourth in Asia in plant diversity. 15,000 flowering plants are endemic or indigenous to India. They account for 6 per cent of world’s total number of flowering plants. A large number of nonflowering plants like ferns, algae and fungi are also found in India. Plants of all climatic regions ranging from tropical to Tundra are found in India. India is rich in fauna or animal life also. It has more than 89,000 species of animals and 1200 species of birds. 13 percent of the world’s total number of birds are found in India. 5 to 8 percent of the world’s amphibians are found in India. It has 2500 species of fishes in its marine and freshwaters. This accounts for nearly 12 percent of the world’s stock. India is the only country in the world which has both lions and tigers.

Ans. Extinct species are those species of flora and fauna which are no more surviving. Even after searches of known or likely areas where they may occur, they are no more found. A species may be extinct from an area, region, country, continent or the entire earth. Asiatic cheetah and pink-head duck are extinct in India. Dodo and dinosaurs are extinct from the entire earth. Endangered species are those species of flora or fauna which are in the danger of extinction. They have declined in number at an alarming rate. If the negative factors that have reduced their number is not checked, their survival is difficult. Black buck, Indian rhino, Indian wild ass, Sangai and Indian tiger are endangered species in India. Black Panda is an endangered species throughout the world.

Q.5. Give a brief description of temperate forests.

Q.6. Discuss the type of vegetation found in a thorn forest. OR Describe any three features of thorn forests.

Ans. Thorn forests are found in regions with less than 70 cm of rainfall. This type of vegetation is found in northwestern India, in the desert and semi-arid areas. The vegetation consists of low and open forests with short thorny tress and thorny bushes, scrubs and grasses in between. Trees are scattered and have long roots, penetrating deep into the soil to tap groundwater. The leaves are thick and small to reduce evaporation and are often transformed into spines and thorns to minimise evaporation. The cacti growing in the deserts have thick succulent stems to conserve water. Acacias, palms, euphorbias, khair, babul and cacti are the main plant species of the thorn forests.

Q.8. Distinguish between a tropical evergreen forest and a dry deciduous forest.

Ans. The points of distinction between a tropical evergreen forest and a dry deciduous forest are as follows : 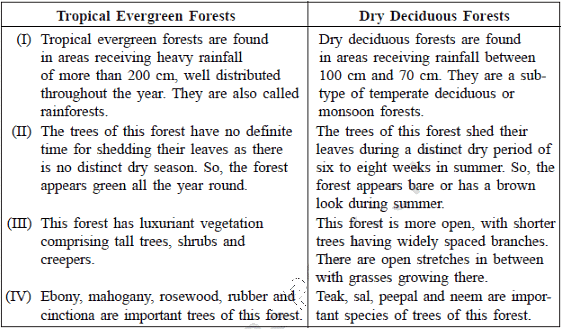 Q.9. Describe the main objectives of the Project Tiger and the Project Rhino and their effect on the wildlife in India. (Important)

Ans. The Project Tiger and Project Rhino are two well known wildlife conservation projects. They have been undertaken to protect the Indian tiger and the one-horned rhino of  India which are endangered species.Their objectives are as follows :

(i) Protect the endangered species from poaching, hunting and illegal trading.

(ii) Save the natural habitats of these animals so that they can breed naturally and multiply in numbers.

(iii) Maintain a survey of the number of existing tigers and rhinos. These well publicised projects have played a great role in protecting the endangered animals. Under the projects government has undertaken steps to save and protect the existing animals by banning hunting and poaching.

Ans. All the plants and animals occur in distinct groups of communities in areas having similar climatic conditions. All the plants and animals in an area are interdependent and interrelated to each other in their physical environment called the ecosystem. Human beings are an integral rapt of the ecosystem. They utilise the vegetation and wildlife. The greed of human beings leads to over utilisation of these resources. They cut the trees and kill animals creating an ecological imbalance.

Q.11. Describe the kind of vegetation and wildlife found in the Ganga-Brahmaputra delta.

Ans. To protect the flora and fauna of the country, the government of India has taken many steps, as stated below :

(iii) 89 National parks, 49 wildlife sanctuaries and zoological gardens are set up to take care of our natural heritage.

Q.13. In which region are the thorny forests and scrubs found in India? Mention any two characteristics of such type of vegetation? [2011 (T-2)]

Ans. The thorny forests and scrubs in India are found in regions with less than 70 cm of rainfall. This type of vegetation is found in the North-Western part of the country including semi-arid areas of Gujarat, Rajasthan, Madhya Pradesh, Chhattisgarh, Uttar Pradesh and Haryana. Acacias, palms euphorbias and cacti are the main plant species.

The two important characteristics of such type of vegetation are as follows :

(i) Trees are scattered and have long roots penetrating deep into the soil in order to get moisture.

(ii) The stems of the trees are succulent to conserve water. Leaves are mostly thick and small to minimize evaporation.

Ans. India is one of the twelve mega biodiversity countries of the world. With about 47,000 plant species India occupies tenth place in the world and fourth in Asia in plant diversity. There are about 15000 flowering plants in India which account for 6 percent of the world's total number of flowering plants. The country has many non-flowering plants such as ferns, algae and fungi. Besides, India has 89,000 species of animals as wells a rich variety of fish in its fresh and marine water.

Ans. The two sub-types of Tropical deciduous forests are (i) Moist Deciduous and (ii) Dry Deciduous type. These divisions are made on the basis of the availability of water.

(i) Moist deciduous forests are found in regions receiving rainfall between 200 and 100 cm. The main characteristics of vegetation are

(a) thick cover of forest, characterized by climbers and epiphytes. Bamboo and ferns are common.

(b) All the trees are evergreen. They do not shed their leaves at a time. Therefore, the forest will remain green all the year round.

(a) These forest shed their leaves during early spring or summer when sufficient moisture is not available. The forest appears bare and brown during summer.

(b) The forest is more open in which grow important trees like teak, sal peepal, neem.

Q.16. Name the vegetation found at high altitude in our country and mention animals are found in this region. [2011 (T-2)]

Ans. Forests provide to man food, fibre, fodder, timber, fuel wood and hosts of other essential items. It provides raw materials to industry and transport. Forest is a renewable resource and is widely used as domestic fuel in Third World countries. Forest also influences the environment by modifying local climate, controlling soil erosion and deposits humus in the soil, regulating stream flows. Minor forest products provide livelihood to many forest dwellers. Besides, forest is the home of various wild animals and birds. It offers recreation to man and boosts the Tourism industry.

Ans. Natural vegetation refers to a plant community which has grown naturally without human aid and has been left undisturbed by humans for a long time. This is also known as a virgin vegetation. Cultivated crops and fruits, orchards form also part of vegetation but not natural vegetation. The importance of natural vegetation lies on to modify local climate, control soil erosion, regulate stream flow, support a variety of industries, provide livelihood for many communities and offer panoramic view for recreation. It controls windforce, regulate temperature and causes rainfall. It also provides humus on the soil and shelter to the wild life. India's natural vegetation has undergone drastic changes. Still, it holds key position in areas of inaceessable hilly regions and Marusthali.