The document Short Answer Questions - Chemical Effects of Electric Current Notes | EduRev is a part of the Class 8 Course Science Class 8.
All you need of Class 8 at this link: Class 8

Ans: Join the free ends of the tester together, for a moment, and check whether the bulb glows or not, if the bulb glows it means tester is working and if not it means tester is not working. In case it does not glow check that all connections are tight, or not.Q4: How can you test whether lemon juice is good conductor or poor conductor of electricity?

Ans: Pour one table spoon of lemon juice in a plastic cap of discarded bottle, dip the end of tester into lemon juice, make sure that the tester should not more than 1 cm apart at also should not touch each other, we will observe the current flows in the circuit and bulb glows, this proves that lemon juice is good conductor.Q5: In some situation even liquid is allowing the electric current to pass but, bulb does not glow. Why so?

Ans: This happens when current through the circuit is too weak to make the bulb glowQ6: Why the filament of bulb does not get heated sometimes in a circuit?

Ans: Distilled water is a poor conductor but if we add some salt in it the resulting salt solution is good conductor.Q10: Explain the functioning of a LED.

Ans: LED stands for Light emitting diode. It is a semiconductor light source, use to detect weak current in the circuit. There are two wires attached to a LED, one lead is slightly longer than the another one, the longer lead is always connected to the positive terminal of battery and shorter lead is connected to negative terminal of batteryQ11: What are the purpose of one longer and another shorter lead of a LED?

Ans: Tap water is not pure, it contains several amounts of mineral salts naturally dissolved in it , thus it is good conductor.Q13: Why water that we get from ponds and hand pumps are always good conductors?

Ans: Water that we get from ponds and hand pumps is not pure, it contains several amounts of mineral salts naturally dissolved in it , thus it is good conductor.Q14: We add small amount of dilute hydrochloric acid to distilled water, the resulting solution will be a good conductor or poor conductor? Explain why.

Ans: Good conductor, because when we add kitchen salt (NaCl) to the distilled water the salt dissolves in water by splitting its molecules in ions:

Ans: Poor conductor, because Sugar, as a non-electrolyte substance, does not produce ions when dissolved in water. A solution of sugar contains molecules of sucrose,but no ions. The absence of ions in a sugar aqueous solution makes it a non-electricity conductor fluid.Q16: What happens when electrodes are immersed in water and a current is passed?

Ans: When electrodes are immersed in water and a current is passed bubbles of oxygen and hydrogen is produced.Q17: Explain the process of electroplating.

Ans: One of the most common applications of the chemical effect of electric current is electroplating. In this process, there exists a liquid, usually called the electrolyte, through which current passes. Two electrodes, connected to the terminals of a battery with a switch in between, are inserted in the liquid. The electrode that is connected to the positive terminal of the battery is called the “anode,” and the other connected to the negative terminal is called the “cathode”. Electroplating is done in industries to have an anti-reactive coating on the parts of machines so that they do not react with the raw material, to have an anti-corrosive coating for the machines so that they do not get corroded, and a heat-resistive coating for parts like boilers to resist the heat produced by the machinery.The process of electroplating is used for plating parts of vehicles with nickel and chromium, which protects them from corrosion.Q18: What do you mean by gold plating?

Ans: Gold plating is one of the most common applications of electroplating in ornament-making.Q19: Define electro- magnetic induction.

Ans: In a circuit the induced current flowing through the coil is always such that it opposes the motion of the magnet. This process of producing induced current due to a varying magnetic field is called electro- magnetic induction.Q20: What do you mean by electrolysis and electrolytes?

Ans: Electrolysis: The passage of an electric current through a liquid causes chemical changes. This process is known as electrolysis.

Electrolytes: Conduction is possible only in those liquids which are at least partly dissociated into oppositely charged ions; such liquids are called electrolytes.Solutions of many inorganic chemical compounds (e.g. common salt, sulphuric acid, etc.) are examples of this type of liquid.Q21: What do you mean by voltameter?

Ans: Voltameter: In electrolysis, the whole arrangement of electrodes, electrolyte and the vessel containing them is called a voltameter. In the case of the copper voltameter, which involves copper electrodes in copper sulphate solution, the net effect is that copper is dissolved off the anode and deposited on the cathode, with the electrolyte remaining unchanged.Q22: When the free ends of a tester are dipped into a solution, the magnetic needle shows deflection. Can you explain why?

Ans: The deflection through the compass needle shows that current is flowing through the wounded wire and hence through the circuit. The circuit is complete since free ends of the tester are dipped in the solution and the solution is certainly conducting solution.Q23: In case of fire before the fireman used the water hoses, they shut off the main electrical supply of the area, why so?

Ans: Water may conduct electricity, if the electrical supply of the area is not shut off and water is poured over electrical appliances then electricity may pass through fire and may harm the fireman, thus In case of fire before the fireman used the water hoses, they shut off the main electrical supply of the areaQ24: In which case the compass needle will deflect more: by testing sea water or by testing drinking water?

Ans: This is because rain water contains dissolved salts that makes it a conducting solution.Q26: Differentiate between conductors and insulators.

1. Bubbles of a gas may be formed on the electrodes.

2. Deposits of metal may be seen on electrodes.

3. Changes of colour of solutions may occur.

4. Infact, the reaction would depend on what solution and electrodes are used.Q28: Is it safe for an electrician to carry out electrical repairs outdoors during heavy downpour? Explain.

Ans: Take a filter paper and soak it with potassium iodide and starch solution.

We will see that wherever we write, blue coloured ink will appear. The reason for this is electrolysis of potassium iodide solution which produces iodine. Iodine on reaction with starch produces ink of blue colour.

Q30: What do you mean by electric current?Ans. The continuous and directional flow of charges (electrons) is called electric current. It is denoted by I and its unit is ampere.Q31: What is a tester?Ans. The instrument which is used to check the flow of electric current is called tester. It is attached to the terminals of the electric circuit. If the bulb of tester glows, it confirms that current is flowing through the circuit. 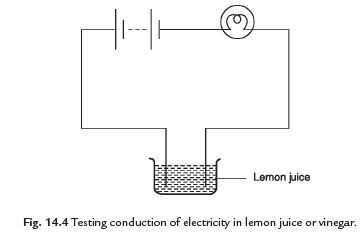 Q34: Explain the mechanism of glowing of bulb in liquid.Ans. When the liquid between the two ends of a tester allows the electric current to pass, the circuit of the tester becomes complete. The current flows in the liquid circuit and the bulb glows. When the liquid does not allow the electric current to pass, the circuit of the tester is not complete and the bulb does not glow.Q35: There are some situations in which even though liquid is conducting, bulb may not glow. Give reasons.Ans. The possible reasons may be:(i) The current may be weak.(ii) Bulb may be fused.(iii) Incomplete circuit.Q36:  Explain why a bulb glows on passing current.Ans. When the current passes through a bulb, the filament of the bulb gets heated to a high temperature due to the heating effect of current. The bulb starts to glow. Sometimes the current is too weak and filament does not get heated sufficiently and bulb does not glow.

Q37: What is LED? Why is it most important source of light?Ans. The device which is used in the tester in place of bulb is called LED. It glows even at very small current. There are two wires called leads attached to the LED. One lead is longer than the other. A long wire is connected with the positive terminal and shorter lead is connected to the negative terminal of battery. 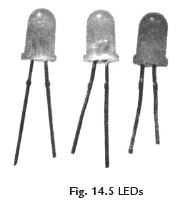 Q39: The ordinary water can conduct electricity while distilled water does not. Explain why.Ans. The water that we get from various sources like taps, hand pumps, wells and ponds is not pure. It may contain several salts dissolved in it. This water is thus good conductor of electricity. Distilled water is free of salts due to which it is a poor conductor.