The document Short Answer Type Questions: Rain on the Roof Notes | Study English Class 9 - Class 9 is a part of the Class 9 Course English Class 9.
All you need of Class 9 at this link: Class 9 Q1. What do the humid shadows refer to?

The humid shadows refer to the dark clouds.

Q2. What is melancholy in the poem ‘Rain on the Roof’

In this poem ‘darkness’ is melancholy.

Q3. What does the poet like to do when it rains?

When it rains the poet like to keep lying in his cosy bed and enjoy listening to the patter of soft raindrops.

Q4. What sound do the raindrops make?

The raindrops make the sound of patter.

Q5. What makes an echo in the poet’s heart?

The sound of raindrops on the roof makes an echo in the poet’s heart.

Q6. What do the recollections do?

The recollections weave their air-threads into woof.

Q7. Where do the raindrop patter?

The raindrops patter on the shingles of the roof.

Q8. What is the single major memory that comes to the poet?

It is the memory of his mother.

Q9. Is the poet, Coates Kinney, a child now?

Q10. Who are the -darling dreamers” Coates Kinney refers to in the poem ‘Rain on the Roof’?

They are all the children of the mother.

No, his mother is not alive.

Q13. What do the following phrases mean?

‘Humid shadows’ here refers to the clouds which are water-laden and shadow or cover the starry sky.

‘What a bliss’ is an exclamatory expression showing great pleasure.

The clause implies that a large number of memories are revived in an otherwise much-occupied mind.

(e) A thousand recollections weave their air-threads into woof

This clause is a metaphorical expression. Recollections are presented as weavers and the particular memories are the threads woven into the fabric of the mind.

Q14. Describe the weather just before the rain starts.

As described by the poet, the weather before the rain is humid. It is dark, and the starry night sky is covered by thick clouds just before it begins to rain.

Q15. What does the poet want to do when it rains?

When it rains, the poet wants to lie snugly in his cosy cottage with a soft pillow under his head. He wants to enjoy the rhythmic, soft music of the raindrops falling on the roof.

Q16. According to the poet, what is nature’s mood in ‘rainy darkness’?

Whereas the darkness is in a sad and gloomy mood, the poet is in a happy mood as he considers it bliss to lie comfortably in bed pressing the head against the pillow and listening to the music made by the showers of the rain.

Q18. Is the rain referred to in the poem as a heavy downpour?

No, the rain referred to in the poem is not a heavy downpour. Instead, it is soft and gentle as is obvious from the pattering sound made by it while falling on the roof.

Q19. What is the impact of the tinkle of the raindrops on the poet’s heart?

Q20. Which is the single major memory that comes to the poet?ORWhich distinctive memory is revived in the poet’s mind?

Q21. Who are the “darling dreamers” referred to by the poet?

Q22. Why does the poet call the sound of the rain a “refrain”?

Q23. Is the poet now a child? Is his mother still alive?

Q24. What does the poet like to do when it rains?

Q25. Is the poet now a child? Is his mother still alive?

Q26. Write the central theme of the poem ‘Rain on the Roof.

Q27. What type of dreamy fancies comes to the poet’s mind?

Q28. What did the poet dream of while listening to the rain?

While listening to the pattering of the rain, the poet dreamed of several fancies. The poet was lost in old recollection.

Q30. How is the movement before rain described in the poem?

Before the rain, the dark wet shadows of clouds come over the sky. The stars seem to be turned into big spheres and covered under these clouds. Suddenly it starts raining.

Q31. What does the patter of rain on the roof remind the poet?

The poet is deeply attached to the patter of the rain when the roof. He seems to remember his mother. He feels the presence of his mother’s love in the sound.

The document Short Answer Type Questions: Rain on the Roof Notes | Study English Class 9 - Class 9 is a part of the Class 9 Course English Class 9.
All you need of Class 9 at this link: Class 9 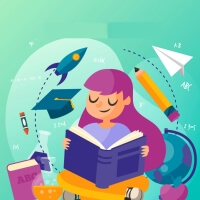