The document Short Answers - Diversity in Living Organisms, Science, Class 9 Class 9 Notes | EduRev is a part of the Class 9 Course Class 9 Science by VP Classes.
All you need of Class 9 at this link: Class 9

Q1. Give the characteristics of Monera.
Ans. (a) Organisms are unicellular, do not have a defined nucleus.
(b) Organisms may have cell wall or may not have cell wall.
(c) Mode of nutrition is either autotrophic or heterotrophic.

Q2. Give the characteristics of Protista.
Ans. (a) Organsims are unicellular and eukaryotic.
(b) Use appendages for locomotion like cilia, flagella, etc.
(c) Nutrition is either autotrophic or heterotrophic.
(d) E.g., algae, protozoa.

Q3. What are hermaphrodites? Give two examples.
Ans. When an organism has both the sexes, i.e., it can produce both sperms and eggs are called hermaphrodites. Example: Sponges, earthworms.

Q4. Give the difference between thallophyta and bryophyta.
Ans.

Q5. Give the difference between monocots and dicots.
Ans.

Q6. Give the difference between two types of symmetry that animals show.
Ans. Symmetry—Bilateral and Radial

Q9. Identify the phylum for the following characteristics given below:
(a) Organisms with joint appendages.
(b) Organisms are generally flat worms.
(c) Body is segmented.
(d) Skin of organisms is full of spikes.
Ans. (a) Arthropoda
(b) Platyhelminthes
(c) Annelida
(d) Echinodermata

Q10. State the features of all chordates.
Ans. All chrodates possess the following features:
(i) Have a notochord
(ii) Have a dorsal nerve chord
(iii) Are triploblastic
(iv) Have paired gill pouches

Q11. Give general characteristics of Porifera.
Ans. (a) Animals with pores all over the body.
(b) Body is not well differentiated.
(c) Non-motile animals, remain attached to solid support.
(d) Body is covered with hard outer skeleton. Example, sponges.

Q13. Give general characteristics of ‘Platyhelminthes’?
Ans. (a) These are flat worms.
(b) Most of them are parasites.
(c) Animals are triploblastic
(d) No true internal body cavity.
E.g., Tapeworm, Planaria, Liver fluke.

Q14. Give specific characteristics of Coelenterata.
Ans. (a) Water living animals.
(b) Body is made of two layers of cells.
(c) Some of them live in colonies (corals), while others have solitary life-span (Hydra).
(d) Body cavity present.

Q15. Give the characteristics of Arthropoda with 2 examples.
Ans. (a) Arthropoda means ‘jointed legs’.
(b) Animals are bilaterally symmetrical and segmented.
(c) It has an open circulatory system.
(d) This is the largest group of animals.
Example: Spider, scorpions, crabs, houseflies.

Q16. Give the characteristic features of Echinodermata.
Ans. (a) Spikes present on skin.
(b) Free living, marine animals.
(c) Triploblastic and have a coelomic cavity.
(d) Have a peculiar water-driven tube system used for moving around.
(e) Have hard calcium carbonate structure that is used as a skeleton.
Example, Starfish, sea urchin.

Q17. Give the characteristics of mammals.
Ans. (a) Mammals are warm-blooded animals.
(b) Four-chambered heart.
(c) Mammary glands for production of milk to nourish their young ones.
(d) Skin has hairs, sweat glands and oil glands.
(e) Most of them produce their young ones (viviparous).

Q21. Give the characteristics of amphibians.
Ans. Amphibians are vertebrates that lives on land and in water.
(a) They are cold-blooded.
(b) Heart is three-chambered.
(c) Fertilization is external.
(d) Respiration through lungs on land and through moist skin when in water.
Example, Frog, Toads

Q24. Give the hierarchy of 5 kingdom classification of living world.
Ans. 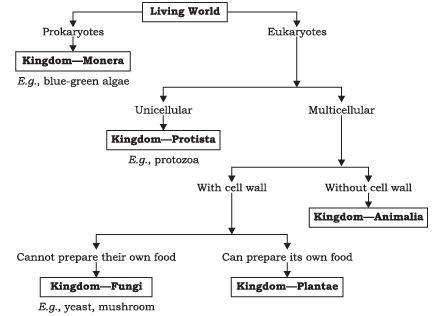 Q25. Give one example of each
(a) Asymmetry,bilateral and radial symmetry.
(b) Acoelomate,pseudocoelomate and haemocoelomate.
Ans. (a) In asymmetrical the body cannot be divided into two equal halves and in radial symmetry the body can be divided into two halves.
(b) Acoelomate: Body has no coelom eg. Sponges and flat worms,
Pseudocoelomate: The animals in this group have false cavity eg. nematodes.
Haemocoelomate: The body cavity is filled with blood eg. arthropods

Q29. A group in classification includes many kind of unicellular eukaryotic organisms. Some of them use appendages, such as hair like cilia, flagella for moving around. Answer the following questions based on the information given above:
(a) Identify the kingdom to which these organism belongs.
(b) What is the mode of nutrition for these organisms?
(c) Write two examples of organisms belonging to this group.
Ans. (a) The kingdom is Protista.
(b) They may show autotrophic or heterotrophic mode of nutrition.
(c) Amoeba, paramecium.

Q30. Identify the class of animals having the following characteristic features.
(a) The warm blooded animals that lay eggs and have four chambered heart and a covering of feathers.
(b) Give an example of an animal belonging to each of these classes.
Ans. (a) Class: Aves.
(b) Examples are ostrich, hen, eagle.

Q32. State different parts of a seed and give function of each?
Ans. Embryo: Grows into new plant.
Cotyledons: Grow into stem. It is also a food source.
Radical: Grows into roots.
Endosperm: Food storage.