The document Short Answers - Is Matter Around Us Pure, Science, Class 9 Class 9 Notes | EduRev is a part of the Class 9 Course Class 9 Science by VP Classes.
All you need of Class 9 at this link: Class 9

Q1. Why is mixture called impure substance?
Ans. Mixture consists of different components which retain their properties and can be easily separated by physical processes, hence it is called as impure substance.

Q2. Give the differences between mixture and compound.
Ans.

Q3. Distinguish between a physical change and chemical change.
Ans.

Q6. What is a colloidal solution?
Ans. It is a heterogeneous solution which appears to be homogeneous, particles size is very small and so cannot be seen with naked eyes but it is stable. E.g., milk and blood.

Q8. Give the applications of centrifugation.
Ans. Application of centrifugation are:
1. Used in diagnostic laboratories for blood and urine test.
2. Used in dairies and home to separate butter from cream.
3. Used in washing machines as a spinner to squeeze out water from wet clothes.

Q10. Why is crystallisation better than evaporation?
Ans. Crystallisation is a process that separates a pure solid in the form of its crystals from a solution.

Q12. A student is given a mixture of naphthalene ball’s powder and common salt. He need to separate this mixture. How will he do this?
Ans. The properties of both naphthalene and common salt should be known, before we choose the separation technique. 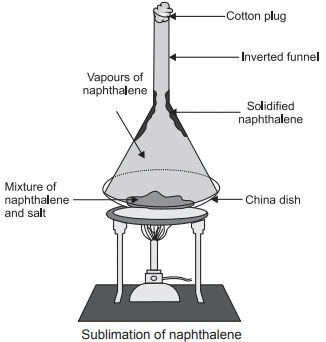 Naphthalene is a sublimate which on heating changes to gaseous state directly. Hence to separate a volatile compound (sublimate) from a nonvolatile compound (non-sublimate), the sublimation process is used. In a China dish the mixture is kept, and is placed on a stand. An inverted funnel is kept over the mixture in China dish with plugged stem. The sublimate on heating gets collected on the funnel and common salt remains in the China dish.

Q13. How can we obtain different gases from air?
Ans. Air is a homogeneous mixture and its components can be separated by fractional distillation.

The flow diagram shows the steps involved in the process.

Q14. Draw a flow diagram to show how the water purification system in water works.
Ans.

In filtration tank water passes through different layers of sand and gravel as shown in the above figure. This is for adsorption of impurities.
The clear water reaches a chlorinated tank where water is mixed with bleaching powder/chlorine to kill bacteria and then supplied to houses.

Q15. Why is air considered as a mixture and not compound?
Ans. Air is considered as a mixture because it exhibits following properties:
1. Each component present in air retains its properties.
2. Each component can be separated by simple physical processes.
3. The components do not have any fixed proportion. All gases are present in different amount. Example, in greener area—more oxygen and water vapour is present; near industrial area—air consists of lot of impurities and smoke suspended in it.

Q16. How can you prove that water is a compound?
Ans. When electricity is passed through water at two different electrodes, we get two different gases i.e., oxygen and hydrogen during electrolysis of water are produced. The ratio of oxygen: hydrogen is 1:2 by number of molecules.

Q19. If 20 g of salt is present is 220 g of solution, calculate the concentration of solution.
Ans.

Q20. A list of techniques used to separate mixtures is given below.

Q21. In Chromatography: Sometimes a spot will remain on the base line, where sample was first applied:
(a) Suggest what affinity this substance would have for solvent.
(b) Suggest the value for Rf of this substance.
(c) Outline how you could determine whether these materials are pure or a mixture?
Ans. (a) The spot on the base line is not soluble in the solvent.
(b) Its Rf value is 0.
(c) The solvent can be changed, only such solvent should be used in which the given sample can travel. The pure substances always have rf value less than 1.

Q26. It is important that some substances are pure. Give two examples.
Ans. Pure substances are required for several things in life like medicine and food should be pure if impurities are added into it can become fatal.