The document Short Answers - Motion, Science, Class 9 Class 9 Notes | EduRev is a part of the Class 9 Course Class 9 Science by VP Classes.
All you need of Class 9 at this link: Class 9

Q1. Give the difference between distance and displacement.
Ans.

Q2. Give the difference between speed and velocity.
Ans.

Q3. Give the difference between acceleration and deceleration.
Ans.

Q5. With the help of graph, show the uniform acceleration and uniform retardation of  a body.
Ans.

Q6. What conclusion do you draw about acceleration of the particle in motion from given velocity-time graph?

Q7. A car accelerates uniformly from 20 km/h to 35 km/h in 5 s. Calculate
(i) the acceleration and
(ii) the distance covered by the car in that time.
Ans.

(ii) The distance covered by the car

Q12. What conclusion do you draw about acceleration of the particle in motion from given velocity-time graphs. 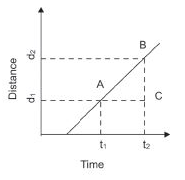 Q17. How can you get the distance travelled by on object from its speed-time graph?
Ans. Suppose an object is moving with a same speed v, the distance covered by this object when it was at (point A) ∴ To find the distance travelled by a body from its speedtime graph, we need to find the area enclosed by the graph.

Q20. The below data shows the speedometer readings of a car. Calculate the acceleration of the car.

Q21. Velocity-time graph for the motion of an object in a straight path is a straight line parallel to the time axis. Comment on any two analysis from such a graph.
Ans. The nature of the motion is uniform.
The object is not accelerating.

Q22. Draw the shape of the distance-time graph for uniform and non-uniform motion of object.
Ans.

Q23. A bus of starting from rest moves with uniform acceleration of 0.5 ms–2 for 2 minutes. Find
(a) the speed acquired.
(b) the distance travelled.
Ans. (a)

(b) There are two ways to find the distance covered by the car in t = 10 seconds.

Q26. (a) Differentiate between speed and velocity.
(b) When is a body said to have uniform velocity?
(c) How can we describe the position of an object? Illustrate with suitable example.
Ans. (a) Speed is distance traveled per unit time and velocity is displacement per unit time.
(b) Uniform velocity: when a body travels equal distance in equal intervals of time.
(c) The position of an object is described by the displacement shown by an object from its original position. For e.g., a boy travels in a circular track from a start point and reaches the finish point which is the same point. Hence the displacement is zero.

Q29. A car is travelling with a speed of 90km/h. The driver applied the brakes and retards the car uniformly. The car is stopped in 10sec. Find:
(a) The acceleration of car.
(b) Distance before it stops after applying breaks.
Ans.