Q4. What is top soil?
Ans. The top most layer of the soil that contains humus and living organisms in additions to the soil particles is called the top soil.

Q8. What is smog?
Ans. Presence of high levels of all the pollutants like unburnt carbon particles, smoke, oxides of nitrogen, sulphur, carbon etc. lowers the visibility in cold weather when water also condenses in air. This is known as smog.

Q9. What are the diseases caused by air pollution?
Ans. The pollutants present in air cause many breathing problems like asthma, it increases the allergy, cancer, heart diseases and respiratory problems.

Q10. How can lichen help in indicating the pollutants in air?
Ans. Lichens are very sensitive to the levels of contaminants like sulphur dioxide in the air. Lichens generally grow on the barks of the trees. The trees on the road-side do not show this lichen growth, if in any area the growth of lichens decreases or vanishes the air will be polluted.

Q12. Why is Earth a unique planet on which life exists?
Ans. Life exists only on Earth because many factors responsible for the life to sustain on it are
(1) Comfortable temperature
(2) Atmosphere
(3) Water

Q13. What is biosphere?
Ans. The life-supporting zone of the Earth where the atmosphere, the hydrosphere and the lithosphere interact and make life possible, is known as the biosphere.

Q14. How does atmosphere helps in climate control?
Ans. (a) The atmosphere keeps the average temperature of the Earth fairly steady during the day and night.
(b) It prevents the sudden increase in temperature during the day light hours.
(c) During night, it does not allow the heat to escape out into space.

Q15. How are winds caused and what decides the breeze to be gentle, strong wind or a terrible storm?
Ans. Heated air rises creating a low pressure area. This low pressure area is filled by air from cooler areas. The cycle creates flow of air causing wind.
The other factors that influence the wind flow is the rotation of the Earth and the presence of mountain ranges in the paths of the wind.

Q16. What is air pollution? How is it caused? Give its two harmful effects?
Ans. The contamination of air with unwanted gases, particles like dust etc which makes it unfit for inhalation is called air pollution.
Causes: (a) Burning of fossil fuels release SO2, CO2 and NO2 gases.
(b) Burning of fuels release unburnt carbon particles and smoke.
(c) Smoke from industries.

Harmful effects:
(a) It causes respiratory problems.
(b) It causes allergies, asthma, cancer and heart diseases.

Q17. What is water pollution? Give its causes and harmful effects?
Ans. Water when contaminated with unwanted substances, chemicals which makes it unfit for use and causes diseases is called water pollution.
Causes: (1) Sewage from towns, cities is dumped in the water.

(2) Fertilizers, pesticides, insecticides get washed away by water from farm lands.

(1) Polluted water when consumed cause many diseases which are water-borne like cholera, typhoid, etc.

(3) Many life-forms which are susceptible to temperature changes die.

Q18. Explain the physical, chemical and biological factors which lead to the formation of soil.
Ans. Physical factors Wind: When the wind blows it erodes big rocks which rub and hit with the other rocks breaking into smaller pieces which are further carried by wind to form soil.
Sun: The heat of sun causes expansion of the rocks due to heating during day time and it contracts at night. This expansion and contraction causes cracks in the rocks, which breaks slowly to form soil.
Water: When it rains the force of rain water erodes the rocks which breaks to form soil. At times this water enters the cracks present in the rocks and freezes when temperature falls which breaks the rocks to forms soil.
Chemical factor Water: Water when reacts with carbonates and phosphates present in the rocks, it form soluble compounds which make the rock hollow from inside.
Biological factor: Living organisms also help in the formation of soil. The lichen that grows on moist surface of rocks releases certain substances that causes the rock surface to powder down and form thin layer of soil. Other small plant like moss, are able to grow on this surface now.
The roots of big trees sometimes go into cracks in the rocks and when the tree grows bigger the crack in the rocks is forced bigger.

2. The hot air rises up with this water vapour.

5. The rain water re-enters the water-bodies. This process in which water evaporates, falls on the land as rain and later flows back into the sea, rivers is known as water cycle. 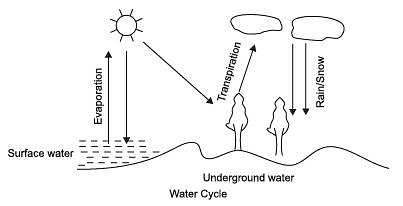 Q20. What is acid rain? Give its harmful effects.
Ans. The gases released due to combustion of fossil fuels are SO2, NO2, CO2, these gases remain suspended in the air. When it rains the rain water mixes with these gases to form sulphuric acid, nitrous acid, carbonic acid and comes down on the surface of the earth in the form of acid rain.
Harmful effects of acid-rain:
1. It corrodes statues, monuments of marble, building etc.
2. It makes the soil acidic.
3. It damages crops, plantations.

Q22. What is the difference in fog and smog? Give two harmful effects of smog.
Ans. The water-vapour present in air when condenses due to very low temperature is called fog. The smoke released in the air due to burning of fuels mixes with the fog and forms smog. (smoke + fog = smog) Harmful effects of smog:
1. It decreases the visibility and cause adverse effect on aeroplane landing, railways and road transport.

Q23. Explain the importance of ozone to mankind.
Ans. Ozone is a molecule of oxygen with three atoms of oxygen O3.
It covers the Earth’s atmosphere and is present in stratosphere. It does not allow the harmful ultra-violet radiation coming from the sun to enter our Earth.
These ultra-violet radiations cause ionizing effect, can cause cancer and genetic disorder in any life-forms.
The ozone is getting depleted at the south pole near Antartica. The ozone depletion is due to the halogens like CFC (chlorofluorocarbon) released in the air. Chlorine, fluorine reacts with the ozone and splits it, thereby leading to formation of a big hole called ozone hole. 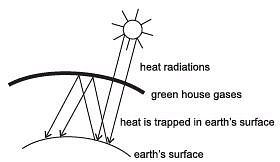 Q24. What is greenhouse effect? Why is it named so?
Ans. In cold countries where the temperature is low and vegetation does not grow, heat is trapped by glass enclosure which allows the heat radiations to enter into the glass but cannot escape out from the glass. These enclosures where plants grow are called greenhouses. Greenhouse effect: In nature, there are certain gases in the atmosphere like CO2 and methane, which allows the sun’s heat to enter the Earth’s atmosphere but prevents these radiations escape out of the atmosphere these gases are known as greenhouse gases. They help in increasing the temperature and hence this effect is called as greenhouse effect.

Q25. How does oxygen occur in nature? Explain oxygen-cycle in nature.
Ans. Oxygen exist in two different forms in nature.
Free form: 21% as oxygen gas.
Combined form: In the form of oxides of metals and non-metals in the earth’s crust, atmosphere and water. It is also present in carbohydrates, fats and proteins.
Oxygen cycle: Oxygen from the atmosphere is used up in three processes, namely combustion, respiration and in the formation of oxides of nitrogen.
Oxygen is returned to atmosphere by the process called photosynthesis.

Q26. (a) Give the existence of carbon.
(b) Explain the carbon-cycle in nature.
Ans. (a) Carbon exist in two different forms in nature-free and combined form.
Free form: It occurs in the elemental form as diamond and graphite.
Combined form: It occurs as carbon-dioxide, carbonates and hydrogen carbonate, salts in various minerals. It is also present in proteins, carbohydrates fats, nucleic acids and vitamins.

(i) Carbon-dioxide present in nature is used by plants during photosynthesis to form glucose and carbohydrate.

(iii) Plants contain carbon in the form of glucose, carbohydrate which is eaten by other animals.

(iv) Plants and animals can form petroleum if submerged under the Earth and plants form coal. But if get decomposed after dying they release   carbon back to the atmosphere by decomposition (dead) and respiration (living). 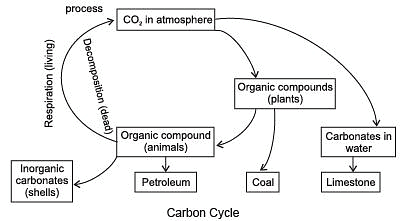 Q27. Discuss the uses of nitrogen.
Ans. Nitrogen is crucially important component for all life. It is an important part of many cells and processes such as amino acids, proteins and even our DNA. It is also needed to make chlorophyll in plants, which is used in photosynthesis to make their food.

Q28. What is meant by water cycle? How are nutrients from the land made available to marine organisms by this cycle?
Ans. Water cycle is a continuous process by which water is circulated throughout the earth by the atmosphere through evaporation, condensation, precipitation, and the transpiration of plants and animals. The rain water washes the top soil with minerals and nutrients in it and the nutrients are carried away and discharged to the water bodies and this is how these are made available to aquatic bodies.