As seen in the last lecture as channel length is reduced, departures from long channel behaviour may occur. These departures, which are called Short Channel Effects, arise as results of a two-dimensional potential distribution and high electric fields in the channel region.

For a given channel doping concentration, as the channel length is reduced, the depletion layer widths of source and drain junctions become comparable to channel length. The potential distribution in the channel now depends on both the tranverse field Ex(controlled by the gate voltage and back-surface bias) and the longitudinal field Ey(controlled by the drain bias). In other words, the potential distribution becomes two dimensional, and the gradual channel approximation (i.e. Ex >> Ey) is no longer valid. This two dimensional potential results in the degradation of the threshold behaviour, dependence of threshold voltage on the channel length & biasing voltages and failure of the current saturation due to punch through effect.

In further sections, we will study various effects due to short channel length in MOSFET.

Mobility is important because the current in MOSFET depends upon mobility of charge carriers(holes and electrons).

We can describe this mobility degradation by two effects : (i) Lateral Field Effect: In case of short channels, as the lateral field is increased, the channel mobility becomes field-dependent and eventually velocity saturation occurs (which was referred to in the previous lecture). This results in current saturation..

(ii) Vertical Field Effect: As the vertical electric field also increases on shrinking the channel lengths, it results in scattering of carriers near the surface. Hence the surface mobility reduces (Also explained by the mobility dependence equation given below).

Thus for short channels, we can see (in the figure 8.2) the mobility degradation which occurs due to velocity saturation and scattering of carriers.

An effect that is exacerbated by short channel designs is the subthreshold current which arises from the fact that some electrons are induced in the channel even before strong inversion is established. For the low electron concentration (typically of subthreshold regime), we expect diffusion current (propotional to carrier gradients) to dominate over drift currents (propotional to carrier concentrations). For very short channel lengths, such carrier diffusion from source to drain can make it impossible to turn off the device below threshold. The subthreshold current is made worse by the DIBL effect(will be explained in later sections) which increases the injection of electrons from the source.

In case of long channel MOSFETs, gate has control over the channel and supports most of the charge. As we go to short channel lengths as seen in the graph above, the threshold voltage begins to decrease as the charge in the depletion region is now supported by the drain and the source also. Thus the gate needs to support less charge in this region and as a result, VT falls down.This phenomenon is known as charge sharing effect.

Now since IDS is propotional to (VGS - VT), therefore as VT begins to fall in case of short channels, IDS starts increasing resulting in larger drain currents. Also when VGS is zero and the MOSFET is in the cut off mode, since VT is small, (VGS - VT) will be a small negative value and will result in leakage current which further multplied by the drain voltage will result in leakage power. In case of long channel MOSFETs, VT is large enough and (VGS - VT) is a comparatively larger negative value, in cut off mode leakage power is very small.

Figure 8.41: Dependence of VT on L for MOSFET

Transit Time: As seen in previous lecture, the short channel results in velocity saturation over part of the channel. So the argument used to derive the transit time for long channel MOSFET is no longer valid for short channel MOSFETs. We note that the transit time will be larger if electrons were moving at maximum speed all over the channel. Thus, 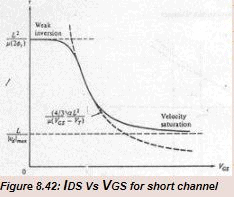 Figure 8.42 shows that the transit time of a device operating in the 'flat' part of IDS-VGS characteristics curve which concludes that transit time cannot be decreased by increasing further VGS.

Quantum Mechanical Increase Effect: Another effect of quantum mechanics that also increases with scaling, is a shift in the surface potential required for strong inversion. This effect arises from so called "energy quantization" of confined particles which preludes electrons and holes from existing at zero energy in the conduction or valence bands. It is a direct consequence of the coupled Poisson-Schrodinger equation solution. This surface potential shift manifests itself as an increase in |VT| which for the long devices is given by -

Above equation tells that |VT| increases as devices are scaled down. 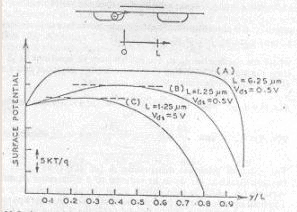 The source and drain depletion regions can intrude into the channel even without bias, as these junctions are brought closer together in short channel devices. This effect is called charge sharing (as mentioned earlier) since the source and drain in effect take part of the channel charge, which would otherwise be controlled by the gate. As the drain depletion region continues to increase with the bias, it can actually interact with the source to channel junction and hence lowers the potential barrier. This problem is known as Drain Induced Barrier Lowering (DIBL). When the source junction barrier is reduced, electrons are easily injected into the channel and the gate voltage has no longer any control over the drain current. In DIBL case,

For figure 8.5, we can observe that under extreme conditions of encroaching source and drain depletion regions, the two curves can meet.

Electric fields tend to be increased at smaller geometries, since device voltages are difficult to scale to arbitrarily small values. As a result, various hot carrier effects appear in short channel devices. The field in the reversed biased drain junction can lead to impact ionization and carrier multiplication. The resulting holes contribute to substrate current and some may move to the source, where they lower source barrier and result in electron injected from source into p-region. In fact n-p-n transistor can result within source channel drain configuration and prevent gate control of the current.

Another hot electron effect is the transport of the energetic electrons over (or tunneling through) the barrier into the oxide. Such electrons become trapped in the oxide, where they change the threshold voltage and I-V characteristics of the device. Hot electron effects can be reduced by reducing the doping in the source and drain regions, so that the junction fields are smaller. However lightly doped source and drain regions are incompatible with small geometry devices because of contact resistances and other similar problems. A compromise design of MOSFET, called Lightly Doped Drain(LDD), using two doping levels with heavy doping over most of the source and drain areas with light doping in a region adjecent to the channel. The LDD structure decreases the field between drain and channel regions, thereby reduces injection into the oxide, impact ionization and other hot electron effects.