The document Short & Long Answer Question (Part- 2) - The Solid State Notes | EduRev is a part of the Class 12 Course Chemistry Class 12.
All you need of Class 12 at this link: Class 12

Q.71. What is meant by co-ordination number in a solid?Ans. Number of nearest neighbours of a lattice point in a crystalline solid is called coordination number.Q.72. How will you differentiate between bcc and fee lattice?Ans. In bcc lattice, lattice points are at the corners as well as at the body centre. Z =2.Q.73. How will you differentiate between hcp and ccp lattice?Ans. If fee lattice, lattice points are at the corners as well as centre of all the six face centres Z = 4.Q.74. If the radius of anion in an ionic solids is 100 pm, what should be the radius of cation that fits in the (a) cubic hole, (b) octahedral hole, (c) tetrahedral hole?Ans. In hcp lattice each third layer is parallel to first it is ABAB ...........type. In ccp lattice each fourth layer is parallel to the first layer. It is ABCABC......... type.(a) For cubic hole r = 0.732 R(b) For octahedral hole r = 0.414 R(c) For tetrahedral hole r = 0.225 R.Q.75. What is the effect of Frenkel defect on electrical conductivity of solid?Ans. Frenkel defect increases electrical conductivity.Q.76. Name the non-stoichiometric point defects responsible for colour in alkali halides.Ans. Non-stoichiometric defect responsible for colour in alkali metal halide is metal excess (anion -vacancy) defect.Q.77. Schottky defects generate an equal number of cation and anion vacancies while doping produces only cation vacancies and not anion vacancies. Why?Ans. Schottky defects exist in pairs to maintain electrical neutrality. So it generates equal number of cation and anion vacancies. Ionic solids are doped with metal ions of higher valency. Therefore some cations of lower valency are displaced to maintain electrical neutrality. Hence only cation vacancies are produced not anion vacancies.Q.78. Give two reasons of crystal imperfections.Ans. Two reasons of crystal defects are :-(i) Improper growth of crystals at fast or moderate rate. (ii) Presence of impurities.Q.79. State the difference between Schottky and Frenkel defects.Ans. In Schottky defects cations and anions are missing from their normal sites in the ratio of formula of compounds.Q.80. Which of the two changes the density of solid?Ans. In Frenkel defects some ions are dislocated from normal site to some interstitial sites. Schottky defect decreases density of solid.Q.81. What makes alkali metal halides sometimes coloured which are otherwise colourless?Ans. Metal excess defect (anion vacancy) sometimes makes alkali metal halides coloured which are otherwise colourless.Q.82. What are the solids? What are their characteristics?Ans. General characteristics of solid state Matter exists in three different states:(i) Solid(ii) Liquid and(iii) Gas.In solids, constituent particles have fixed positions and they can only oscillate about their mean positions. This is why solids are rigid. The solids possess following characteristic properties :(i) Solids have definite mass, volume and shape. A solid is compact.(ii) They have very strong interparticle force.(iii) The constituent particles of a solid have fixed positions in space and they can only oscillate about their mean positions. They have no translational or rotational motion.(iv) Solids are rigid and incompressible. They can not flow.(v) Solids have many free surfaces.Q.83. What are amorphous and crystalline solids? Give example of each type.Ans. Classification of solids On the basis of arrangement of constituent particles solids are classified in two classes :Crystalline solids and Amorphous solids1. Crystalline solids -A solid which has definite ordered arrangement of constituent particles (atoms, molecules and ions) is called crystalline solid. (a) A crystalline solid consists of a large number of small crystals having a definite geometrical shape. These are known as unit cells.(b) It has long range ordered arrangement of constituent particles i.e. it has same pattern of arrangement throughout the crystal.(c) Arrangement of particles repeats itself periodically over the entire crystal.(d) Crystalline solids have sharp melting points.(e) Crystalline solids are anisotropic in nature. Examples of crystalline solids are sodium chloride, quartz, etc. 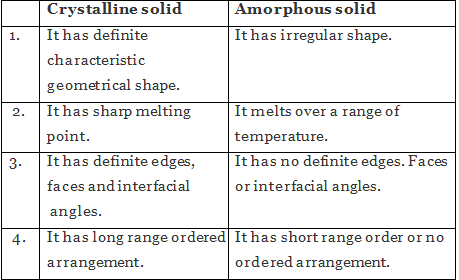 Q.91. What is the difference between London dispersion forces and dipole-dipole forces?Ans. Dipole-dipole forces arise between two polar molecules. London forces on the other hand result from the presence of temporary dipole moments caused by the unsymmetrical distribution of electrons.

Q.94. Gas lighter when pressed produces flame. Explain.Ans. Certain gas lighters consist of piezoelectric crystals. When pressure is applied, the displacement of constituents in the crystal takes place resulting in electric spark as a result of which fuel gas present in the lighter catches fire and flame is produced.

Q.95. Ferromagnetic and ferrimagnetic substances become paramagnetic upon heating. Discuss.Ans. When ferromagnetic and ferrimagnetic substances are heated to certain temperature called curie temperature they become paramagnetic. This is because of the realignment of the electron spins or their magnetic moments which are now oriented in one particular direction.

Q.97. CaCl2 will introduce schottky defect if added to AgCl crystal. Explain.Ans. Two Ag+ ions will be replaced by one Ca2+ ion to maintain electrical neutrality. A hole gets created in the lattice when every Ca2+ion is introduced. This leads to schottky defect.

Q.98. Why is common salt sometimes yellow instead of being white?Ans. The change in colour occurs due to the creation of anion vacancies. The Cl- ions leave the lattice and their place is taken up by the electrons. These electrons are known as F-centres and are responsible for the colour.

Q.99. Why are defects in the crystalline solids called thermodynamic defects?Ans. There is a perfect arrangement of constituent particles in a crystalline solid at OK. As the temperature increases, the particles are likely to leave their lattice sites and may occupy positions elsewhere. In other words, the defects are likely to increase with the rise in temperature. Therefore, these are called thermodynamic defects.

Q.100. Addition of CdCl2 to the crystals of AgCl will produce Schottky defects but the same is not produced when NaCI crystals are added. Discuss.Ans. When CdCl2 is added to the crystals of AgCl the replacement of one Ag+ ion with Cd2+ ion necessitates the removal of second Ag+ ion from the lattice to maintain the electrical neutrality of the crystal. However, the same does not take place in case of NaCI because both Ag+ and Na+ ions are monovalent. Thus, Schottky defects are caused by the addition of CdCl2 and not by NaCI.