(i) Solute - A substance which dissolves in another substance. Its state changes or it is present in smaller quantity.(ii) Solvent - A component of a solution that has the same physical state as a solution or which is present in larger quantities.

Q2. Is smoke a homogeneous solution?

No, smoke is a colloidal solution

Oil is a non-polar ester and water is a polar molecule. 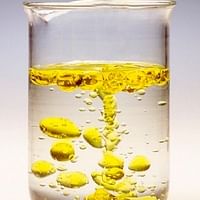 Q4. Benzene is soluble in toluene but not in water. Why?

Benzene is a non-polar molecule. Hence it is soluble in toluene which is also non-polar but it is insoluble in water which is polar.

Q6. Why does the molality of solution remain unchanged with temperature?

Because the mass of solute and solvent are independent of temperature.

Q7. Why is molality preferred over the molarity of the solution?

Because molality does not change with temperature.

Q8. How does the molarity of solution change with temperature?

With rising in temperature molarity decreases because the volume of the solution increases.

Q10. Why is vapour pressure of solution of glucose in water lower than that of pure water?

When glucose is dissolved in water, some of the glucose molecules displace water molecules from the surface. Therefore, the rate of evaporation of water decreases, hence vapour pressure decreases.

Q11. Name two factors on which the vapour pressure of the liquid depends.

Q13. Give an example of ideal solution.

Solution of benzene and toluene.

Q14. Give an example of a solution showing negative deviation from ideal behaviour.

Q15. Give an example of a solution showing positive deviation from ideal behaviour.

A solution of ethanol in water shows a positive deviation from ideal behaviour.

Q16. What type of solution is formed when chloroform is mixed with acetone?

When chloroform is mixed with acetone, it shows a negative deviation from ideal behaviour.

Q17. What type of solution is formed when ethanol is mixed with water?

When ethanol is mixed with water, the solution shows a positive deviation from ideal behaviour.

Q18. Give an example of solution which shows negative deviation from ideality.

Q19. Give an example of a solution which shows positive deviation from ideality.

Q21. What are minimum boiling azeotropes? Give an example.

A mixture of liquids which boils at a temperature lower than the boiling of both the components in pure state, e.g. Ethanol and water.

Q22. What type of behaviour is expected when water is added to sulphuric acid?

Q23. What is antifreeze?

Antifreeze is a liquid which is added to another liquid prevent its freezing at normal freezing point, e.g. Glycol in water.

Those properties which depend upon number of solute particles only and not on nature of solute are called colligative properties.

Q25. Why does the boiling point of a solution increase on adding non-volatile solute?

Q26. Why does the freezing of a solution decrease on adding non-volatile solute?

On adding non-volatile solute to a liquid its vapour pressure decreases, hence the freezing point decreases.

Q27. On what factor does the elevation in boiling point depend?

The number of solute particles.

Q28. On what factors does depression in freezing point depend?'.

Q29. How does the boiling point of a liquid change with external pressure?

The boiling point of the liquid increases with increasing external pressure.

Q30. What change is observed in the boiling point of a liquid at a higher altitude?

At a higher altitude boiling point of liquid decreases.

The process of flow of solvent molecules through a semipermeable membrane from a dilute solution to a concentrated solution.

Q33. State how does osmotic pressure vary with temperature?

Q34. How does osmotic pressure depend upon number of moles of solute particles?

Osmotic pressure is directly proportional to the number of solute particles. at constant 'V" and 'T'.

Q35. Doctors advise gargles by saline water in case of sore throat Why?

Saline water is a hypertonic solution therefore fluids responsible for irritation in throat will come out.

Q36. What is reverse osmosis?

The flow of solvent from solution side to solvent side separated by the semi-permeable membrane is called reverse osmosis. It occurs when external pressure higher than the osmotic pressure is applied on the solution side.

Q37. What is the use of reverse osmosis?

Reverse osmosis is used for the desalination of saline water.

Q38. What are isotonic solutions?

Solutions having the same osmotic pressure are called isotonic solutions.

Q41. When is the value of Van't Hoff factor more than one?

When solute undergoes dissociation in solution e.g. electrolytes like NaCI.

Q42. When is the value of Van't Hoff factor less than one?

When the solute molecules undergo association in solution Example: Acetic acid in benzene.

Q43. Name the colligative property mostly used for the determination of molecular mass of macromolecules.

Q44. Which will have a greater boiling point (i) 1 M urea solution(ii) 1 M NaCI solution

KCl is an electrolyte, it undergoes dissociation in solution, hence number of particles increases. Urea is non-electrolyte.

Q46. Differentiate between molarity and molality of solution.

Q47. Give an example each of miscible liquid pairs showing positive and negative deviations from Raoult's law. Give reasons for each such deviation.

The pressure exerted by gas molecules on its liquid layer at equilibrium is called vapour pressure.(i) When volatile liquid is added to another liquid then the resultant vapour pressure may increase, decrease or may remain the same depending on the strength of solute-solvent interaction.(ii) Net vapour pressure decreases when non-volatile solute is added to it.

Q49. Explain why freezing point of a solvent is lowered on dissolving a non-volatile solute in it. Give an important application of freezing point depression.

When a non-volatile solute is dissolved in a solvent its vapour pressure' decreases. Hence, the vapour pressure of solvent and solution becomes equal at a lower temperature. Application of freezing point depression - To prepare antifreeze mixture used in radiators of vehicles.

Q50. Why dried fruits and vegetables slowly swell when placed in water? What will be the effect of temperature in this process?

When dried fruits and vegetables are placed in water they swell due to flow of water into them by osmosis. Increasing temperature speeds up the process.