The document Short Notes - Cell - Structure and Functions, Science, Class 8 Class 8 Notes | EduRev is a part of the Class 8 Course Class 8 Science by VP Classes.
All you need of Class 8 at this link: Class 8 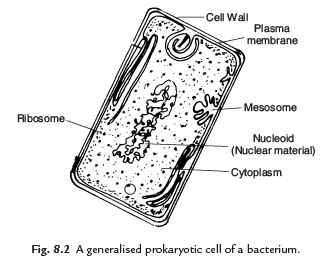 Content of the Nucleus: Inside the nucleus, a spherical body is present, which can be seen under high magnification of microscope, called nucleus. Nuclear material contains thread-like structures called chromosomes. The chromosomes can be seen only when the cell divides. Functions of Nucleus: (a) It acts as a control centre of all the activities of the cell.
(b) It helps in inheritance of character of parents (both father and mother) to the offspring.

In plants, green parts like leaves, plastids contain green pigment called chlorophyll. Chlorophyll containing plastids are called chloroplasts. They provide green colour to leaves or other parts of plants. Chlorophyll in the chloroplasts of leaves is essential for photosynthesis (that prepares food for the plant in presence of sunlight).