The document Short Notes - Combustion and Flame, Science, Class 8 Class 8 Notes | EduRev is a part of the Class 8 Course Science Class 8.
All you need of Class 8 at this link: Class 8

In case of electrical fires, water may cause a shock to people fighting with fire.

(e) For fires involving electrical equipment and inflammable materials such as petrol, carbon dioxide (CO2) is the best extinguisher. Carbon dioxide (CO2), being heavier than oxygen, covers the fire like a blanket. As the contact between the fuel and oxygen is cut off, the fire is controlled. Compressed CO2 stored in a cylinder when released on a fire causes
(i) formation of a blanket around the fire
(ii) cools down the temperature of the fuel.
CO2 does not harm electrical equipment.

The flame has three distinct zones:

(i) Black zone: It is the innermost zone of unburnt vapours.

(ii) Bright and Luminous (yellow) zone: It is the middle zone. Brightness of this zone is due to the glow of unburnt carbon particles.

(iii) Blue zone: It is the outer zone of complete combustion. It is the hottest and non‑luminous zone. 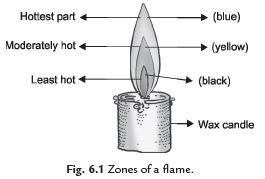 That is why a block of wood or a log does not burn easily. On splitting the block of wood, its pieces gives larger surface, so combustion becomes easier.

There is probably any fuel that could be considered as an ideal fuel.

Oxides of sulphur and nitrogen dissolve in rain water and form acids. Such rain is called acid rain. Acid rain is very harmful for crops, buildings and soil.