The document Short Notes - Diversity in Living Organisms Class 9 Notes | EduRev is a part of the Class 9 Course Class 9 Science by VP Classes.
All you need of Class 9 at this link: Class 9

Heterotrophs: Organisms dependent on either plants or animals are called heterotrophs. They don’t have chlorophyll. All animals, fungi and certain bacteria and protozoa belong to this group.(d) Level of Organisation in Body In multicellular organisms which are small, like hydra particular group of cells are assigned a particular function. But in larger organisms, tissues group to form an organ, which in turn make organ system. For example, in human beings there are separate systems for performing specific tasks.Even in larger plants there is separate root system for conduction of water and minerals, leaf for photosynthesis and flowers for reproduction.Based on these characters organisms can be further classified into various sub-groups. 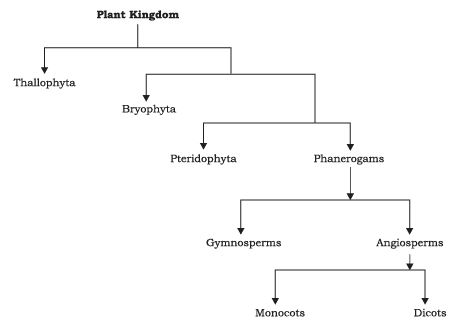 Vertebrates are grouped into five classes:

(i) Pisces – Body is streamlined and has fins and tail for swimming.– Skin is covered with scales.– Skeleton can be made of bone or cartilage.– Intake of oxygen is by gills.– Cold-blooded animals.– Two-chambered heart is present.– Examples: Fishes like Rohu, Tuna, Shark

(ii) Amphibia – They are adapted to live both on land and water.– Respiration is through either gills or lungs.– Three-chambered heart is present.– Examples: Frogs, Toads, Salamander

(iii) Reptilia – These are crawling animals.– Skin is rough and modified to withstand extreme temperatures.– Heart is three chambered in most, while four chambered in crocodiles.– Cold-blooded animals.– Examples: Lizards, Turtles, Snakes(iv) Aves – Body is covered with feathers and forelimbs are modified for flying.– Breathing is through lungs.– Warm blooded animals.– Four-chambered heart is present.– Examples: Sparrow, Eagle, Crow, Parrot(v) Mammalia – Mammary glands are present which produce milk to nurture young ones.– Skin is covered with hairs and has sweat glands and sebaceous (oil) glands.– Warm-blooded animals with four-chambered heart.– Most animals are viviparous (giving birth to live young ones), some are oviparous (producing eggs).– Examples: Man, Horse, Kangaroo, Lion