The document Short Notes - People as Resources, Class 8, SST Notes - Class 8 is a part of Class 8 category.
All you need of Class 8 at this link: Class 8

Meaning of Human Resources: People as Resource' is a way of referring to a country’s working people in terms of their existing productive skills and abilities. Looking at the population from this productive aspect emphasizes its ability to contribute to the creation of the Gross National Product. Like other resources population also is a resource — a 'human resource'. This is the positive side of a large population that is often overlooked when we look only at the negative side, considering only the problems of providing the population with food, education and access to health facilities.

When the existing 'human resource' is further developed by becoming more educated and healthy, we call it 'human capital formation' that adds to the productive power of the country just like 'physical capital formation'. Investment in human capital (through education, training, medical care) yields a return just like investment in physical capital. This can be seen directly in the form of higher incomes earned because of higher productivity of the more educated or the better trained persons, as well as the higher productivity of healthier people. 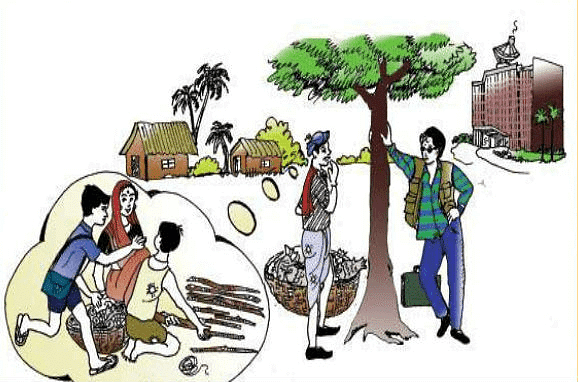 Economic Activities by Men and Women

The various activities have been classified into three main sectors i.e., primary, secondary and tertiary.

Tertiary sector:- Trade, transport, communication, banking, education, health, tourism, services, insurance etc. are included in the tertiary sector. The activities in this sector result in the production of goods and services.

Market activities:- It involve remuneration to any one who performs i.e., activity performed for pay or profit. These include production of goods or services including government service.

Non-market activities are the production for self-consumption. These can be consumption and processing of primary product and own account production of fixed assets.

Education is an important input for the growth. It opens new horizon, provides new aspiration and develops values of life. Education contributes towards the growth of society also. It enhances the national income, cultural richness and increases the efficiency of governance. There is a provision made for providing universal access, retention and quality in elementary education with a special emphasis on girls. There is also an establishment of pace setting of schools like Navodaya Vidyalaya in each district. Vocational streams have been developed to equip large number of high school students with occupations related to knowledge and skills. The expenditure on education as a percentage of GDP rose from 0.64% in 1951–52 to 3.98% in 2002–03 (Budgetary estimate). The literacy rates have increased from 18% in 1951 to 65% in 2001. Literacy is not only a right, it is also needed if the citizen are to perform their duties and enjoy their right properly.

The health of a person helps him to realise his potential and the ability to fight illness. An unhealthy person becomes a liability for an organization indeed; health is an indispensable basis for realising one’s well being. Henceforth, improvement in the health status of the population has been the priority of the country. Our national policy, too, aimed at improving the accessibility of health care, family welfare and nutritional service with special focus on underprivileged segment of population. Over the last five decades India has built up a vast health infrastructure and man power required at primary secondary and tertiary care in Government as well as in the private sector.

Unemployment is said to exist when people who are willing to work at the going wages cannot find jobs. The workforce population includes people from 15 years to 59 years.

Seasonal unemployment happens when people are not able to find jobs during some months of the year. People dependant upon agriculture usually faces such kind of problem. There are certain busy seasons when sowing, harvesting, weeding, threshing is done. Certain months do not provide much work to the people dependant on agriculture.

In case of disguised unemployment people appear to be employed. They have agricultural plot where they find work. This usually happens among family members engaged in agricultural activity. The work requires the service of five people but engages eight people. Three people are extra. These three people also work in the same plot as five people. The contribution made by the three extra people does not add to the contribution made by the five people. If three people are removed the productivity of the field will not decline. The field requires the service of five people and the three extra people are disguisedly employed. Increase in unemployment is an indicator of a depressed economy. It also wastes the resource, which could have been gainfully employed.

The document Short Notes - People as Resources, Class 8, SST Notes - Class 8 is a part of Class 8 category.
All you need of Class 8 at this link: Class 8