The document Facts that Matter - Reaching the Age of Adolescence Class 8 Notes | EduRev is a part of the Class 8 Course Class 8 Science by VP Classes.
All you need of Class 8 at this link: Class 8

For example: A girl is 9 years old and 120 cm tall. At the end of the growth period she is likely to be

In Girls, larynx is hardly visible (Adam’s apple not visible). They have pitched voice.

In girls, the region below the waist becomes wider. The muscles also comparatively grow less. 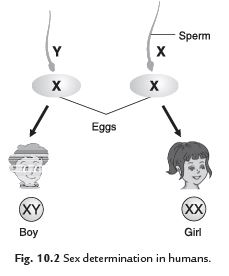 • Hormones other than Sex Harmones