The document Short Notes - The Fundamental Unit of Life Class 9 Notes | EduRev is a part of the Class 9 Course Class 9 Science by VP Classes.
All you need of Class 9 at this link: Class 9 Fig: Cells can have different Shaped and Sizes

There are two types of cells → plant cell and animal cell. The different cell organelles and their functions are as follows:

1. Plasma/Cell membrane: This is the outermost covering of the cell that separates the contents of the cell from its external environment. The plasma membrane allows or permits the entry and exit of some materials in and out of the cell so the cell membrane is called as selectively permeable membrane.

If the medium surrounding the cell has a higher water concentration than the cell, the cell will gain water by osmosis. Such a solution is known as a hypotonic solution.

If the medium has exactly the same water concentration as the cell, there will be no net movement of water across the cell membrane. Such a solution is known as an isotonic solution.

If the medium has a lower water concentration than the cell, it will lose water by osmosis. Such a solution is known as hypertonic solution.

The plasma membrane is flexible and is made up of organic molecules called lipids and proteins. The flexibility of cell membrane also enables the cell to engulf in food and other material from its external environment. Such process is known as endocytosis. It is observed in Amoeba.

2. Cell wall (Protective wall): Plants cells, in addition to the plasma membrane have another rigid outer covering called cell wall. The cell wall lies outside the plasma membrane. The plant cell wall is mainly composed of cellulose. It is a complex substance and provides structural strength to plant cells. When a living plant loses water through osmosis there is shrinkage or contraction of contents of the cell away from cell wall. This phenomenon is known as plasmolysis.

3. Nucleus (Brain of a cell): The nucleus has a double-layered covering called nuclear membrane. The nuclear membrane has pores which allow the transfer of material from inside the nucleus to its outside, i.e., to the cytoplasm.The nucleus contains chromosomes, which are visible as rod-shaped structures only when the cell is about to divide. Chromosomes contain information for inheritance of features from parents to next generation in form of DNA [Deoxyribo Nucleic Acid) molecules. Chromosomes are composed of DNA and protein. Functional segments of DNA are called genes. The nucleus plays a central role in cellular reproduction. 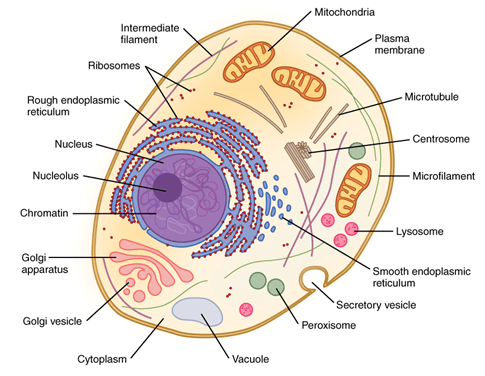 Fig: Nucleus of a Cell

Prokaryotic Cells: In some organisms like bacteria, the nuclear material is not enclosed by nuclear membrane and membrane bound cell organelle are absent. Such nucleus is called nucleoid and such cells are known as prokaryotic cell. Such cells have single chromosome.

Eukaryotic Cells: Cells having well defined nucleus and having membrane bound cell organelles is termed as eukaryotic cell. Such cells have more than one chromosomes.

4. Cytoplasm: The cytoplasm is the fluid content inside the plasma membrane. It also contains many specialised cell organelles. Each of these organelles performs a specific function for the cell.

5. Cell Organelles: Every cell has a membrane around it to keep its content separate from the external environment. The different components of cell perform different functions and these components are called cell organelles. (i) Endoplasmic Reticulum (ER) (Channels, Network for transport): The ER is a large network of membrane-bound tubes and sheets. It looks like long tubules or round or oblong bags. 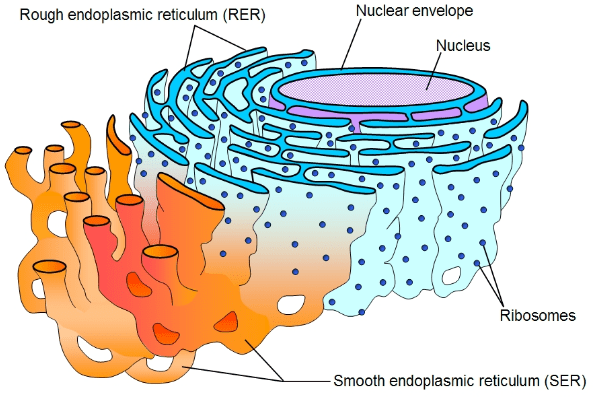 There are two types of ER–Rough endoplasmic reticulum [RER] and smooth endoplasmic reticulum [SER]. RER has particles called ribosomes attached to its surface. The ribosomes are the sites of protein manufacturing.The SER helps in the manufacture of fat molecules, or lipids, important for cell function. Some of these proteins and lipids help in building the cell membrane. This process is known as membrane biogenesis. Some other proteins and lipids function as enzymes and hormones.

Fig: The Structure of Cells in Plants and Animals

The one function of ER is to serve as channels for the transport of materials between various regions of the cytoplasm or between the cytoplasm and the nucleus. The ER also functions as a cytoplasmic framework providing a surface for some of the biochemical activities of the cell. The material synthesised near the ER is packaged and dispatched to various targets inside and outside the cell through the Golgi apparatus. Its function include the storage, modification and packages of products in vesicles. In some cases complex sugar may be made from simple sugars in the Golgi apparatus. It is also involved in the formation of lysosomes.

(iii) Lysosomes [Suicide bags] (Cleanliness of cell): Lysosomes are a kind of waste dispatch and disposal system of the cell. Lysosomes help to keep the cell clean by digesting any foreign material as well as worn-out cell organelles. Foreign materials entering the cells such as bacteria or food, as well as old organelles, end up in the lysosomes, which break them up into small pieces. They are able to do this because they contain powerful digestive enzymes capable of breaking down all organic material. Under abnormal condition, when the cell gets damaged, lysosomes may burst and the enzymes digest their own cell. Therefore, they are also known as “suicide bags”. The energy required for various chemical activities needed for life is released by mitochondria in the form of ATP [Adenosine triphosphate] molecules. ATP is known as energy currency of the cell. Mitochondria have two membrane coverings instead of just one. The outer membrane is very porous while the inner membrane is deeply folded. They are able to make some of their own protein.

(v) Plastids: Plastids are present only in plant cells. 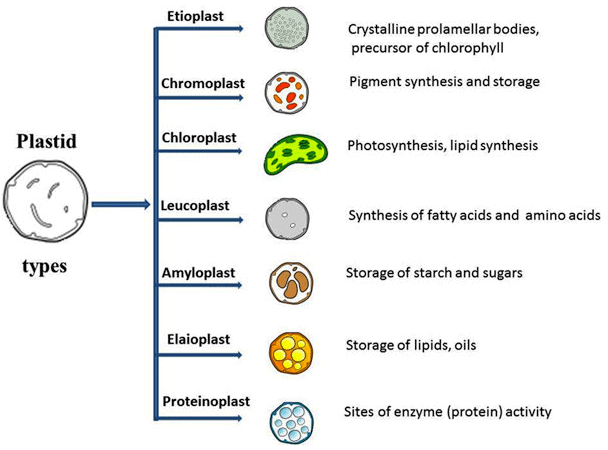 There are two types of plastids—chromoplasts and leucoplasts. Chromoplasts are the coloured plastids present in leaves, flowers and fruits. Plastids containing the pigment chlorophyll are known as chloroplasts. They are important for photosynthesis in plants. Chloroplasts also contain various yellow or orange pigments in addition to chlorophyll. Leucoplasts are found primarily in organelles in which materials such as starch, oils and protein granules are stored.The internal organisation of the plastids consists of numerous membrane layers embedded in a material called stroma. Plastids are similar to mitochondria in external structure. Plastids have their own DNA and ribosomes. Fig: Vacuoles in plant cellsIn plant cells, vacuoles are full of cell sap and provide turgidity and rigidity to the cell. In Amoeba, the food vacuole contains the food items that is consumed by it and contractile vacuoles expel excess water and some wastes from the cell.