The line connecting any two non-consecutive vertices is called a diagonal. Convex polygons have no portion of their diagonals in their exteriors. Thus a polygon each of whose interior angles is less than 180°, is called a convex polygon, otherwise it is concave polygon.

In the figure, PQRS is an isosceles trapezium in which PQ || RS and non-parallel sides PS = QR.

A kite is a quadrilateral having two distinct consecutive pairs of sides of equal lengths. In the figure ABCD is a kite having AB = AC and BD = CD. 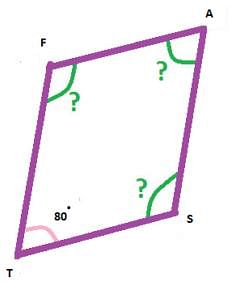 Solution: FAST is a parallelogram. Let us first recollect the angle related properties of a parallelogram.Opposite angles are equal.Adjacent angles are supplementary.Using the first property, let us find the value of  ∠FAS∠FAS is opposite to ∠FTS, so ∠FAS shall be 80° 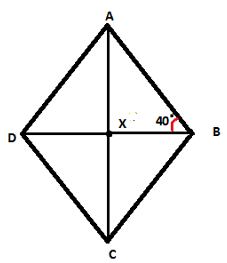 c) ∠AXB is formed by the diagonal that perpendicularly bisect each other, therefor ∠AXB is 90°.