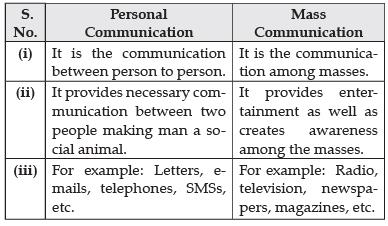 Q. 46. What do you mean by ‘communication?’ Ans. Two-way process of reaching mutual understanding, in which participants not only exchange information, news, ideas, and feelings but also create and share meaning. In general, communication is a means of connecting people or places. In business, it is a key function of management. An organisation cannot operate without communication between levels, department and employees.
Communication can be of many types:(i) Verbal communication(ii) Written communication(iii) Non-verbal communication.