The document Short and Long Answer Questions- The Fundamental Unit Of Life Class 9 Notes | EduRev is a part of the Class 9 Course Science Class 9.
All you need of Class 9 at this link: Class 9

Ques 1: What are plastids? Name the different types of plastids found in plant cell.Ans: Plastids are organelles found only in plants. They are:(a) Chloroplast-Containing chlorophyll(b) Chromoplast-Containing carotenoids and xanthophyll (coloured plastids)(c) Leucoplast-Wllite or colourless plastids

Ques 9: What is diffusion?Ans: When gases like C02, 02, move across the cell membrane, this process is called diffusion.

Ques 11: What is the full form of DNA?Ans: DNA —> Deoxyribo Nucleic Acid.

Ques 12: What is the Junction of chromosome?Answer: Chromosomes contain information for the inheritance of features from parents to next generation in the form of DNA molecules.

Ques 14: What is the energy currency of the cell?Ans: ATP—Adenosine Triphosphate.

Ques 15: What is the function of ribosome?Ans: Ribosomes help in protein synthesis.

Ques 18: Name the cell organelle which helps in the transportation of material.Ans: Endoplasmic reticulum.

Ques 19: Name the cell organelle due to which leaves, flowers and fruits get their colour.Ans: Chromoplast.

Ques 20: Name the cell organelle which helps in the formation of lysosome.Ans: Golgi apparatus.

Ques 21: Name the cleansing organelle in the cell.Ans: Lysosomes.

Ques 25: What are cisterns?Ans: The golgi bodies consist Of a system of membrane-bound vesicles arranged in stacks called cisterns.

Short Answer Type QuestionsQues 1: State two conditions required for osmosis.Ans: (i) The difference in the concentration of water, one should have higher concentration than the other.(ii) Semi-permeable membrane is also required through which water will flow.

Ques 2: What is plasmolysis?Ans: When a living plant cell loses water through osmosis there is shrinkage or contraction of the contents of the cell away from the cell wall. This phenomenon is known as plasmolysis.

Ques 7: What is endocytosis?Ans: The cell membranes flexibility allows the cell engulf in food and other material from its external environment. This process is known as endocytosis. E.g., Amoeba acquires its food through such processes.

Ques 8: What is the function of vacuoles?Ans: Vacuoles are storage sacs for solid or liquid content. In plant cells it provides turgidity and rigidity to the cell. In single-celled organisms vacuoles store food, e.g., Amoeba.

Ques 9: When we put raisins in water, why do they swell?Ans: Raisins are dry with less water inside, when they are kept in water, osmosis takes place, water flows through the cell wall, cell membrane of the raisins and therefore it swells.

Ques 10: Why are lysosomes called suicidal bags?Ans: Lysosomes contain digestive enzymes in it and helps in the cleaning of cell by digesting any foreign materials entering the cell, such as bacteria, food and old cell organelles.When the lysosomes burst, the digestive enzyme digest its own cell. Hence it is called as suicidal bag.

Ques 11: What is nucleoid? Ans: The nuclear region in some cells are poorly defined due to the absence of a nuclear membrane, it contains only nucleic acid. This undefined nuclear region with nucleic acid in it is called nucleoid.

Ques 13: Label the figure and answer the questions:(i) A – It is the packaging organelle(ii) B – Provides energy(iii) C – helps in the transport of material(iv) D – Carries the information. 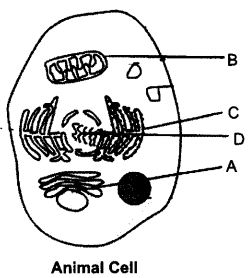 Ques 14: What is the function of nucleus in a cell?Ans: The nucleus plays a very important role in the reproduction of cells. It also helps the single cell to divide and form two new daughter cells.It plays an important role in determining how the cell will develop and what form it will exhibit at maturity, by directing the chemical activities of the cell.

Ques 15: What is the Junction of plastids?Ans: Plastids are present only in plant cells. There are two types of plastids chromoplasts (coloured plastids) and leucoplasts (white or colourless)Chromoplast—Consists of coloured pigments and gives different colours to flowers, fruits and leaves. The green colour pigment present in leaf is called chlorophyll which helps in the photosynthesis and a plastid with chlorophyll is called chloroplast.Leucoplast—It stores starch, oil and protein granules in it.

Ques 17: Explain the structure and function of Golgi bodies.Ans: Structures: Golgi bodies consist of a system of membrane-bound vesicles arranged in stacks parallel to each other called cisterns. These membranes have connections with the membrane of endoplasmic reticulum (ER).Functions:(1) The material synthesised near the ER is packaged and dispatched to various target inside and outside the cell through Golgi apparatus.(2) It also stores, modifies and helps in the packaging of products in vesicles.(3) In some cases, complex sugars may be made from simple sugars in it.(4) It also helps in the formation of lysosomes.

Ques 18: What are ribosomes? Where are they located in the cell? What is their function?Ans: Ribosomes are spherical organelles present in the cell which are either freely distributed in the cytoplasm or may be attached to the endoplasmic reticulum.It consists of ribosomal RNA (Ribonucleic acid) and proteins.Functions of Ribosomes: It helps in the synthesis of proteins.

Ques 19: What is the difference in chromatin, chromosomes and gene?Ans: (1) Chromatin: It is a fine network of thread-like structure made up of DNA or RNA. It gets condense to form chromosomes.(2) Chromosome: The chromosomes are made from chromatin material and are located iri the cell.(3) Genes are found in chromosomes.

Ques 20: Why do plant cells have more in number and big-sized vacuoles as compared to the animal cells?Ans: Plant cells attain turgidity and rigidity due to the more number of vacuoles as well as large-sized vacuoles help the plant cells to withstand the wear and tear, external environmental conditions.They also help in the storage of essential material required by plants for their growth like amino acids, sugar and various organic substances.

Ques 21: Explain the following terms:(a) Plasma membrane(b) Cytoplasm(c) Nucleus.Ans: (a) Plasma membrane: It is a thin membrane which controls the passage of materials in and out of the cell. It is also called as selectively permeable membrane. It makes the outer boundary of the cell and is made up of lipo-protein,(b) Cytoplasm: It is transparent jelly-like thick substance present in the cell. It makes the ground of the cell in which all the cell organelles are suspended.(c) Nucleus: It is a double-layered membrane structure which contains chromosomes required for the inheritance of characteristics from one generation to the other.

Ques 24: What are genes?Ans: Gene is a segment of DNA. They are located on chromosomes in linear fashions. One gene may perform one or more function. Genes are carrier of genetic codes. 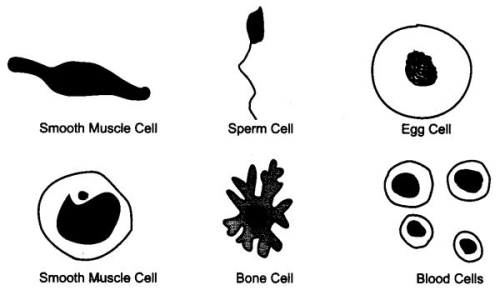 Ques 2: Give five points of differences between prokaryotic cell and eukaryotic cell.Ans:

Ques 3: Draw a neat labelled diagram of plant cell and label its parts.Ans: 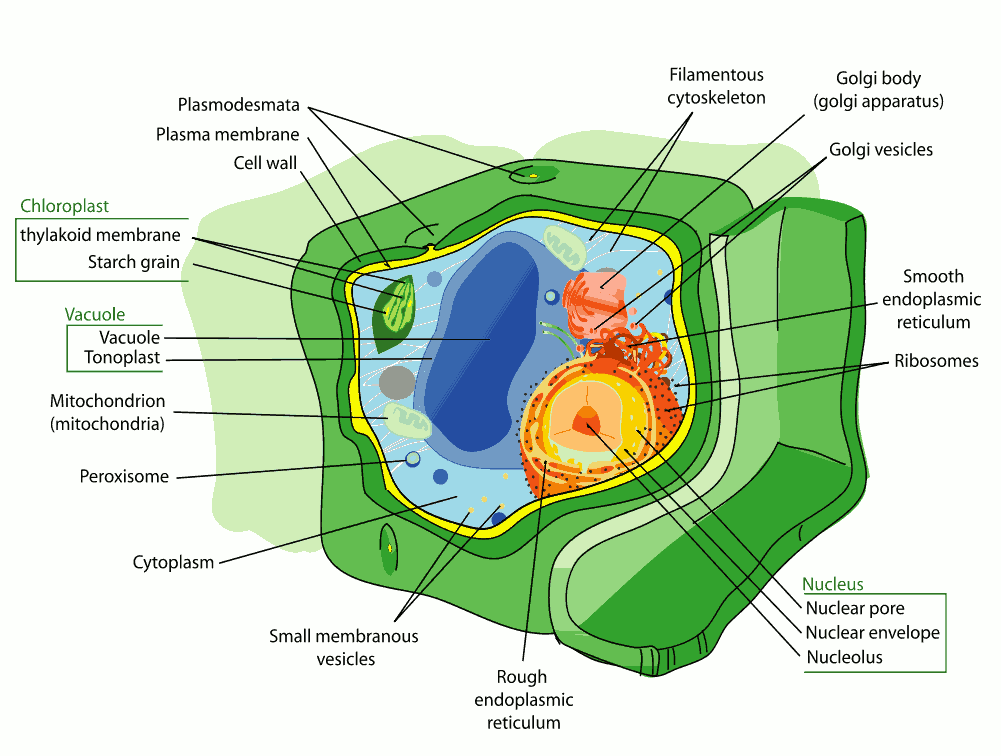 Ques 5: Name the cell organelle for the following:(a) Present only in plant cell, provides strength and rigidity to the cell.(b) It is the site for lipids synthesis and helps in detoxification of drugs.(c) The inner membrane is folded to form cristae, it has its own DNA and proteins.(d) It helps in the formation of lysosomes.(e) It imparts colour to the fruit and flowers.Ans: (a) Cell wall(b) Smooth endoplasmic reticulum(c) Mitochondria(d) Golgi apparatus(e) Chromoplast

Value-Based QuestionsQues 1: Vasu was helping his mother in laying the table when they had some guest for dinner. Vasu was about to sprinkle salt on salad for dressing. His mother stopped him from doing so and told him that it is too early to sprinkle salt on the salad, he should do so only when they are seated for having the dinner.(a) What would happen if salt is sprinkled on the salad?(b) Which property of cells is seen in adding salt to it?(c) What value of Vasu is seen?Ans: (a) On sprinkling of some salt on the salad, the salad will release water.(b) The salt outside the salad acts as hypertonic solution as it has less water concentration and therefore the cell looses water by osmosis.(c) Vasu showed the value of being very helpful, caring and responsible.

Ques 2: Anu is a five year old girl who joined the swimming classes. After the first class she was worried when she saw her wrinkled fingers. She asked her elder sister about the wrinkling and shrinking of her fingers. Her sister explained Anu why it was so.(a) Why did the fingers wrinkle after swimming?(b) What caused the shrinking/wrinkling of fingers?(c) What value of Anu is seen in the above cast?Ans: (a) Fingers wrinkled because the cells of the skin lost some water.(b) This happened because of the difference in the concentration of water in the skin cells and swimming pool’s water.(c) Anu showed the value of aware citizen and a good learner who clarifies the doubts.

Ques 3: Two sailors got marooned on the island, both of them were very thirsty and one of the sailors tried to drink sea water. The other sailor immediately stopped him from drinking the salty water of sea and suggested to wait for some help, stay calm and patient.(a) What would happen if the sailor drinks salty water?(b) What is osmosis?(c) What value of sailors is reflected in the above act?Ans: (a) On drinking sally water, exosmosis in the intestine will cause dehydration and vomiting.(b) The movement of water molecules through a permeable membrane is called osmosis.(c) Sailors showed the value of being patient, composed, empathy and determination.

Ques 4: Sachin’s mother wanted to use some eggs for incubation. Sachin helped his mother in separating rotten and spoilt eggs from the good ones. He took a bucket of water to separate them.(a) How can one separate the rotten eggs from the good ones using water?(b) What is the shell of egg made up of?(c) What value of Sachin is seen in this act?Ans: (a) We can separate the rotten eggs by dipping them in water. The eggs that will float in water are rotten eggs and the one that sinks are good one.(b) Egg shell is made up of calcium carbonate.(c) Sachin showed the value of being helpful, responsible behaviour.