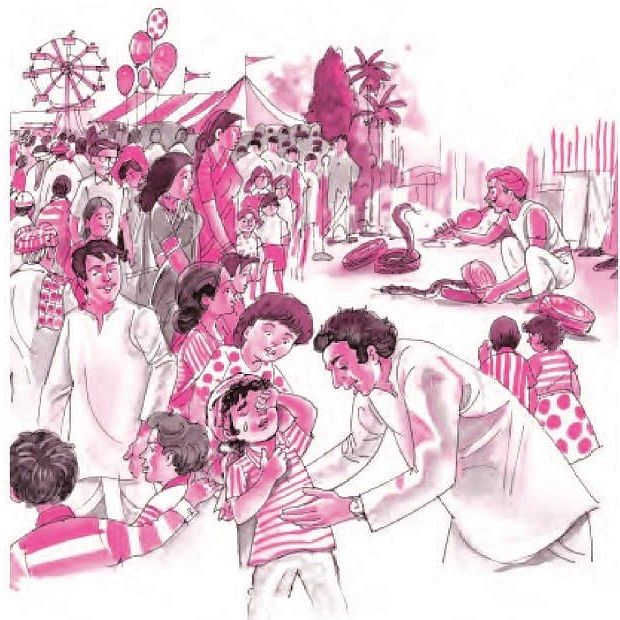 Ques 2: Where did the child go with his parents ? What did he want there ?Ans: The child went to a fair with his parents. He wanted garlands, balloons and sweets over there. He also wanted to see the snake and take a ride on the swing.
Ques 3: Why did the lost child refuse to take his favourite things in the fair after losing his parents ?Ans: The child refused to take his favourite things in the fair after he lost his parents as he missed them and wanted to meet them only. Now, he had lost interest in all his favourite things.
Ques 4: How did the mother distract the child’s mind from the toy seller ?Ans: The mother distracted the child’s mind from the toy seller by pointing towards a flowering mustard field. He saw colourful dragon flies and staffed running after them.
Ques 5: How was the child separated from his parents ?Ans: The boy was attracted to toys, balloons and sweets in the fair. He got fascinated with the flute music being played by the snake charmer. While watching the roundabout swing he got separated from his parents.
Ques 6: What happened when the lost child reached the temple door ?Ans: When the child reached the temple door men jostled each other. The poor child struggled to thrust his way out but was knocked. He might have been trampled if he had not shouted at his highest pitch.
Ques 7: Who rescued the lost child ? What did he offer to buy him ? Ans: The man in the shrine rescued the lost child. He lifted him up in his arms and tried to soothe him. He took him to the nearest roundabout swing and offered to buy him flowers, balloons and sheets.
Ques 8: Parents were in a hurry to reach the fair but the child was delaying them. How ?Ans: The boy got distracted by toys which he wanted to buy, butterflies and dragon flies which he wanted to catch and flowers that he wanted to gather. And, out of pine innocence he delayed his parents to reach the fair.
Ques 9: What was the first reaction of the child when he realized that he had lost his parents?Ans: The child panicked when he realized that he had lost his parents. He was puzzled, angry and desperate. He cried and shouted for his parents. He ran here and there to look for his parents.
Ques 10: Why didn’t the boy wait for an answer after he had pleaded for sweets ?Ans: The boy didn’t wait for an answer after life had pleaded for sweets because he knew that his parents would say that he was greedy and would refuse to buy the sweets.Ques 11: What happened when the “lost child” entered the grove ? How did he enjoy it there ?Ans:When the “lost child” entered the grove, a shower of young flowers fell upon him. He began to gather the raining petals. He heard the cooing of doves and ran towards his parents. He had a fun- filled splendid time in the grove.

Ques 1: What changes do you notice in the behaviour of the child, once he is separated from his parents in the story “The Lost Child” ? Ans: A child along with his parents had been to a fair. He was very excited and happy with the stalls of toys and sweets. He gets separated from his parents and starts crying. He runs hither and thither in search of his parents, but in vain. Since the place was overcrowded he got really scared. He started crying as he was all alone. A kind hearted man offers him many things but he refuses. The child who wanted everything from the fair was now not interested in any of these things as he only yearned to be with his parents.
Ques 2: Compare the attitude of the child before and after his separation from his parents.Ans: Before separation the child was very happy and excited at the fair. He was fascinated with all the things that were displayed at the stalls. He wanted to have all the things like his favourite toys, sweets, flowers, etc. He also wanted to go for a ride. But after separation the boy just wanted to be with his parents. He was not interested in any of those things which he kept longing to have from the stalls. In the absence of his parents these things did not give him any satisfaction.
Ques 3: How did the man who found the little boy in the fair, try to soothe him ?Ans: The man who found the little boy in the fair tried every possible way to soothe him. He took him to a roundabout swing then offered a horse ride, tried to make him listen to the snake charmer’s song and offered him a balloon, as he thought that this would distract his mind, but in vain. He offered him flowers and sweets, but the child kept crying. The child could not be distracted by any of the things at the fair as he longed to be with his parents.
Ques 4: How do you know that the lost child was a nature – lover ?Ans: The child was attracted to nature’s little aspects because of his innocence. When his mother diverted his attention towards the mustard field he saw the flowers which were in the nascent stage and flowering. The flowers of the field were pale like melting gold. He then saw a group of dragon flies which were bustling about on their gandy purple wings, intercepting the flight of a lone black bee or butterfly in search of sweetness from the flowers. The child wanted to catch those dragons this but they went away fluttering and flapping. He also got attracted to the little insects and worms along the footpath that were teeming out from their hiding places to enjoy the Sunshine. A shower of young flowers fell upon the child as he entered the fair. He forgot about his parents and began to gather the raining petals in his hands. Again when he heard the cooing of doves, he ran towards his parents shouting about them.
Ques 5: What all things did the child get attracted to, once entered the fair ? Was he able to get all the things he desired ? What happened when he made a bold request to his parents ?Ans: With a wide mouth, he stared at the sight of burfi. Later he was attracted to a garland of gulmohur and was carried away by the rainbow glory of the coloured balloons. He wanted them all but, on the other hand, he also knew the answers of his parents, so he convinced himself and did not ask them for anything. Finally, he made a bold request for going on the roundabout. As he turned to get their reply, he could not find them behind him.
The document Short and Long Answer Ques - The Lost Child Notes | Study English Class 9 - Class 9 is a part of the Class 9 Course English Class 9.
All you need of Class 9 at this link: Class 9
Join Course