Q1: Why is the Northern Hemisphere called the land Hemisphere?

Q2: How does the atmosphere act as a blanket?

Ans:  Atmosphere acts as a blanket of the earth because it maintains a fairly even temperature both during day and night. The atmosphere also shields the earth from the strong ultraviolet rays of the sun due to the presence of ozone gas. It also protects the earth from meteors. 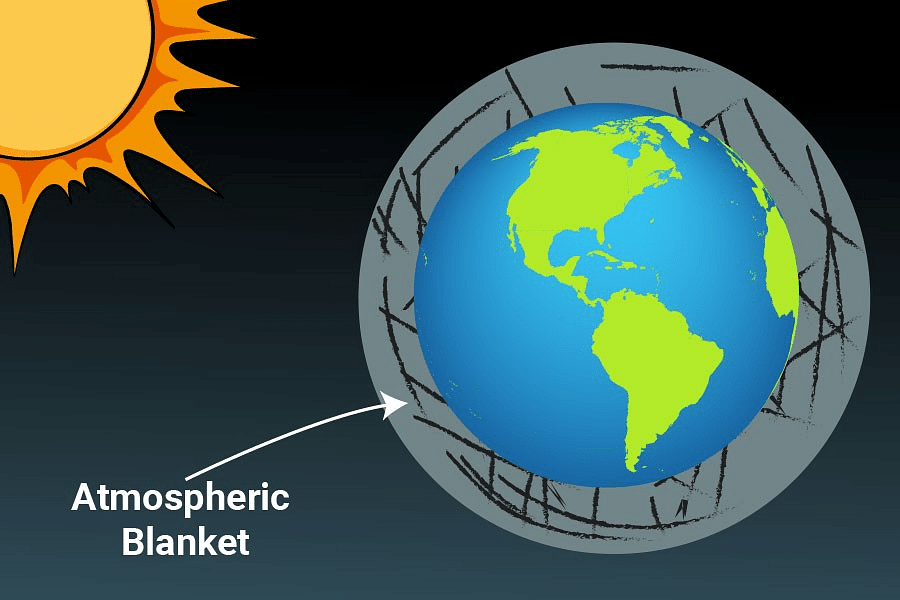 Q3: Mention the layers of the atmosphere. Name the closest layer to the earth's surface?

Ans:  The different layers of the atmosphere are:1. Troposphere2. Stratosphere3. Mesosphere4. Thermosphere5. ExosphereThe closest layer to the earth's surface is the Troposphere. 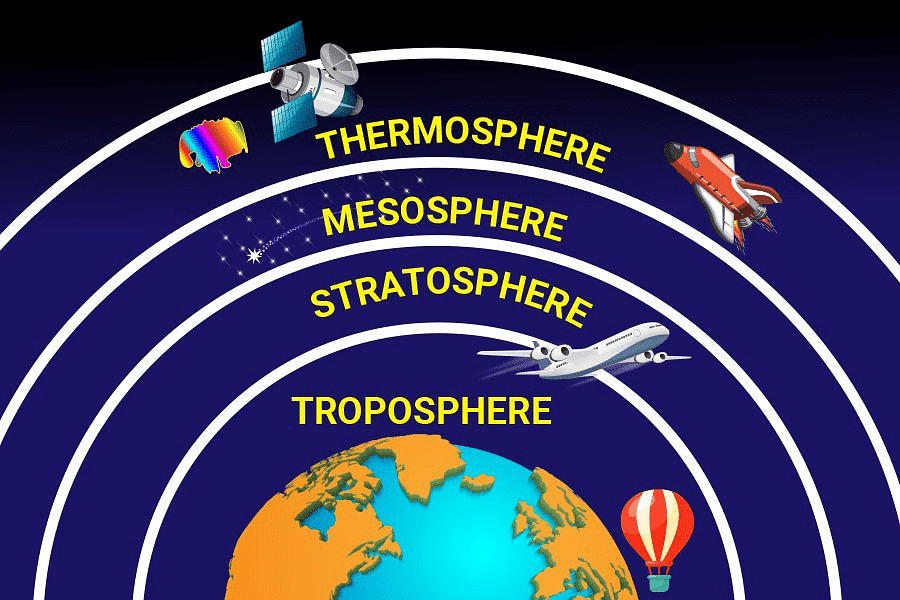 Q4: Name the major oceans on the earth.

Ans:  The major oceans on the earth are:Pacific Ocean, Atlantic Ocean, Indian Ocean, Arctic Ocean and the Southern Ocean. In 2000, the International Hydrographic Organization created the Southern Ocean extends from the coast of Antarctica north to 60 degrees south latitude with an area of approximately 20.3 million square kilometres.

Q5: What do you mean by Strait? Name the Strait between India and Sri Lanka.

Ans:  A strait is a narrow passage of water connecting two large water bodies like seas and oceans. The strait between India and Sri Lanka is Palk Strait.

Q6: What is a plateau? Name the two important plateaus of the world.

Ans:  A plateau is a large area of fairly level land rising much above the surrounding areas. A plateau may have steep slopes on one or more sides. The height of the plateau may range from 400 meters to several thousand meters above sea level. These are almost flat. Deccan Plateau of India and the plateau of Africa are two important examples.

Ans:  The climbers experience problems in breathing due to a decrease in the density of air. They have to carry with them oxygen cylinders to be able to breathe at higher altitude as the density of air keeps on decreasing with an increase in altitude.

Q8: What are mountains?

Ans:  A mountain is a conical mass of land rising to a much greater height than the surrounding areas. Its uppermost projected area is called the peak.

Q9: How do old and young mountains differ?

Q10: Name the major continents of the earth. Which is the largest continent?

The major continents of the earth are:

The largest continent is Asia. 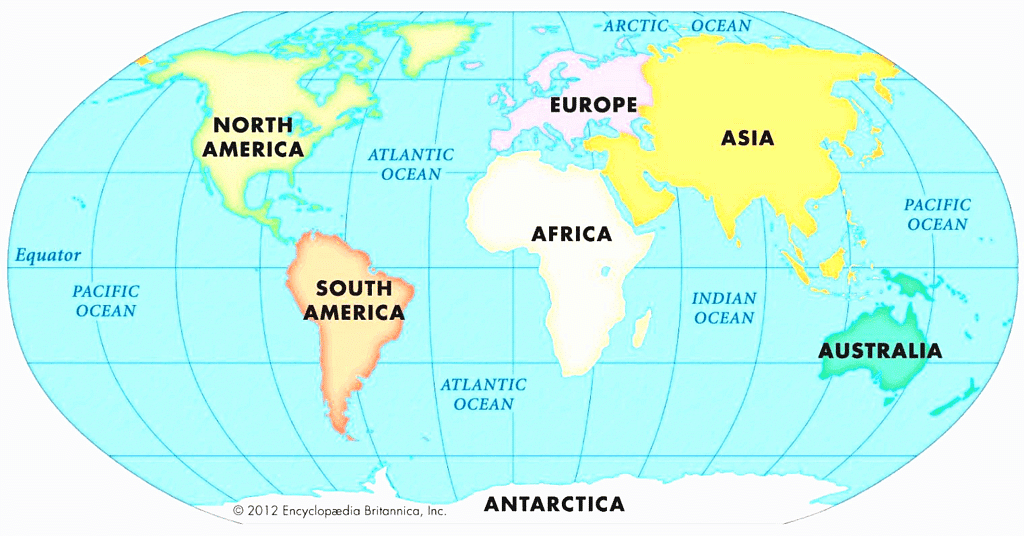 Continents and Ocean of the World

Q11: What are the important constituents of the atmosphere?

The major constituents of the atmosphere are:

The pure dry air is composed of five main gases:

Q12: What are the major effects of water pollution?

The major effects of water pollution are:

Q13: The three domains of the earth interact with each other and affect each other in some way. Discuss.

Ans:  The three domains of the earth interact with each other and affect each other. For example, industrial effluents are thrown on the land from where they gradually flow into rivers, lakes and other water bodies. Hence, polluting both land and water. The polluted release of smoke and other gases further pollute the atmosphere. So, all the major domains are affected by one common source.

Q14: Define global warming. State the factors responsible for it.

Global warming is the increased average temperature of the Earth's near-surface air and oceans.

Ans: Antarctica lies completely in the southern hemisphere. At the centre of the continent is the South Pole. It is permanently covered with thick ice sheets. There are no permanent human settlements here. Many countries have set up their research station here. Maitri and Dakshin Gangotri are Indian research centres.

Q16: Distinguish between stratosphere and troposphere.

Q17: Inspite of being called the Blue Planet, the earth experiences shortage of water. Why?

Ans:  The earth experiences water shortage because 97% of the earth’s water is found in the oceans and is too salty for human use. Of the remaining 3%, a large proportion is in the form of ice sheets, glaciers and under the ground. A very small percentage is available as freshwater.

Q18: What are the various uses of oceans?

Ans:  Ocean currents greatly affect the Earth's climate by transferring heat from the tropics to the Polar Regions, and transferring warm or cold air and precipitation to coastal regions, where winds may carry them inland. The oceans are essential for transportation: Most of the world's goods are exported or imported by ship between the different continents. Oceans are also the major supply source for the fishing industry Offshore Oil, Gas and Mining Recreation and Tourism: Including fishing, boating, swimming etc. Disposal of Waste from Land: Including sewage, non-point sources, CO2 sink.

Q19: How do we measure the elevation of land?

Ans: The level of seawater remains the same everywhere. The elevation of the land is measured from the level of the sea, which is taken as zero. 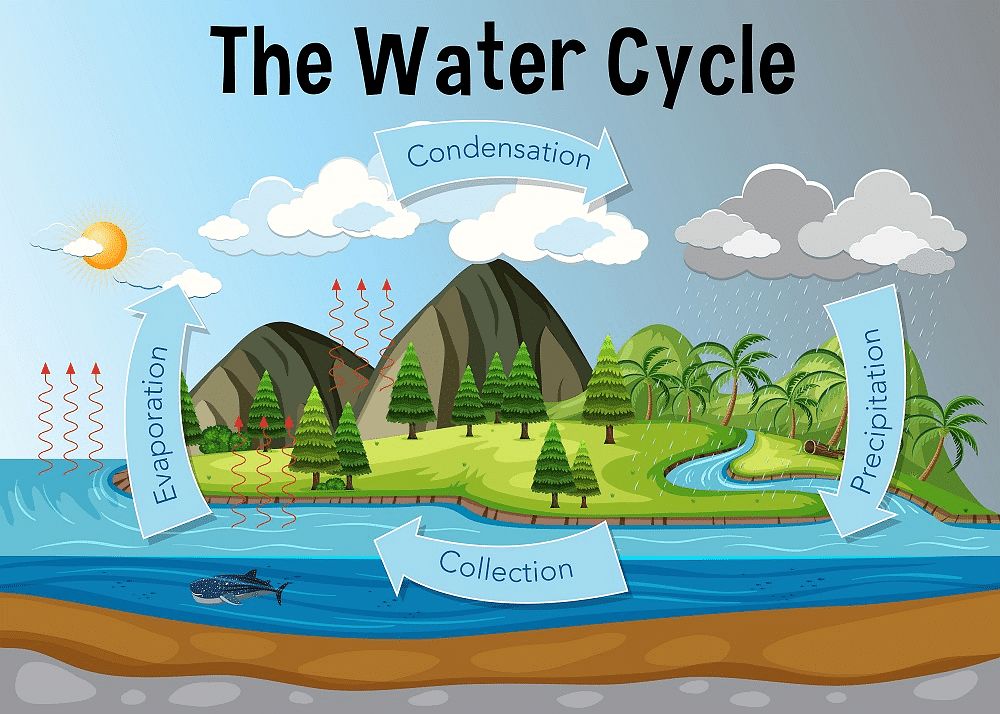 Ans: The continuous changes of the state and movement of water throughout the Earth system, i.e., the atmosphere, biosphere, lithosphere and hydrosphere is known as the water cycle. The water cycle is driven by energy from the Sun rays, which cause liquid water from Earth's surface to change into gas in a process called evaporation. As the gaseous vapour rises and circulates in the atmosphere, it cools and changes back into a liquid, a process known as condensation. When water vapour condenses, tiny droplets form clouds, which return the water to Earth as precipitation.

Q21: Write a note on the exosphere?

Ans:  The outermost layer of Earth's atmosphere extends upward. Here, the particles are so far apart, that they can travel hundreds of km without colliding with one another. Since the particles rarely collide, the atmosphere no longer behaves like a fluid. These free-moving particles follow ballistic trajectories and may migrate into and out of the magnetosphere or the solar wind. The exosphere is mainly composed of hydrogen and helium.

Ans:  Rainwater is naturally acidic due to carbon dioxide, which partially reacts with water to give carbonic acid. When we talk about acid rain, we mean the enhanced effect which is caused by other gases released when fossil fuels are burnt. Two main gases are: Sulphur dioxide and Nitrogen oxide. The dilute acid falls to the ground as acid rain.

Q23: What is ozone depletion?

Ans:  Ozone depletion occurs when the natural balance between the production and destruction of stratospheric ozone is tipped. Although natural phenomena can cause temporary ozone losses, man-made synthetic compounds such as CFCs are now accepted as the main cause of this depletion. Ozone depletion, in fact, is occurring all over the world due to man-made pollution, at 19 to 30 km above the Earth's surface. However, in certain parts of the world, ozone depletion is particularly severe.

Q1: Why is the Biosphere important for the living organism? Which meridian is taken as a standard meridian for India and why?

Ans:  Biosphere is the zone where life exists. This is the sphere where the other three spheres i.e. Lithosphere, Hydrosphere and atmosphere interact with each other. In this zone life, that is unique to this planet, exists. All living organisms including human beings are dependent on this sphere for survival.

Q2: How are human beings disturbing the balance of nature?

Ans:  Human beings have got certain needs and with these, they also have certain abilities; physical as well as mental. Thus in order to fulfil their needs, human beings are continuously using their abilities to modify nature. But with the advancement in technology, this modification of nature has taken the shape of degradation and exploitation of nature. There is thus, a need to limit the use of resources of the earth to maintain the balance of nature between the domains of the lithosphere, the atmosphere and the hydrosphere.