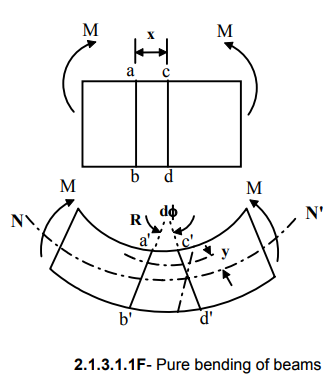 We consider that a plane section remains plane after bending- a basic assumption in pure bending theory.If the rotation of cd with respect to ab is dφ the contraction of a layer y distance away from the neutral axis is given by ds=y dφ and original length of the layer is x=R dφ, R being the radius of curvature of the beam. This gives the strain ε in the layer as

We also consider that the material obeys Hooke’s law σ = Eε. This is another basic assumption in pure bending theory and substituting the expression for ε we have

Consider now a small element dA y distance away from the neutral axis. This is shown in the figure 2.1.3.1.2

Axial force on the element d  dFσx= dA    and considering the linearity in stress variation across the section :

we have where σx and σmax are the stresses at distances y and d respectively from the neutral axis. The axial force on the element is thus given by

This means that the neutral axis passes through the centroid. Again for static equilibrium total moment about NA must the applied moment M. This is given by and this gives   σmax =

We therefore have the general equation for pure bending as

Shear stress in bending In an idealized situation of pure bending of beams, no shear stress occurs across the section. However, in most realistic conditions shear stresses do occur in beams under bending. This can be visualized if we consider the arguments depicted in figure-2.1.3.2.1 and 2.1.3.2.2.

2.1.3.2.1F- Bending of beams with a steady and varying moment along its length.

2.1.3.2.2F- Shear stress developed in a beam subjected to a moment varying along the length

When bending moment changes along the beam length, layer AC12 for example, would tend to slide against section 1243 and this is repeated in subsequent layers. This would cause interplanar shear forces F1 and F2 at the faces A1 and C2 and since the

force at any cross-section is given by , we may write

Here M and dM are the bending moment and its increment over the length dx and Q is the 1st moment of area about the neutral axis. Since shear stress across the layers can be given by

shear force is given by

A torque applied to a member causes shear stress. In order to establish a relation between the torque and shear stress developed in a circular member, the following assumptions are needed:

1. Material is homogeneous and isotropic2. A plane section perpendicular to the axis of the circular member remains plane even after twisting i.e. no warping.3. Materials obey Hooke’s law.

Consider now a circular member subjected to a torque T as shown in figure 2.1.4.1 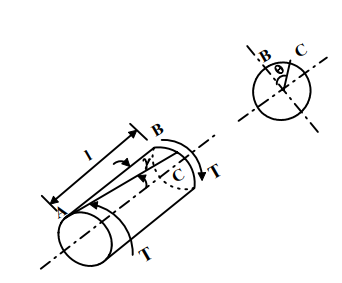 The assumption of plane section remaining plane assumes no warping in a circular member as shown in figure- 2.1.4.2 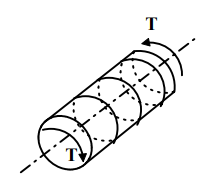 However, it has been observed experimentally that for non-circular members warping occurs and the assumption of plane sections remaining plane does not apply there. This is shown in figure-2.1.4.3. 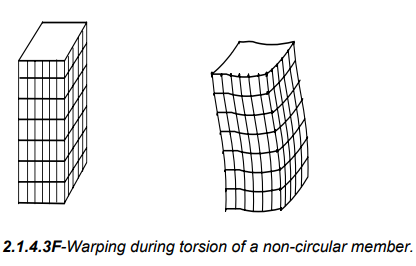 Let the point B on the circumference of the member move to point C during twisting and let the angle of twist be θ. We may also assume that strain γ varies linearly from the central axis. This gives

γ = rθ and from Hooke's law

where τ is the shear stress developed and G is the modulus of rigidity. This gives

Consider now, an element of area dA at a radius r as shown in figure-2.1.4.4. The torque on the element is given by 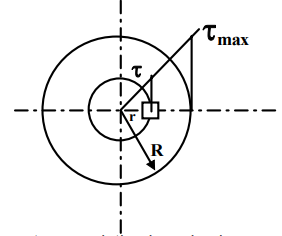 2.1.4.4F- Shear stress variation in a circular cross-section during torsion.

For linear variation of shear stress we have

Combining this with the torque equation we may write

Now ∫r2 dA may be identified as the polar moment of inertia J .

Therefore for any radius r we may write in general

We have thus the general torsion equation for circular shafts as

The compressive stress of P/A is applicable only to short members but for long compression members there may be buckling, which is due to elastic instability. The critical load for buckling of a column with different end fixing conditions is given by Euler’s formula ( figure-2.1.5.1) 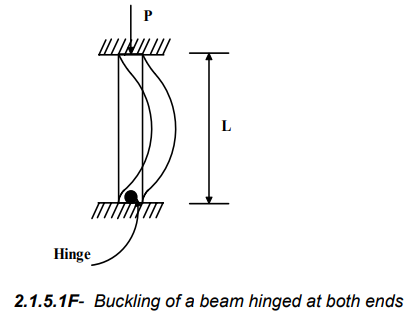