Stress at a point—its implication in design

The state of stress at a point is given by nine stress components as shown in figure 2.1.6.1 and this is represented by the general matrix as shown below. 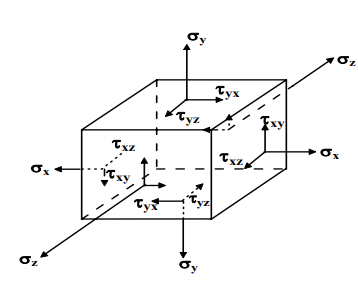 Consider now a two dimensional stress element subjected only to shear stresses. For equilibrium of a 2-D element we take moment of all the forces about point A ( figure-2.1.6.2) and equate to zero as follows: 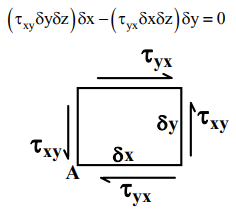 This gives τxy=τyx indicating that τxy and τyx are complimentary. On similar arguments we may write τyz=τzy and τzx=τxz . This means that the state of stress at a point can be given by six stress components only. It is important to understand the implication of this state of stress at a point in the design of machine elements where all or some of the stresses discussed above may act.

For an example, let us consider a cantilever beam of circular cross-section subjected to a vertical loading P at the free end and an axial loading F in addition to a torque T as shown in figure 2.1.6.3. Let the diameter of cross-section and the length of the beam be d and L respectively.

The maximum stresses developed in the beam are : 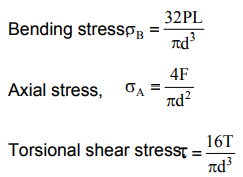 Principal stresses and maximum shear stresses can now be obtained and using a suitable failure theory a suitable diameter of the bar may be obtained.