Dynamic Vibration Absorbers (DVA) are based on the concept of attaching a secondary mass to a primary vibrating system such that the secondary mass dissipates the energy and thus reduce the amplitude of vibration of the primary system.

There are many application of DVA, A few are noted below:

DVAs are generally of three types

Here, a secondary mass is connected to the primary using a spring element.

Here the secondary mass is connected to the primary by a damper/dashpot.

A general case where both spring and damper are used to connect the secondary mass, with the primary system.

Model of a Simple Vibration Neutralizer 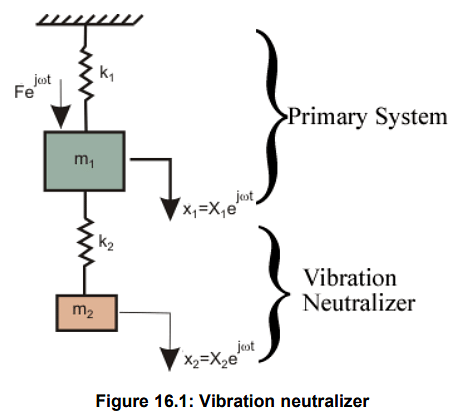 The responses of the masses from their respective equilibrium positions are denoted as x1 for m1 and x2 for m2 . The equations of motion for the masses can be written as

From eqns. (16.5) and (16.6), you may note that if the secondary system is tuned to the excitation frequency, i.e., its natural frequency

is made equal to , then

This implies that the primary system comes to rest, after tuning.