In most practical cases it is appropriate to obtain approximate values of A V , A i etc rather than calculating exact values. How the circuit can be modified without greatly reducing the accuracy. Fig. 4 shows the CE amplifier equivalent circuit in terms of h-parameters Since 1 / hoe in parallel with RL is approximately equal to RL if 1 / hoe >> RL then hoe may be neglected. Under these conditions,

Since hfe.hre = 0.01(approximately), this voltage may be neglected in comparison with hie Ib drop across hie provided RL is not very large. If load resistance RL is small than hoe and hre can be neglected.

Output impedance seems to be infinite. When Vs = 0, and an external voltage is applied at the output we find Ib = 0, I C = 0. True value depends upon RS and lies between 40 K and 80K.

On the same lines, the calculations for CC and CB can be done.

CE amplifier with an emitter resistor:

The voltage gain of a CE stage depends upon hfe. This transistor parameter depends upon temperature, ageing and the operating point. Moreover, hfe may vary widely from device to device, even for same type of transistor. To stabilize voltage gain AV of each stage, it should be independent of hfe. A simple and effective way is to connect an emitter resistor Re as shown in fig. 5. The resistor provides negative feedback and provide stabilization. 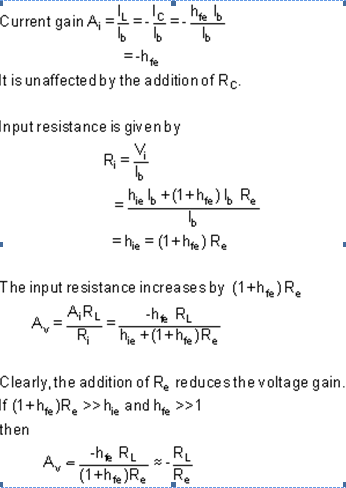 Subject to above approximation A V is completely stable. The output resistance is infinite for the approximate model

The characteristics of three configurations are summarized in Table. Here the quantities Ai, Av, Ri, Ro and AP are calculated for a typical transistor whose h-parameters are given in table .The values of RL and Rs are taken as 3KΩ.

The values of current gain, voltage gain, input impedance and output impedance calculated as a function of load and source impedances.

Characteristics of Common Base Amplifier

Applications: The CB amplifier is not commonly used for amplification purpose. It is used for

Applications: The CC amplifier is widely used as a buffer stage between a high impedance source and a low impedance load.