Q.1. Two small loud speakers A, B, 1.00 m apart are connected to the same oscillator so that both emit sound waves of a definite frequency in phase. A sensitive detector, moving parallel to AB along PQ, 2.40 m away (see Figure) detects a maximum wave at P on the perpendicular bisector MP of AB and another maximum wave when it first reaches a point Q directly opposite to B. The velocity of the sound waves is340 ms–1. The frequency of the oscillator is 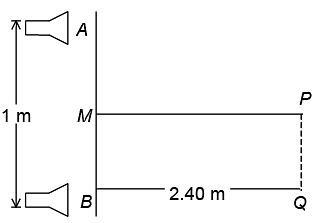 = 421 Hz(2)  Frequency heard by the driver (B) on the train: (The driver travels towards the source with the same speed as the source recedes from him.)

Q.4. A man on the platform is watching two trains, one leaving and the other entering the station with equal speed of 4 m/s. If they sound their whistles each of natural frequency 240 Hz, the number of beats heard by the man (velocity of sound in air = 320 m/s) will be(a) 6(b) 3

Apparent frequency of the leaving train is

Hence, the number of beats heard by the man per second

Q.6. A spring is loaded with two blocks m1 and m2 where m1 is rigidly fixed with the spring and m2 is just kept on the block m1 as shown in the figure.  The maximum energy of oscillation that is possible for the system having the block m2 in contact with m1 is

Correct Answer is option (c)Let the required amplitude be A.  For this amplitude of oscillation the normal contact force between the blocks can be given as m2 g – N = m2 a where a = ω2A⇒ m2g - N = m2ω2 APutting N = 0 for just losing contact for maximum amplitude,  we obtainA = g/ω2 where ω = angular frequency of oscillation of (m1 + m2) and the spring.Putting ω2= k/m1 + m2, we obtain

Q.7. The period of oscillation of a simple pendulum of length l suspended from the roof of a vehicle which moves without friction down an inclined plane of inclination α, is given by

Correct Answer is option (a)

= g cos α⇒ The period of oscillation of the pendulum

The pendulum will oscillate about the mean position that is given by the perpendicular position of the thread to the base of the vehicle.Hence (A) is correct.

Q.8. One end of a spring of force constant k is fixed to a vertical wall and the other to a block of mass m resting on a smooth horizontal surface.  There is another wall at a distance x0 from the block. The spring is then compressed by 2x0 and released. The time taken to strike the wall is

Q.9. A vibrating diaphragm sets up strong vibrations at the mouth of a horizontal tube containing air and a small amount of fine powder. If the powder becomes arranged in piles 1 cm apart, the wavelength of this sound in air is(a) 1/4cm(b) 1/2cm(c) 1 cm(d) 2 cm

Correct Answer is option (d)In figure, A, B are antinodes and N is node.Distance between piles A and B is

Q.10. One end of spring of spring constant k is attached to the centre of a disc of mass m and radius R and the other end of the spring connected to a rigid wall. A string is wrapped on the disc and the end A of the string (as shown in the figure) is pulled through a distance a and then released.

The disc is placed on a horizontal rough surface and there is no slipping at any contact point. What is the amplitude of the oscillation of the centre of the disc?(a) a(b) 2a(c) a/2(d) none of these.

Correct Answer is option (d)Time period of a physical pendulum:

Q.13. A uniform spring has a certain block suspended from it and its period for vertical oscillation is T1.  The spring is now cut into two parts of lengths 1/3rd and 2/3rd of original length and these springs are connected to the same block as shown in the figure.  If time period of oscillation now is T2 then T1/T2.(a)

Correct Answer is option (a) 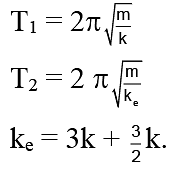 Q.14. A simple pendulum of length L and mass M is oscillating in a plane about a vertical line between angular limits -f and +f. For an angular displacement q(|q| <f) the tension in the string and velocity of the bob are T and v respectively.  The following relations hold good under the above condition.(a) T cosθ = Mg(b) T + Mg cosθ = Mv2/L(c) The magnitude of tangential acceleration of the bob | aT | = g sin θ(d) None of these

Q.15. A cylindrical piston of mass M slides smoothly inside a long cylinder closed at one end, enclosing a certain mass of a gas. The cylinder is kept with its axis horizontal. If the piston is slightly compressed isothermally from its equilibrium position, it oscillates simple harmonically, the period of oscillation will be

Q.16. An ideal spring having force constant k is suspended from the rigid support and a block of mass M is attached to its lower end. The mass is released from the natural length of the spring. Then the maximum extension in the spring is(a) 4Mg/k(b) 2Mg/k(c) Mg/k(d) Mg/2k

Q.17. A uniform spring has certain mass suspended from it and its period for vertical oscillation is T1.  The spring is now cut into two parts having the lengths in the ratio of 1 : 2 and same mass is suspended with those two spring as shown in figure.  Now time period is T2.  The ratio  T1 / T2 is(a) 1(b) sin θ(c) 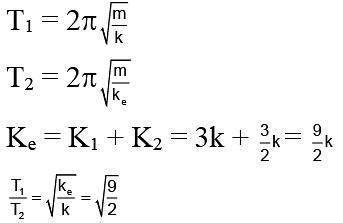 Q.18. A simple pendulum with length L and mass m of the bob is vibrating with an amplitude ‘a’.  The tension in the string at the lowest point is(A) mg(B)

Correct Answer is option (b)

Q.20. The angular velocity and the amplitude of simple pendulum is ‘ω' and ‘A' respectively. At a displacement 'x' from mean position, if the kinetic energy is T and potential energy is V. Then ratio T to V is(a) 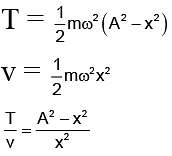