The document Single Output or Unit Costing - Overheads, Cost Accounting B Com Notes | EduRev is a part of the B Com Course Cost Accounting.
All you need of B Com at this link: B Com

Single/Output/Unit CostingUnit costing refers to the costing procedure, under which costs are accumulated and analyzed under different elements of cost and then cost per unit is ascertained by dividing the total cost by number of units produced. It is ideally used in case of concerns producing a single article on large scale by continuous manufacture. The units of output are identical. The products are homogenous. Concern using single or output costing produces basically one product or two or more grades of one product.It is not necessary to maintain separate cost accounts under this system. as all the information required can be obtained only by organizing and analyzing the financial accounts. On dividing the total expenditure incurred by the number of units produced, the cost per unit is ascertained.This system of costing is suitable for breweries, collieries, cement works, steel, brick making, floor mills etc. In all these cases the unit cost of the article produced requires to be ascertained.

The information on expenditure incurred on material, labour and direct expenses can be available without any special difficulty. The works and administration expenses actually incurred also are included in the total cost. Items of indirect expenses which are paid at periodical intervals are included in cost accounts on the basis of estimates. Selling and distributing expenses are not included in cost sheets since these have no connection with the quantity produced, If, however, it is decided to include them, the same also are estimated on the basis of past experience.

Cost SheetCost sheet is a document which provides for the assembly of the detailed cost of a cost centre or cost unit. It is a periodical statement of cost designed to show in detail the various components of cost of goods produced like prime cost, factory cost, cost of production, total cost and cost per unit. A specimen of a simple cost sheet is given below:

Cost Sheet (or Statement of Cost) for the period.No. of units produced..

If possible the cost sheet should have columns for (i) total cost; (ii) percentage to total cost; (iii) cost per unit; and (iv) corresponding figures of the pervious period and clear figures for each element of cost.

Treatment of stockStock requires special treatment while preparing a cost sheet. Stock may be of raw materials, work-inprogress and finished goods.

The following items are of financial nature and thus not included while preparing a cost sheet.

Example with SolutionIllustration 1:The accounts of Pleasant Company Ltd. show for 2012:Materials Rs 3,50,000; Labour Rs 2,70,000; Factory Overheads Rs 81,000 and Administration Overheads Rs 56,080.What price should the company quote for a refrigerator? It is estimated that Rs 1,000 in material and Rs 700 in labour will be required for one refrigerator. Absorb factory overheads on the basis of labour and administration overheads on the basis of works cost. A profit of 12½ % on selling price is required.Solution. Illustration 2:From the following data prepare a cost and profit statement of Popular Stoves Manufacturing Co. for the year 2011:

The number of stoves manufactured during the year 2011 was 4,000.The company wants to quote for a contract for the supply of 1,000 Electric Stoves during the year 2012. The Stoves to be quoted are of uniform quality and make and similar to those manufactured in the previous year ; but cost of materials has increased by 15% and cost of factory labour by 10%.Prepare a statement showing the price to be quoted to give the same percentage of net profit on turnover as was realised during the year 2011, assuming that the cost per unit of overheads will be the same as in the previous year.Solution. 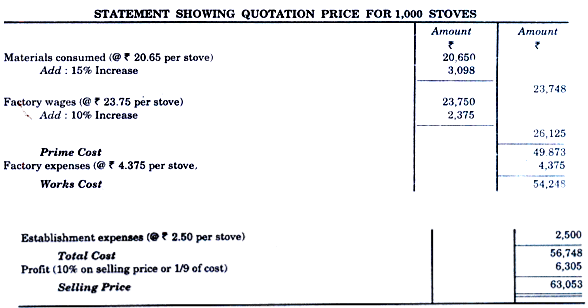 Illustration 3:Following are the particulars for the production of 2,000 sewing machines of Nath Engineering Co. Ltd., for the year 2011:Cost of Materials Rs. 1,60,000; Wages Rs. 2,40,000; Manufacturing Expenses Rs. 1,00,000; Salaries Rs. 1,20,000; Rent, Rates and Insurance Rs. 20,000; Selling Expenses Rs. 60,000; General Expenses Rs. 40,000 and Sales Rs. 8,00,000.The company plans to manufacture 3,000 sewing machines during 2012. You are required to submit a statement showing the price at which machines would be sold so as to show a profit of 10% on selling price.Following additional information is supplied to you:(a) Price of material is expected to rise by 20%(b) Wages rates are expected to show an increase of 5%.(c) Manufacturing expenses will rise in proportion to the combined cost of materials and wages(d) Selling expenses per unit will remain the same,(e) Other expenses will remain unaffected by the rise in output.Solution. Illustration 5:The Managing Director of a small manufacturing concern consults you as to the minimum price at which he can sell the output of one of the departments of the company which is intended for mass production in future. The company’s records show the following particulars for this department for the past year for production and sales of 100 units.Materials Rs. 14,000; Direct Labour Rs. 7,000; Works Overheads Rs. 7,000; Administration Overheads Rs. 2,800; Selling Overheads Rs. 3,200; Profit Rs. 6,000.You ascertain that 40% of the works overheads fluctuate directly with production and 70% of the selling overheads fluctuate with sales. It is anticipated that the department would produce 500 units per annum and that direct labour charges per unit will be reduced by 20%, while fixed works overheads will increase by Rs. 3,000. Administration overheads and fixed selling overheads are expected to show an increase of 25% but otherwise no changes are anticipated.Solution. Illustration 6:A factory’s normal capacity is 1,20,000 units per annum. The estimated costs of production are as under:Direct Materials Rs. 3 per unit; Direct Labour Rs. 2 per unit (subject to a minimum of Rs. 12,000 p.m.).Overheads—Fixed Rs. 1,60,000 per annum; variable Rs. 2 per unit; semi-variable Rs. 60,000 p.a. upto 50% capacity and an additional Rs. 20,000 for every 20% increase in capacity or part thereof. Each unit of raw material yields scrap which is sold at the rate of 20 paise. In 2012 the factory worked at 50% capacity for the first three months but it was expected that it would work @ 80% capacity for the remaining 9 months.During the first three months, the selling price per unit was f 12. What should be the price in the remaining nine months to produce a total profit of Rs. 2,18,000?Solution. 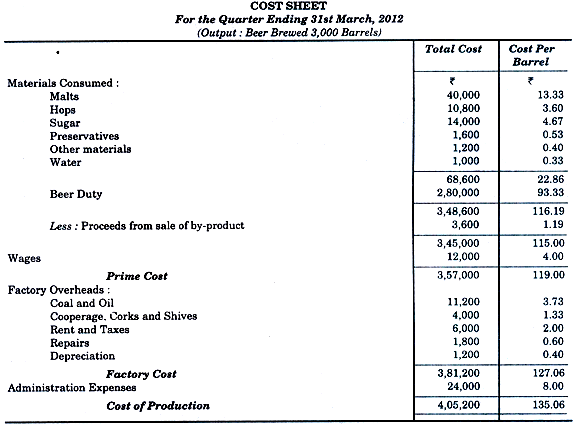 Illustration 8:Following figures are collected from the books of the Iron Foundry after the close of the year:

10% of the castings were rejected being not up to the specification and a sum of ₹ 400 was realised on sale as scrap. 10% of the finished castings were found to be defective in manufacture and were rectified by expenditure of additional works overhead charges to the extent of 20% on the proportionate direct wages. The total gross output of casting during the year was 1,000 tons. Find out the manufacturing cost of the saleable casting per ton.Solution. ∴ Manufacturing cost of the saleable casting per ton is

Illustration 9:A company presently sells an equipment for Rs. 35,000. Increase in prices of labour and material cost are anticipated to the extent of 15% and 10% respectively in the coming year. Material cost represents 40% of cost of sales and labour cost 30% of cost of sales. The remaining relates to overheads. If the existing selling price is retained, despite the increase in labour and material prices, the company would face a 20% decrease in the existing amount of profit on the equipment.You are required to arrive at a selling price so as to give the same percentage of profit on increased cost of sales, as before. Prepare a statement of profit/loss per unit, showing the new selling price and cost per unit in support of your answer.Solution.

Thus to obtain the same percentage of profit after the anticipated changes, the new selling price should be as follows :

Illustration 10:A company makes two district types of vehicles A and B. The total expenses during a period as shown by the books of assembly of 600 of A and 800 of B are as under:

Calculate the cost of each vehicle per unit giving reason for the basis c 'apportionment adopted by you.Solution.

Illustration 11:From the following particulars prepare a Production Account showing all details of cost and their break up and also calculate gross profit and net profit.