➤ RLC in SeriesCurrent in a series circuit containing resistance, inductive reactance, and capacitive reactance (figure a shown below) is determined by the total impedance of the combination. The current I is the same in R, XL, and XC since they are in series. The voltage drop across each element is found by Ohm’s law: VR = IR, VL = IXL , VC = IXC 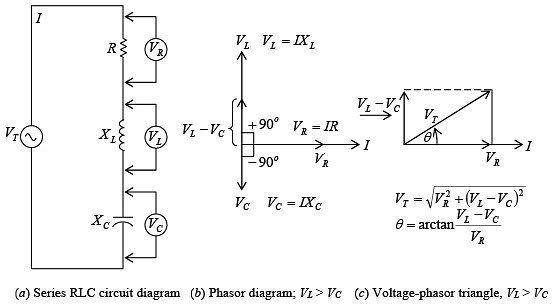 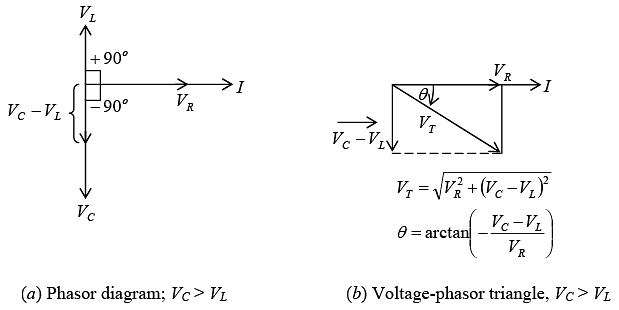 R, XL, and XC in series; XC > XL for capacitive circuitWhen XL > XC, the voltage-phasor diagram shows that the total voltage VT and phase angle are as follows:

➤ Impedance in Series RLCImpedance Z is equal to the phasor sum of R, XL, and XC. In figure a shown below:When

In figure b shown below:When

for both inductive and capacitive RLC series circuits.

➤ RLC in Parallel  A three- branch parallel ac circuit (figure a shown below) has resistance in one branch, inductance in the second branch, and capacitance in the third branch. The voltage is the same across each parallel branch, so VT = VR = VL = VC. The applied voltage VT is used as the reference line to measure phase angleθ . The total current IT is the phasor sum of IR, IL, and IC. The current in the resistance IR is in phase with the applied voltage VT (figure b shown below). The current in the inductance IL lags the voltage VT by 90°. The current in the capacitor IC leads the voltage VT by 90°. IL and IC are exactly 180° out of phase and thus acting in opposite directions. When IL >IC, IT lags VT (figure c shown below) so the parallel RLC circuit is considered inductive

R, XL, and XC in parallel; IL > IC for inductive circuit If IC > IL, the current relationship and phasor triangle (figure shown below) show that IT now leads VT so this type of parallel RLC circuit is considered capacitive.

R, XL, and XC in parallel; IC > IL for capacitive circuitWhen IL > IC  the circuit is inductive and

and when IC > IL, the circuit is capacitive and

➤ Impedance in Parallel RLC The total impedance ZT of a parallel RLC circuit equals the total voltage VT divided by the total current IT.

➤ RL and RC in ParallelTotal current IT for a circuit containing parallel branches of RL and RC (figure shown below) is the phasor sum of the branch currents I1 and I2. A convenient way to find IT is to(1) Add algebraically horizontal components of I1 and I2 with respect to the phasor reference VT,(2) Add algebraically the vertical components of I1 and I2, and  (3) Form a right triangle with these two sums as legs and calculate the value of the hypotenuse (IT) and its angle to the horizontal. 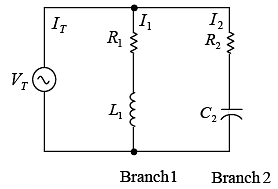 ➤ Power and Power FactorThe instantaneous power p is the product of the current i and the voltage v at that instant of time t.p = viWhen v and i are either positive or both negative, their product p is positive. Therefore, power is being expended throughout the cycle (figure a shown below). If v is negative while i is positive during any part of the cycle (figure b shown below), or if i is negative while v is positive, their product will be negative. This “negative power” is not available for work; it is power returned to the line. 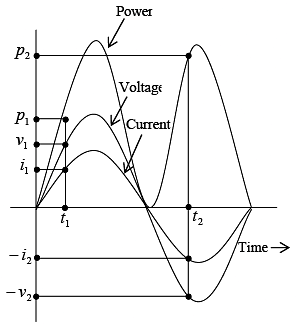 (a):  Power-time diagram when voltage and current are in phase 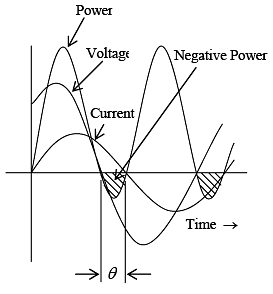 The product of the voltage across the resistance and the current through the resistance is always positive and is called real power. Real power can be considered as resistive power that is dissipated as heat. Since the voltage across a reactance is always 90° out phase with the current through the reactance, the product px = vxix is always negative. This product is called reactive power and is due to the reactance of a circuit. Similarly, the product of the line voltage and the line current is known as apparent power. Real power, reactive power, and apparent power can be represented by a right triangle (figure a shown below). From this triangle the power formulas are:Real power P= VR IR = VI cosθ, W 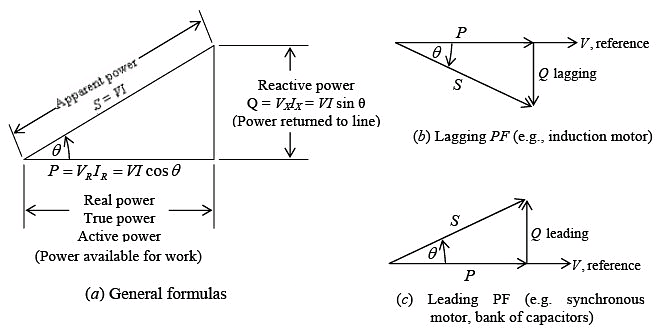 The cos θ of a circuit is the power factor, PF, of the circuit. The power factor determines what portion of apparent power is real power and can vary from 1 when the phase angle θ is 0°, to 0 when θ is 90°. Whenθ = 0° , P = VI, the formula for voltage and current of circuit in phase. Whenθ = 90° , P = VI × 0 = 0, indicating that no power is being expended or consumed.A circuit in which the current lags the voltage (i.e. an inductive circuit) is said to have a lagging PF; a circuit in which the current leads the voltage (i.e., a capacitive circuit) is said to have a leading PF.Power factor is expressed as a decimal or as a percentage. A power factor of 0.7 is the same as a power factor of 70 percent. At unity (PF = 1, or 100 percent), the current and voltage are in phase. A 70 percent PF means that the device uses only 70 percent of the voltampere input. It is desirable to design circuits that have a high PF since such circuits make the most efficient use of the current delivered to the load.When we state that a motor draws 10 kVA (1 kVA = 1000 VA) from a power line, we recognize that this is the apparent power taken by the motor. Kilovoltamperes always refers to the apparent power. Similarly, when we say a motor draws 10 kW, we mean that the real power taken by the motor is 10 kW.Power Factor CorrectionIn order to make the most efficient use of the current delivered to a load, we desire a high PF or a PF that approaches unity. A low PF is generally due to the large inductive loads, such as induction motors, which take a lagging current. In order to correct this low PF, it is necessary to bring the current as closely in phase with the voltage as possible. That is, the phase angle θ is made as small as possible. This is usually done by placing a capacitive load, which produces a leading current, in parallel with the inductive load.

We have observed that in many circuits’ inductors and capacitors are connected in series or in parallel. Such circuits are often referred to as RLC circuits. One of the most important characteristics of a RLC circuit is that it can be made to respond most effectively to a single given frequency. When operated in this condition, the circuit is said to be in resonance with or resonant to the operating frequency.A series or a parallel RLC circuit that is operated at resonance has certain properties that allow it to respond selectively to certain frequencies while rejecting others. A circuit operated to provide frequency selectivity is called a tuned circuit. Tuned circuits are used in impedance matching, bandpass filters, and oscillators.➤ Series ResonanceThe RLC series circuit (figure a shown below) has an impedance 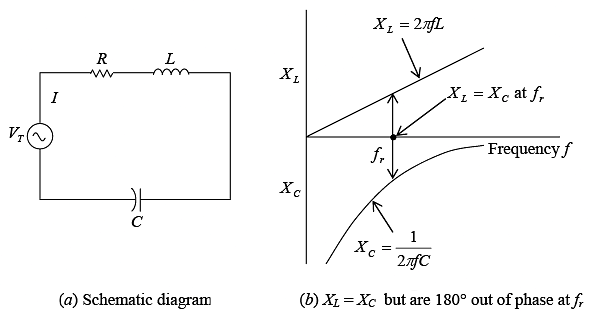 where fr = resonance frequency, Hz;  L = inductance, H; C = capacitance, F For any LC product [equation (1)] there is only one resonant frequency. Thus, various combinations of L and C may be used to achieve resonance if the LC product remains the same. Equation (1) may be solved for L or C to find the inductance or capacitance needed to from a series resonant circuit at a given frequency.

Since the impedance at resonance Z equals the resistance R, the impedance is a minimum. With minimum impedance, the circuit has maximum current determined by I = V/R. The resonant circuit has a phase angle equal to 0º so that the power factor is unity. 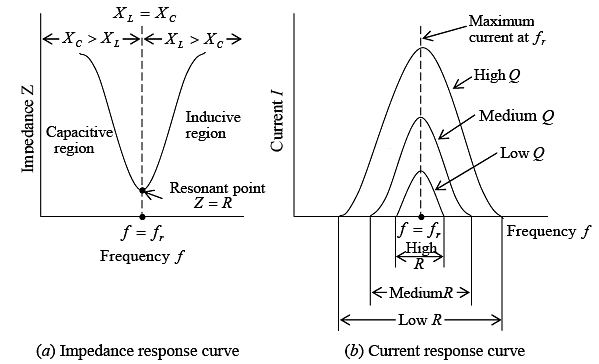 ➤ Q of Series CircuitThe degree to which a series-tuned circuit is selective is proportional to the ratio of its inductive reactance to its resistance. This ratio XL/R is known as the Q of the circuit and is expressed as follows: Q = XL/Rwhere Q = quality factor or figure of meritXL = inductive reactance, ΩR = resistance, Ω 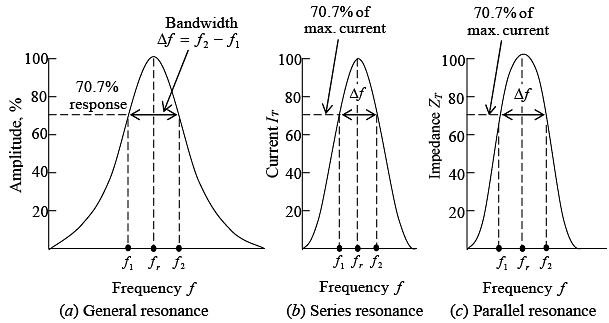 Bandwidth of a tuned LC circuitAt each frequency f1 and f2 the net capacitive or net inductive reactance equals the resistance. Then ZT of the series RLC resonant circuit is √2 or 1.4 times greater than R. The current then is I/√2 = 0.707 I. Since power is I2R or V2/R and (0.707)2 = 0.50, the bandwidth at 70.7 percent response in current or voltage is also the bandwidth of half power points.Bandwidth (BW) in terms of Q is

High Q means narrow bandwidth, whereas low Q yields greater bandwidth. Either f1 or f2 is separated from fr by one-half of the total bandwidth, so these edge frequencies can be calculated. 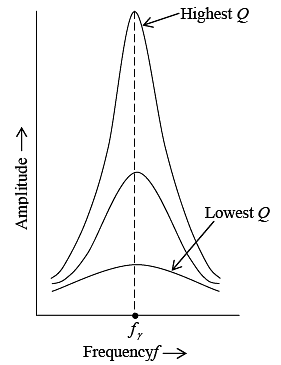 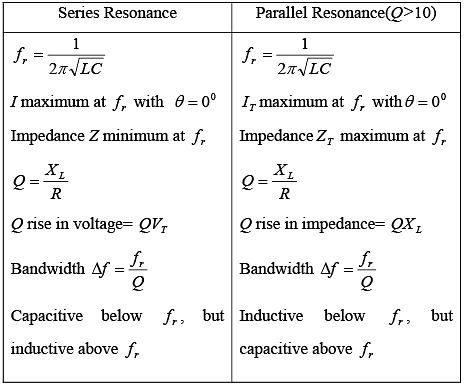