The document Small Oscillations - Lagrangian and Hamiltonian Equations, Classical Mechanics, CSIR-NET Physical Sc Physics Notes | EduRev is a part of the Physics Course Physics for IIT JAM, UGC - NET, CSIR NET.
All you need of Physics at this link: Physics

As an example of the use of the Lagrangian, we will examine the problem of small oscillations about a stable equilibrium point. The description of motion about a stable equilibrium is one of the most important problems in physics. This is true for both classical and quantum mechanics.Although there are other means of solving this problem, the Lagrangian method results in equations of motion that emphasizes symmetries of the system.

1.1 Formulation of the Problem

We assume that the forces acting on the system are conservative in which the potential depends only on the spatial coordinates; it is independent of the time and velocity. In addition, the transformations de¯ning the generalized coordinates are assume to not depend on the time explicitly. Hence, the constraints are time independent. For the system to be in equilibrium, the generalized force must be zero

The first term in the expansion is a constant, since the potential is only defined to a constant, we can ignore this term. The second term is zero, since we are expanding about the minimum. Therefore, the potential in this approximation is

where we assume that the displacements are small such that higher order terms are negligible.

The Vij in this equation are the equivalent spring constant for the one-dimensional problem. In addition, we note that the Vij are symmetric as can be seen from the definition.The kinetic energy, as shown earlier, can be written as the sum of three terms

Since we assume that the transformations are independent of time, only the Mij terms are nonzero; this is a natural system. In addition, since Mij in general is a function of the coordinates, we expand the Mij about the equilibrium point, since we are assuming small displacements about it

terms are symmetric.The Lagrangian for small oscillations about an equilibrium point is

where Tij describes the inertia of the system, and Vij the stiffiness1 . In Cartesian coordinates, and many other case, the kinetic energy term can be reduced to

the very familiar form of the kinetic energy. To calculate the equations of motion, we apply the Euler-Lagrange equations to the Lagrangian

Keep in mind that the Mij and Vij are independent of the coordinates and time, and they are symmetric.

The Eigenvalues and Eigenvectors

The solutions to the equations of motion are of the form

where C is an overall scale factor, ai the relative amplitude of the ith term, and the second equation comes from substituting the solutions into the equations of motion. Notice that this is a matrix equation, representing matrix multiplication between and nxn matrix and an n-dimensional column vector. This set of equations can be solved for the allowed values of ! by setting the determinant of the coefficients of ai equal to zero.

where we have written the equation explicitly in matrix form.Through the manipulations we have performed, we have arrived at an eigenvalue problem

where Va is shown to be a multiple of Ta. First we will show that the eigenvalues (λ) are real and positive, and the eigenvectors (a) are orthogonal. Start by taking the complex conjugate of Eq. 12

where we have used the fact that V and T are real and symmetric, and in addition, j corresponds to the jth eigenvalue and eigenvector. Next, multiply Eq. 13 by ai from the right

For the ith eigenvalue and eigenvector, multiply Eq. 12 from the left by

(15)Next, subtract the two equations

This states that the amplitudes are orthogonal to each other with respect to T.Let's now consider the case where i = j . First notice that

implies that the matrix product is real. Next, write

where we have written ai in terms of its real and imaginary components. Then, we get

Since the left hand side of this expression has already been shown to be real, the imaginary term is zero, thus

Starting with Eq. 7, we see that in matrix notation the kinetic energy is

must be positive (we already showed it was real), therefore

is real, we can write ai as

where N is an overall normalization factor, and φ is a real phase. The two factors can be absorbed into C of Eq. 10 making the ai real.Starting with the eigenvalue equation (Eq. 12) and multiplying from the left by

we can solve for the individual eigenvalues

The denominator is proportional to the kinetic energy, thus is must be positive. The numerator is the potential energy, which must be positive for a stable equilibrium. Therefore, λi must be positive and the frequencies are therefore real.To remove the arbitrary normalization and phase from ai, we require

Since we have an equation for each degree of freedom, we can combine this relation with

= 0 and write a matrix A whose columns are the individual ai . This leads to the relation

which is a congruence transformation that diagonalizes the matrix T. We take this further by noting that Eq. 12 can be written as

is a diagonal matrix composed of the eigenvalues. If we multiply from the left by AT , we diagonalize V

Therefore, the problem of small oscillation is reduced to solving the following matrix problem

That is, we must find a transformation that diagonalizes the matrix T. In this form, the Lagrangian is written as

Let's assume that two of the eigenvalues are equal

and apply the orthogonality relation

This procedure can be generalized for n repeated roots (eigenvalues).

Let's consider a triple pendulum as shown in Fig 1. We would like to determine the eigenfrequencies and eigenvectors (normal modes) of this oscillator for small oscillations.We start by writing the Lagrangian in rectangular coordinates

The kinetic and potential energies for m1 are

Next, we consider the kinetic and potential energies associated with m2 . The transformation equations are 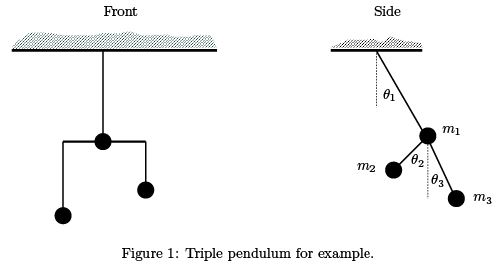 Applying the transformations to the m2 terms, the kinetic and potential energies are

The kinetic and potential energies associated with m3 are arrived at in a manner similar to m2 . These energies are

Combining the kinetic and potential energy terms together, the Lagrangian becomes

To determine the eigenvalues, we write the kinetic and potential energies in matrix form. The mass matrix for the kinetic energy is

and the stiffiness matrix is

Next, we solve the eigenvalue equation

and the eigenfrequencies are

Next, we calculate the motion of the normal modes. This is done by calculating the eigenvectors a for each eigenfrequency. We start with the the eigenfrequency

Finally, repeat for the remaining eigenfrequency and we get

What we have arrived at is the following description of the motion: The mode associated with the frequency

has the upper mass stationary and the lower masses oscillating with the same amplitude, but π radians out of phase. The frequency