The document Social Science Sample Paper - 6 Class 7 Notes | EduRev is a part of the Class 7 Course Social Studies (SST) Class 7.
All you need of Class 7 at this link: Class 7

Ques 1: Who had constructed Hauz-i Sultani?Ans: Sultan IltutmishQues 2: When is the International Women's Day observed?Ans: 8th MarchQues 3: In which continent is the Sahara desert located?Ans: The Sahara desert is located in Africa.Ques 4: When was the Civil Rights Act passed?Ans: 1964Ques 5: Who destroyed the temple of Sornnath?Ans: Sultan Mahmud of Ghazni, a ruler of Afghanistan, destroyed the temple of Somnath.Ques 6: Which gas creates greenhouse effect in the atmosphere?Ans: Carbon dioxide creates greenhouse effect in the atmosphere.Ques 7: What is 'Lost Wax' technique?Ans: (i) In this technique, first an image was made of wax which was covered with clay and allowed to dry.(ii) Then it was heated, and a tiny hole was made in the clay cover. The molten wax was drained out through this hole and molten metal was poured into the clay mould through the hole.(iii) When the metal cooled and solidified, the clay cover was removed and the image was cleaned and polished.Ques 8: In what ways is the Public Health System meant for everyone?Ans: Public health system is a chain of health centres and hospitals run by the government. It is opened for all whether the rich or poor, everybody is treated in the same way. The charges being taken in these centres are very low and affordable for the poor. Thus, we can say it is meant for everyone.Ques 9: How are sedimentary rocks formed?Ans: Rocks roll down, crack and hit each other and are broken down into small fragments. These smaller particles are called sediments. These sediments are transported and deposited by wind, water, etc. These loose sediments are compressed and hardened to form layers of rocks called sedimentary rocks.Ques 10: Match the following:

Ques 11: What are endogenic forces?Ans: The forces which act in the interior of the earth are called endogenic forces. They sometimes produce sudden movements and at the other times produce slow movements. Sudden movements like earthquake, volcanoes cause mass destruction. Slow movements like diastrophic forces help in building mountains.Ques 12: Give reasons:(a) The animals in polar region have thick fur and thick skin.(b) Tropical deciduous trees shed their leaves in the dry season.Ans: (a) The animals in polar region have thick fur and thick skin to protect themselves from the cold climatic conditions.(b) Tropical deciduous trees shed their leaves in the dry season to conserve water.Ques 13: How did people in the early days travel long distances? What changes came with the passage of time?Ans: In the early days, people had no means of transport. Whenever they had to go somewhere, they walked on foot. They used animals to carry their goods. Invention of the wheel, made transport easier. With the passage of time, different means of transport developed. Modern means of transport save time and energy.Ques 14: How did the Mansabdars receive their salaries?Ans: Mansabdars received their salaries as revenue assignments called jagirs.(i) They were just like iqtas.(ii) Most of the mansabdars did not actually reside in or administer their jagirs.(iii) They only had rights to the revenue of their assignments which was collected for them by their servants.(iv) Mansabdars themselves served in some other parts of the country.Ques 15: According to the "Circle of Justice" why was it important for military commanders to keep the interests of the peasantry in mind?Ans: Peasantry was the backbone of the entire kingdom. The king could not do anything without it because it was the source of revenue. The soldiers got their salaries from this revenue. Hence, it was necessary to keep the peasants happy and prosperous because only then they could be able to pay revenue. That?s why the military commanders kept the interests of the peasantry at the top.Ques 16: How has television brought the world closer?Ans: Television has enabled us to think of ourselves as members of a larger global world. Television images travel huge distances through satellites and cables. This allows us to view news and entertainment channels from other parts of the world. Most of the cartoons which we watch on TV are from Japan or the USA. We can now be sitting in any part of the country and can see the incidents taking place in any part of the world. Thus, television has brought the world closer.Ques 17: State 'True' or Take:(a) Nayanars worshipped Vishnu,(b) The Islam scholars developed a holy law called Shariat.(c) Saint Janeshwara rewrote the Gita in Marathi.(d) Vitthala is a form of Shiva.Ans: (a) False(b) True(c) True(d) FalseQues 18: Besides the Legislative Assembly, there are other places also where opinions are expressed about the work of the Government and action is demanded. Discuss.Ans: Besides Legislative Assembly there are other places (means) where opinions are expressed about the work of the government and action is demanded.(i) The newspapers, T.V. channels and other organisations regularly talk about the government.(ii) One such way is the Press Conference.(iii) Large numbers of people from different newspapers come to the Press Conference.(iv) The minister and some government officials explain the steps that the government has taken.(v) There are many questions asked by news reporters at this meeting. These discussions are then reported in different newspapers.(vi) In a democracy, there are various ways through which people express their views and also take action.

Ques 19: What is a tide? What are the benefits of high tides?
Ans: Rhythmic rise and fall of ocean water twice a day is called a tide. It is high tide when water covers much of the shore by rising to its highest level. High tides help in navigation as they raise the water level close to the shores. This helps the ships to arrive at the harbor more easily. The high tides also help in fishing. Many more fishes come closure to the shore during high tides. This enables fishermen to get a plentiful catch. The rise and fall of water due to tides is being used to generate electricity in some places.

Ques 20: What are the difficulties historian face in using manuscripts?
Ans: There were no printing press in early days so manuscripts were handwritten in those days. The scribes used to copy down those manuscripts and they used palm leaves for writing these manuscripts. They presented their version in their own way as many of the words and sentences were beyond their understanding. They also introduced small changes in manuscripts. These small changes grew over centuries of copying until manuscripts of the same text became substantially different from one another. Historians interpreted the facts as per manuscripts which they got. As a result, historians have to read different manuscript versions of the same text to guess the facts.

Ques 21: Describe the life of people of the rainforests.
Ans: (i) People grow most of their food in small areas after clearing some trees in the forest. Work is distributed among men and women. Men hunt and fish along the rivers and women take care of the crops.
(ii) They mainly grow tapioca, pineapple and sweet potato. Cash crops like coffee, maize and cocoa are also grown. They practise slash and burn agriculture.
(iii) As hunting and fishing are uncertain it is the women who keep their families alive by feeding them the vegetables they grow.
(iv) The staple food is manioc, also known as cassava that grows under the ground like the potato. They also eat queen ants and egg sacs.
(v) The rainforests provide a lot of wood for the houses. Some families live in thatched houses shaped like beehives. There are other large apartments-like houses called Maloca with a steeply slanting roof.

Ques 23: How were the Sikhs organised in the eighteenth century?
Ans: In the 18th century, under a number of able leaders, the Sikhs organised themselves into a number of bands called Jathas, and later on misls. Their combined forces were known as the grand army (Dal Khalsa). The entire body used to meet at Amritsar at the time of Baisakhi and Diwali to take collective decisions known as Resolution of the Guru (Gurumatas). A system called rakhi was introduced, offering protection to cultivators on the payment of a tax of 20 percent of the produce. Guru Gobind Singh had inspired the Khalsa with the belief that their destiny was to rule (Raj Karega Khalsa.) Their well-knit organisation enabled them to put a successful resistance to the Mughal governors first and then to Ahmad Shah Abdali who has seized the rich province of Punjab and the Sarkar of Sirhind from the Mughals. The Khalsa declared their sovereign rule by striking their own coin again in 1765.

Ques 24: What is the role of media in a democracy?
Ans: Media plays a very significant role in a democracy. It provides news and discusses events related to the country or world.
(i) It helps the citizens to know about the working of the government, and if required, brings forth the the problems.
(ii) Media helps the people of around the world to known and understand about what is going on in other parts of the world.
(iii) Media helps by setting the agenda and helps people to organize protests
(vi) Media propagates the policies and programmes of the government and criticizes the unpopular policies.
(v) It reports crimes, mishappenings etc.

Ques 25: On the physical map of the subcontinent, identify the areas in which the following tribal people may have lived. Kolis, Gonds, Mundas, Bhils, Khasis
Ans: 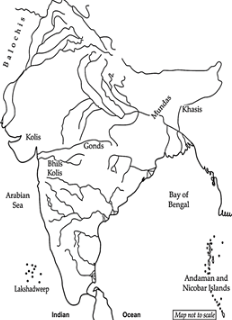