The document Social Science Sample Paper - 7 Class 7 Notes | EduRev is a part of the Class 7 Course Sample Papers For Class 7.
All you need of Class 7 at this link: Class 7

Ques 1: What is the Tropical Grassland of Africa called?Ans: Savannah.Ques 2: Who were Devadasis?Ans: Devadasis were the temple dancers who performed in front of the deity, royalty and masses in the pillared hall of Virupaksha temple.Ques 3: Across which river is Tehri dam built?Ans: NarmadaQues 4: What do you mean by 'Primogeniture'?Ans: Primogeniture is a system in which the eldest son inherited his father's estate.Ques 5: What is a 'Ranch'?Ans: A large farm in North America, where cattle or other animals are bred is called a ranch.Ques 6: When is World Environment Day observed?Ans: 5 JuneQues 7: When was Humayun's tomb built? What are its special features?Ans: Humayun's main tomb was built in between 1562 and 1571.Its main features are:(i) The central towering tomb and the tall gateway was known as pishtaq became first visible in Humayun's tomb and there after became important aspect of Mughal architecture.(ii) The tomb was placed in the centre of a huge formal chahar bagh and built in tradition known as 'eight paradises' or hasht Bihisht?a central hall surrounded by eight rooms.Ques 8: What are the responsibilities of ruling party?Ans: (i) The ruling party has the responsibility of running the various departments like health, education, agriculture, etc.(ii) They have to answer the questions asked in the legislature.(iii) They have to make new laws and implement the ones already existing.Ques 9: What is a tide? Explain its types.Ans: Rhythmic rise and fall of ocean water twice a day is called a tide. There are two types of tides: High tides: It is high tide when water covers much of the shore by rising to its highest level. Low tides: It is low tide when water falls to its lowest level and recedes from the shore.Ques 10: Match the following:

Ques 11: Write a brief note on Civil Right Act of 1964.Ans: The Civil Right Act was passed in 1964. The act prohibited discrimination on the basis of race, religion or national origin. It also stated that African- American children would no longer have to attend separate schools, specially set up for them. In fact, all the schools would be open for them. However, a majority of African-American continue to be among the poorest in the country.Ques 12: Give some merits and demerits of roadways as a means of transport.Ans: Merits:Roadways are the most commonly used means of transport for short distances. Roadways have also been built in terrains like deserts, forests, high mountains, etc.Demerits:(i) We cannot send goods in bulk at a time like those in railways.(ii) High maintenance of roads is required especially after rainy seasons and it is not as comfortable as railways or airways.Ques 13: What happens in the second course of the river?Ans: As the river enters the plain, its speed reduces, this is called the second course of river. The twist and turns form bends called meanders. Continuous erosion and deposition by the side of meanders form closer loops. These get cut from the river and form cut-off lake called ox-bow lake. Deposition of fine soil and other sediments by the river bank led to formation of fertile flood plains. The raised banks are called levees.Ques 14: Why are things cheap in weekly market?Ans: Things are cheap in weekly markets because the shops are not permanent there. Traders set their shops in the morning and close them up in the evening. Thus, they do not have to bear the shop establishment cost. Most of them are helped by their family members and hence do not need to hire workers. Their shops are usually small and family members are enough to run them.Ques 15: Describe the life of nomads in brief.Ans: (i) Nomadic pastoralists moved over long distances along with their animals.(ii) They lived on milk and other pastoral products.(iii) They also exchanged wool, ghee, etc. with settled agriculturists, for grain, cloth, utensils and other products.(iv) They bought and sold these goods as they moved from one place to another. They carried them on the back of their animals.

Ques 16: Give a brief account of Raziyya.
Ans: Sultan Iltutmish's daughter, Raziyya, became the Sultan in 1236. The chronicler of the age named Minhaj-i Siraj said that she was more able and qualified than all her brothers. Her brothers were not comfortable having her as ruler. The nobles were also not happy at her attempts to rule independently. She was removed from the throne in 1240.

Ques 17: Explain the problem of dearth of original manuscripts.
Ans: We can rarely find original manuscripts of the authors. This is a severe problem today.
(i) We are entirely dependent on the copies made by later scribes.
(ii) As a consequence, the historians have to go through different manuscripts (versions) of the same text to identify what the author had originally written.
(iii) At times various authors revised their chronicles.
(iv) For example, Z. Barani wrote his first chronicle book in 1356 and another version came two years later. The two versions differed from one another and the historians did not even know about the existence of the first version till 1960s as it had remained lost in massive library collections.

Ques 18: Fill in the blanks:
(a) ____ are small rivers that join the main river.
(b) ____is a way of cultivating land where farmers clear a piece of land by slashing or cutting down trees and bushes.
(c) The one-horned rhinoceros is found in the
(d) Imambara is located in ____.
Ans: (a) Tributaries
(b) Slash and Burn
(c) Brahmaputra plain
(d) Lucknow

Ques 19: Explain - Tripartite Struggle?
Ans: All the ruling dynasties were based in a specific region. At the same time, they tried to control the other areas. One particularly prized area was the city of Kanauj in the Ganga valley. For centuries, rulers belonging to the Gurjara-Pratihara, Rashtrakuta and Pala dynasties fought for control over Kanauj. As there were three 'parties' in this long drawn conflict, historians often describe it as the "tripartite struggle". Rulers also tried to demonstrate their power and resources by building large temples. When they attacked one another's kingdom, they often chose to target temples, which were sometimes extremely rich.

Ques 21: (ii) The depositional feature of a glacier is:
(A) Flood plain
(B) Beach
(C) Moraine
Ans: Moraine

Ques 22: (iii) Which is caused by the sudden movements of the earth?
(A) Volcano
(B) Folding
(C) Flood plain
Ans: Volcano

Ques 24: Can you explain two ways in which you think advertising affects issues of equality in a democracy?
Ans: Branded products cost much more than those sold loose. It is because they include the cost of packaging and advertising. It is very difficult, almost impossible, for the large majority of people to buy such costly products. Only a small group of high class people, say wealthy people can afford to buy them. Here, the principle of equality is ignored. Advertising a product is a costly affair. Only large companies get their products advertised. So far small businessmen are concerned, they find it difficult to advertise their products because the income is small. They often have to sell their products in weekly market or neighbourhood shops. Here also, principle of equality is marred.

Ques 25: What were the major teachings of Baba Guru Nanak?
Ans: The major teachings of Baba Guru Nanak were as under:
(i) He emphasised the importance of the worship of one God.
(ii) He insisted that caste, creed or gender were irrelevant for attaining liberation.
(iii) His idea of liberation was not that of a state of inert bliss but the pursuit of active life with a strong sense of social commitment.
(iv) He himself used the terms nam, elan and insan-for the essence of his teachings which actually meant right worship, welfare of purity of conduct.
(v) He directed to the importance of right belief and worship, honest living and helping others.

Ques 26: How is an advertisement for a product made?
Ans: Advertising is a very important part of getting people to buy a brand, therefore the advertisement should be such that it gets people attracted towards the product. The process of making advertisement has following steps:
(i) First of all, profiling of the consumers is done by considering who will buy the product and so the campaigning will be according to that.
(ii) For doing this, research specific companies are hired.
(iii) After the result, the brand identity that suits or appeals to the selected category is created.
(iv) An angle which is different from all the other advertisements of the same product is chosen. Then a tag line and the brand name is selected and a presentation to the client is made.
(v) The visuals are tested amongst a targeted audience. Then the campaign is finalized and released.

Ques 27: What are the expectations concerning the roles of women and men in our society?
Ans: Societies make clear distinctions between boys and girls. This begins from a very young age.
(i) We are given different toys to play with. Boys are usually given cars to play with and girls are given dolls.
(ii) Toys become a way of telling children that they will have different futures when they become men and women.
(iii) This difference is created in the smallest and everyday things. Girls need to talk softly and boys need to be tough.
(iv) All these are ways of telling children that they have specific roles to play when they grow up to be men and women.
(v) Later in life this affects the subjects we can study or the careers we can choose.

Ques 28: On an outline map of North America, mark the Rocky mountains, the Great Lakes, river Mississippi, the cities-Chicago and Winnipeg,
Ans: 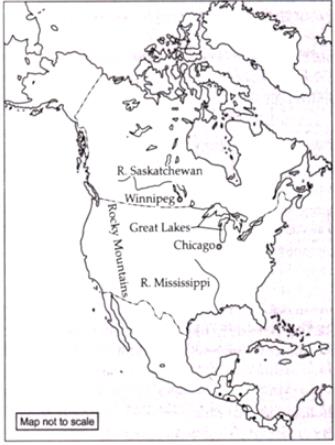