It is necessary to adopt a formal system of soil description and classification in order to describe the various materials found in ground investigation. Such a system must be meaningful and concise in an engineering context, so that engineers will be able to understand and interpret.

It is important to distinguish between description and classification:

Description of soil is a statement that describes the physical nature and state of the soil. It can be a description of a sample, or a soil in situ. It is arrived at by using visual examination, simple tests, observation of site conditions, geological history, etc.

Classification of soil is the separation of soil into classes or groups each having similar characteristics and potentially similar behaviour. A classification for engineering purposes should be based mainly on mechanical properties: permeability, stiffness, strength. The class to which a soil belongs can be used in its description.

The aim of a classification system is to establish a set of conditions which will allow useful comparisons to be made between different soils. The system must be simple. The relevant criteria for classifying soils are the size distribution of particles and the plasticity of the soil.

The grain-size range is used as the basis for grouping soil particles into boulder, cobble, gravel, sand, silt or clay.

For measuring the distribution of particle sizes in a soil sample, it is necessary to conduct different particle-size tests.

The results are then plotted between % finer (passing) and log size. 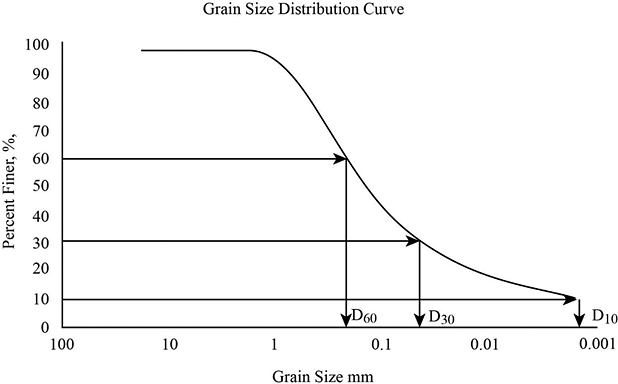 From the complete grain-size distribution curve, useful information can be obtained such as:

1. Grading characteristics, which indicate the uniformity and range in grain-size distribution.2. Percentages (or fractions) of gravel, sand, silt, and clay size.