Compaction is the application of mechanical energy to soil so as to rearrange its particles and reduce the void ratio.It is applied to improve the properties of existing soil or in the process of placing fill such as in the construction of embankments, road bases, runways, earth dams, and reinforced earth walls. Compaction is also used to prepare a level surface during construction of buildings. There is usually no change in the water content and in the size of the individual soil particles.The objectives of compaction are:

The variation in compaction with water content and compactive effort is first determined in the laboratory. There are several tests with standard procedures such as: 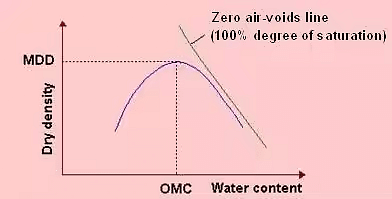 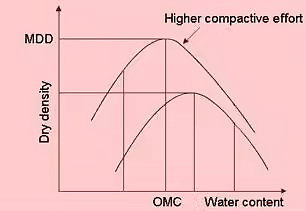 The factors that influence the achieved degree of compaction in the laboratory are:

Compaction of Cohesionless SoilsFor cohesionless soils (or soils without any fines), the standard compaction tests are difficult to perform. For compaction, application of vibrations is the most effective method. Watering is another method. To achieve maximum dry density, they can be compacted either in a dry state or in a saturated state.

On the basis of relative density, sands and gravels can be grouped into different categories:

It is not possible to determine the dry density from the value of the relative density. The reason is that the values of the maximum and minimum dry densities (or void ratios) depend on the gradation and angularity of the soil grains.

Some extra details about compaction 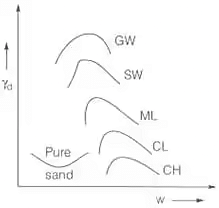