Next, we assume that the bar has a rectangular cross section of width 2b and depth 2h, as shown in ﬁgure 9.15. For this section the boundary is deﬁned by the function,

It can be veriﬁed that choosing the Prandtl stress function, φ as Cf(x,y) would not satisfy the governing equation (9.47). Hence, we assume a stress function of the form,

Thus, we need to solve the diﬀerential equation (9.74) subject to the boundary condition (9.75).

Towards this, we seek solution of the form

(9.77)where k is any constant. Recognize that the left hand side of the equation is a function of x alone and the right hand side is a function of y alone. Hence, for these functions to be same, they have to be a constant. Solving the second order ordinary diﬀerential equations (9.77) we obtain,

where n is any integer. Since, the governing equation for V , (9.74) is a Laplace equation, it is a linear equation. Consequently, if two functions satisfy the given equation (9.74) then a linear combination of these functions also satisﬁes the Laplace equation. So the solution (9.80) can be written as,

Now, we have to ﬁnd the constants En such that for −b ≤ x ≤ b, a linear combination of cosines approximates the quadratic function on the right hand side of equation (9.83). Using the standard techniques in fourier analysis we obtain,

ntegrating the above equation and rearranging, we obtain

Having found the stress function, we are now in a position to ﬁnd the shear stresses and the warping function. First, we compute the stresses as, 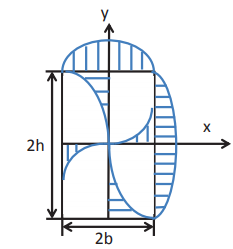 where we have assumed that h ≥ b.Substituting (9.87) in equation (9.45) and solving the first order ordinary

Figure 9.17: Warping deformation of a rectangular section due to end torsion

Figure 9.17 plots the warped rectangular section. Substituting (9.87) and (9.88) in equation (9.57) we can relate the applied torque, T to the realized angle of twist per unit length, Ω as

This relation is expressed as

where C1 is a non-dimensional parameter which depends on h/b. In the same spirit, the maximum shear stress, (9.89) could be related to the applied

Table 9.1: Tabulation of parameters C1 and C2 as a function of h=b

where C2 is another non-dimensional parameter which depends on h/b. Values of C1 and C2 for various h/b ratios are tabulated in table 9.1. Thus, for thin rectangular sections, when h/b tends to ∞,