The document Solution of Control and Coordination (Page No - 94)- Biology by Lakhmir Singh, Class 10 Class 10 Notes | EduRev is a part of the Class 10 Course Class 10 Biology Solutions By Lakhmir Singh & Manjit Kaur.
All you need of Class 10 at this link: Class 10 (a) Which figure shows the correct position taken by the parts A and B of the plant ?
(b) What type of phenomenon is exhibited by the figure chosen in (a) above ?
Solution :
(a) Figure
(ii)
(b) Geotropism.

Question 29:
Name the plant hormones which are responsible for the following effects :
(a) falling of leaves
(b) opening of stomata
(c) bending of stem towards light (d) closing of stomata
Solution :
(a) Abscisic Acid
(b) Cytokinin
(c) Auxin
(d) Abscisic Acid 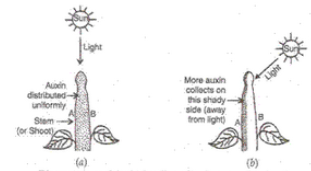 Question 36:
(a) How does control and coordination take place in plants ? How does it differ from that in animals ?
(b) Name five stimuli which act on plants. Name the type of tropism produced by each one of these stimuli.
(c) Define hydrotropism. Give one example of hydrotropism. State whether this example is of positive hydrotropism or negative hydrotropism. Illustrate your answer with the help of labelled diagram.
Solution :
(a) The plants do not have a nervous system but they can sense things in the presence of stimuli such as light, touch, water etc. and respond to them by the action of hormones. Thus, the plants coordinate their behavior against environmental behavior by using organic chemicals called hormones. This is called chemical coordination. The hormones in plants coordinate their behavior by affecting the growth of a part of the plant resulting in the movement of that plant part in response to a stimulus. The control and coordination in animals takes place by both nervous system and hormones.
(b)
(i) Light – Phototropism.
(ii) Gravity – Geotropism.
(iii) Chemical – Chemotropism.
(iv) Water – Hydrotropism.
(v) Touch – Thigmotropism.
(c) The movement of a plant part in response to water is called hydrotropism. Example: The roots of a plant always go towards water, this is positive hydrotropism.