The document Solution of Gravitation (Page No - 123) - Physics by Lakhmir Singh, Class 9 Class 9 Notes | EduRev is a part of the Class 9 Course Class 9 Physics Solutions By Lakhmir Singh & Manjit Kaur.
All you need of Class 9 at this link: Class 9

Question 4:Name the quantity whose one of the units is pascal (Pa).Solution :Pressure has unit of Pascal (Pa).

Question 6:State whether the following statements are true or false :(a) The buoyant force depends on the nature of object immersed in the liquid(b) Archimedes’ principle can also be applied to gases.Solution :(a) False(b) True

Question 10:What is upthrust ?Solution :The upward force acting on an object immersed in a liquid is called upthrust.

Question 11:Name the principle which gives the magnitude of buoyant force acting on an object immersed in a liquid.Solution :Archimedes’ Principle.

Question 14:What is the ss ientific name of the ‘upward force’ acting on an object immersed in a liquid ?Solution :Buoyant force or upthrust.

Question 15:What is meant by the term ‘buoyancy’ ?Solution :The tendency of a liquid to exert an upward force on an object placed in it, is called buoyancy.

Question 16:What causes buoyant force (or upthrust) on a boat ?Solution :The buoyant force on a boat is caused by the pressure of water ‘pushing up’ on the bottom of the boat.

Question 17:Why does ice float in water ?Solution :The density of ice is less than that of water, so ice floats in water.

SI unit of density is kg/m3

The relative density of a substance is the ration of its density to that of water.

It has no unit.

Question 28:Define thrust. What is its unit ?Solution :The force acting on a body perpendicular to its surface is called thrust. The SI unit of thrust is newton (N).

Question 31:Why do we feel light on our feet when standing in a swimming pool with water up to our armpits ?Solution :As more and more volume of our body is immersed in water, the apparent weight of the body goes on decreasing and the body seems to become lighter. This is due to the increase in upward buoyant force acting on the body.

Question 32:Explain why, big boulders can be moved easily by flood.Solution :Big boulders weig much less while in water and as such are easily moved by the flood.

Question 36:Explain why, school bags are provided with wide straps to carry them.Solution :School bags have wide straps so that their weight may spread over a large area of shoulder producing less pressure on the shoulder.

Question 37:Why does a sharp knife cut objects more effectively than a blunt knife ?Solution :A sharp knife cuts objects easily because due to its very thin edge, the force of our hand falls on a very small area of the object producing large pressure.

Question 39:Explain why, a wide steel belt is provided over the wheels of an army tank. The density of iron or steel is much higher than that of water, so an object made of iron or steel (like this car) sinks in water.Solution :A wide steel belt is provided over the wheels of an army tank so that they exert less pressure on the ground and do not sink into it.

Question 40:Explain why, the tip of a sewing needle is sharp. 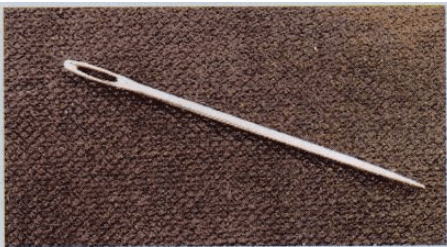 Solution :The tip of the sewing needle is sharp so that due to its sharp tip, the needle may put the force on a very small area of the cloth, producing a large pressure sufficient to pierce the cloth being stitched.

Question 44:Use your ideas about pressure to explain why it is easier to walk on soft sand if you have flat shoes rather than shoes with sharp heels.Solution :Flat shoes have greater area in contact with the soft sand as compared to heels. Due to this, there is less pressure on soft sand because of which they do not sink much in the sand and it is easy to walk on it.

Question 45:Explain why, a nail has a pointed tip. 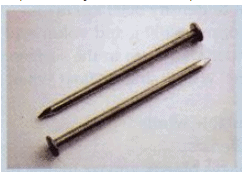 A nail has a pointed tip

Solution :A nail has a pointed tip, so that when it is hammered, the force of hammer is transferred to a very small area of wood creating a large pressure which pushes the nail into the wood.