The document Solution of Life Processes (Page No - 26 (Part - 2))- Biology by Lakhmir Singh, Class 10 Class 10 Notes | EduRev is a part of the Class 10 Course Class 10 Biology Solutions By Lakhmir Singh & Manjit Kaur.
All you need of Class 10 at this link: Class 10

(c) The five steps involved in the process of nutrition in animals are
(i) Ingestion
(ii) Digestion
(iii) Absorption
(iv) Assimilation
(v) Egestion.

Question 67:
(a) Describe the process of nutrition in Draw labelled diagrams to show the various steps in the nutrition in Amoeba.
(b) What is the mode of nutrition in Amoeba known as ?
(c) What is the process of obtaining food by Amoeba called ? What does it mean ?
Solution :
(a) Nutrition in amoeba: Nutrition in amoeba involves the following steps
(i) Ingestion ? Amoeba has no mouth for ingestion of food. It ingests the food by using its pseudopodia. The food is engulfed with little water to form a food vacuole.
(ii) Digestion ? The food is digested by digestive enzymes present in the cytoplasm which breaks the food into small soluble molecules by chemical reactions.
(iii) Absorption ? The digested food is absorbed directly into the cytoplasm by diffusion. The digested food spreads out from the food vacuole into the whole cell and after absorption the food vacuole disappears.
(iv) Assimilation ? Food is used to obtain energy through respiration and the remaining part of the food is used for growth.
(v) Egestion ? The undigested food collects inside the cell and the cell membrane ruptures. Through this, the undigested food is thrown out of the body.

(b) The mode of nutrition in amoeba is holozoic.
(c) The process of obtaining food is called phagocytosis, which means cell feeding.

Question 68:
(a) Draw a labelled diagram of the human digestive system. With the help of this diagram, describe the process of digestion of food in man (humans).
(b) Describe one way in which the small intestine is adapted for the absorption of digested food.
(c) What is the special name of the contraction and expansion movement which pushes the food further in our digestive tract (or alimentary canal) ?
Solution :
(a) Digestion of food in human beings: Digestion of food begins in the mouth. The mouth cavity contains teeth, tongue and salivary glands. The teeth cut the food into small pieces, chew and grind it. This is called physical digestion. Salivary glands produce saliva which mixes with the food. This involves chemical digestion of food. The saliva contains an enzyme called salivary amylase which digests the starch and converts it into maltose sugar. Mouth opens into a small funnel shaped area called pharynx which leads to a long tube called oesophagus. It carries the food down into the stomach. The wall of oesophagus is muscular. When the slightly digested food enters the food pipe, the walls of the oesophagus starts contraction and expansion movements called peristaltic movements which push the food into the stomach. Digestion does not take place in the oesophagus. The glands present on the walls of the stomach secrete gastric juice that contains hydrochloric acid, the enzyme pepsin and mucus. A small amount of gastric lipase is also present that breaks down the fats present in the food. Gastric juice is acidic due to the presence of HCl which is necessary for the pepsin to become active and converts the proteins into peptones. The mucus protects the stomach walls from HCl. From the stomach, the partially digested food goes into the small intestine through sphincter muscle. Small intestine is divided into two parts: Duodenum and Ileum. Duodenum receives the secretions of two glands, liver and pancreas through a common duct. Liver secretes bile which is alkaline and contains salts to emulsify the fats (or lipids). The bile secreted by the liver is stored in the gall bladder. Pancreas secretes pancreatic juice which contains trypsin, lipase and pancreatic amylase. Trypsin digests the proteins, lipase emulsifies the fats and pancreatic amylase breaks down the starch. Thus, small intestine is the site of complete digestion of carbohydrates, proteins and fats. The walls of ileum secrete succus entericus which completes the digestion process. 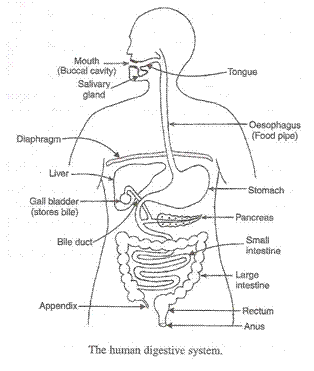 (b) The walls of small intestine has finger like projections like villi which increases the surface area for absorption.
(c) Peristaltic movements.

Question 69:
(a) Describe the parts of our tooth with the help of a labelled diagram.
(b) What is meant by dental caries ? How are they caused ?
(c) What is dental plaque ? What harm can it do ? How can the formation of plaque be prevented ?
Solution :
(a) The tooth has hard outer covering called enamel. The part of tooth below enamel is called dentine inside which is the pulp cavity. The pulp cavity contains nerves and blood vessels. 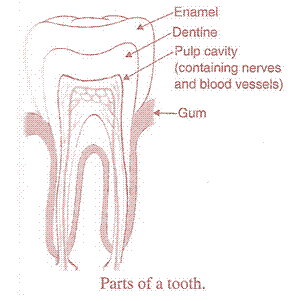 Question 70:
(a) Name the main organs of the human digestive system. Also name the associated glands.
(b) How do carbohydrates, fats and proteins get digested in human beings ?
Solution :
(a) The various organs of the human digestive system are mouth, oesophagus, stomach, small intestine and large intestine. The glands associated with the human digestive system are salivary glands, liver and pancreas.
(b) (i) Carbohydrates – The digestion of carbohydrates begins in the mouth. The human saliva contains an enzyme called salivary amylase which digests the starch present in the food into maltose sugar. The slightly digested carbohydrates when reaches the small intestine, pancreatic amylase present in the pancreatic juice breaks down the starch. The intestinal juice of the small intestine completes the digestion of carbohydrates and finally coverts it into glucose.
(ii) Fats – The process of digestion of fats begins in the stomach. The glands of stomach secrete a small amount of gastric lipase that breaks down the fats present in the food. From the stomach the partially digested food goes into small intestine where the pancreatic lipase breaks down the emulsified fats. The walls of small intestine secrete intestinal juice which converts the fats into fatty acids and glycerol.
(iii) Proteins – The digestion of proteins begins in the stomach. The glands of the stomach secrete gastric juice which contains an enzyme called pepsin. Pepsin converts the proteins into peptones. Pancreatic juice contains trypsin which digests the proteins into peptides and the intestinal juice completes the process of digestion of proteins thus converting it into amino acids.