The document Solutions of Magnetic Effects of Electric Current (Page No-102) - Physics By Lakhmir Singh, Class 10 Class 10 Notes | EduRev is a part of Class 10 category.
All you need of Class 10 at this link: Class 10

Question 3: Name the phenomenon which is made use of in an electric generator.

Question 4: Name the rule which gives the direction of induced current.

Question 5: What condition is necessary for the production of current by electromagnetic induction ?

Solution : The condition necessary for the production of current by electromagnetic induction is that there must be a relative motion between the wire and the magnet.

Question 6: What type of generator is used at Power Stations ?

Solution : If we replace the slip rings of an AC generator by a commutator, then it will become a DC generator.

Question 9: What is the function of brushes in an electric generator ?

Solution : Function of brushes is to transfer the current from coil to load.

Question 10: When a wire is moved up and down in a magnetic field, a current is induced in the wire. What is this phenomenon known as ?

Solution : This phenomena is known as electromagnetic induction.

Question 11: When current is ‘switched on’ and ‘switched off’ in a coil, a current is induced in another coil kept near it. What is this phenomenon known as ?

Question 12: What is the major difference between the simple alternator and most practical alternators ?

Question 13: Why are Thermal Power Stations usually located near a river ?

Question 16: Two circular coils A and B are placed close to each other. If the current in coil A is changed, will some current be induced in the coil B ? Give reason for your answer.

Solution : Yes, some current will be induced in the coil B because of change in magnetic field through the coil B due to change in current in coil A. This is called electromagnetic induction.

Question 17: (a) Explain the principle of an electric generator.
(b) State two ways in which the current induced in the coil of a generator could be increased.

Solution : (a) Electric generator is based on the principle that when a straight conductor is moved in a magnetic field, then current is induced in the conductor.
(b) Two ways in which the current induced in the coil of a generator could be increased are:
(i) by roating the coil faster.
(ii) by using a coil with a larger area.

Question 18: (a) What is the difference between alternating current and direct current ?
(b) What type of current is given by (i) a dry cell, and (ii) a Power House generator ?

Solution : (a) The difference between AC and DC is that DC flows in one direction only while AC reverses direction after equal intervals of time.
(i) DC current remains same with time in its value and direction.
(ii) AC current changes with time and changes its direction every time after a certain interval of time.
(b)
(i) DC
(ii) AC 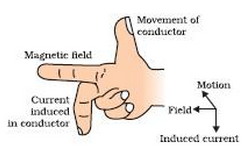 Question 20: Name and state the rule to find the direction of :
current induced in a coil due to its rotation in a magnetic field.
force experienced by a current-carrying straight conductor placed in a magnetic field which is perpendicular to it. Question 21: (a) In what respect does the construction of an A.C. generator differ from that of a D.C. generator ?
(b) What normally drives the alternators in a Thermal Power Station ? What fuels can be used to heat water in the boiler ? Construction: A simple AC generator consists of a rectangular coil ABCD which can be rotated rapidly between the poles N and Sofa  strong horseshoe-type permanent magnet M. The coil is made of a large number of turns of insulated copper wire. The two ends A and D of the coil are connected to two circular pieces of copper metal called slip rings R1 and R2. As the slip rings rotate with the coil, the two fixed pieces of carbon called brushes, B1 and B2. keep contact with them. So. the current produced in the rotating coil can be tapped out through slip rings into the carbon brushes. The outer ends of carbon brushes are connected to a galvanometer to show the flow of current in the external circuit. Working:

Solution : (a) The production of electricity from magnetism is known as electromagnetic induction.
Let us move a wire AB upward rapidly between the poles of the horseshoe magnet. When the wire is moved up, there is a deflection in the galvanometer pointer which shows a current is produced in the wire AB momentarily. Thus, as the wire is moved up through the magnetic field, an electric current is produced in it. (b) Electric generator.
(c) Different ways to induce current in a coil of wire are:
(i) by moving the coil relative to a fixed magnet
(ii) by keeping the coil fixed and moving a magnet relative to it.

Solution : (a) If the current flows in one direction only, it is known as direct current; and if the current reverses direction after equal intervals of time, it is called alternating current.
(b) Source of DC are dry cell, car battery, DC generator etc.
Source of AC are AC generator, bicycle dynamos etc.
(c) An important advantage of AC over DC is that AC can be transmitted over long distances without much loss of electrical energy.
(d) 50Hz.