Question 18: State Fleming’s left-hand rule. Explain it with the help of labelled diagrams. 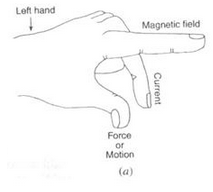 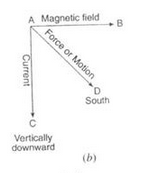 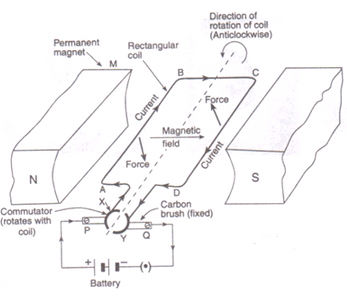 Question 20: (a) In a d.c. motor, why must the current to the coil be reversed twice during each rotation ?
(b) What device reverses the current ?

Solution : (a) The current to the coil must be reversed twice during each rotation so that the coil keeps rotating continuously in the same direction.
(b) Commutator.

Question 22: (a) What is an electric motor ? With the help of a labelled diagram, describe the working of a simple electric motor.
(b) What are the special features of commercial electric motors ?

Solution : (a) Electric motor is a device used for converting electrical energy into mechanical energy.
Working of an electric motor: 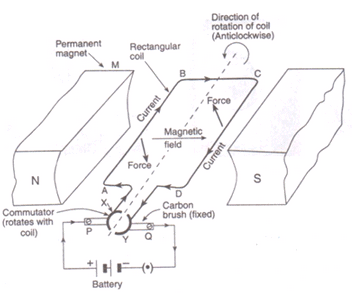 Initially, the coil ABCD is in the horizontal position. On pressing the switch, current enters the coil through carbon brush P and commutator half ring X. The current flows in the direction ABCD and leaves via ring Y and brush Q. The direction of magnetic field is from N pole to S pole of the magnet. According to Fleming’s left-hand rule, the force on sides AB and CD is in the downward and upward directions respectively. This makes the coil ABCD move in the anticlockwise direction.
When the coil reaches vertical position, then the brushes P and Q will touch the gap between the two commutator rings and current is cut off. But the coil does not stop rotating as it has already gained momentum. When the coil goes beyond the vertical position, the side CD comes on the left side and side AB comes to the right side, and the two commutator rings change contact from one brush to the other. This reverses the direction of current in the coil, which in turn reverses the direction of forces acting on the sides AB and CD of the coil. The side CD is pushed down and side AB is pushed up. Thus, the coil rotates anticlockwise by another half rotation.
The reversing of current in the coil is repeated after every half rotation due to which the coil (and its shaft) continues to rotate as long as current from the battery is passed through it. The rotating shaft of electric motor can drive a large number of machines which are connected to it.
(b) In commercial electric motors:
i. the coil is wound on a soft iron core. This increases the strength of magnetic field, which makes the motor more powerful.
ii. the coil contains a large number of turns of insulated copper wire.
iii. a powerful electromagnet is used in place of permanent magnet.