Question 16: Compare the sun and the fossil fuels as the sources of energy.

Question 17: What kind of mirror, concave, convex or plane, would be best suited for use in a solar cooker ? Why ?

Solution : (a) Glass sheet cover
(b) A plane mirror reflector is used in a box type solar cooker so as to get a strong beam of sunlight after reflection from the mirror.

Question 19: What are the advantages and disadvantages of using a solar cooker ?

Question 20: (a) What is a solar cell ? Draw the labelled diagram of a solar cell.
(b) Name the semi-conductor material which is usually used for making solar cells.
(c) Write the uses of solar cells.

Solution : (a) Solar cell is a device which converts solar energy directly into electrical energy. 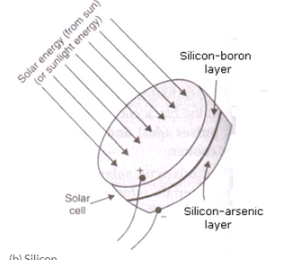 Question 21: State the advantages and disadvantages of using solar cells.

Solution : (a) Advantage of solar cell
(i) They have no moving parts and require no maintenance.
(ii) They can be set up in remote and inaccessible areas
(b) Disadvantage of solar cell
(i) They are very expensive.
(ii) They are less efficient. They can convert only about 25 % of light falling on them into electricity.
(iii) They cannot work during night time.

Question 22: What is a solar cell panel ? For what purpose is it used ? State its two main advantages.

Question 24: How has the traditional use of energy of flowing water been modified for our convenience ?

Question 25: How has the traditional use of wind energy been modified for our convenience ?

Solution : Traditionally, wind energy was used through windmills to pump water from a well and to grind wheat into flour. But the traditional use has been modified and now it is used for the generation of electricity.

Solution : (a) The electricity generated from hydro power plant is known as hydro electricity.
Water is collected in a reservoir at a height, so the water has potential energy stored in it. When the water flows down through this large height, its potential energy gets converted into kinetic energy. The fast flowing water rotates the turbine which is connected to generator through its shaft. The generator produces electricity.

Solution : (a) Construction and working of solar cooker
A solar cooker consists of an insulated metal box or wooden box which is painted all black from inside. There is a thick glass sheet cover over the box and a plane mirror reflector is also attached to the box.
The food to be cooked is put in metal containers which are painted black from outside. These metal containers are then placed inside the solar cooker box covered with the glass
sheet. The sun’s rays fall on the reflector, get reflected into the box through the upper glass and get trapped within it. 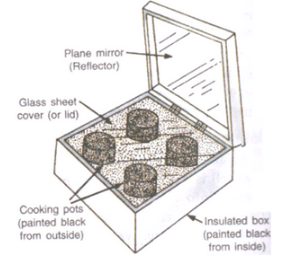 (b) Solar cooker inner body is painted black because black color is a good absorber of heat, so it traps the maximum rays from the sun.
(c) Solar cooker is covered with a glass sheet so as to trap the heat rays in the interior of the box of the cooker.

Solution : (a) Moving air is known as wind. Wind posses kinetic energy.
(b) The fast moving wind strikes the wind turbine which starts rotating. The shaft of the wind turbine also rotates and drives the generator which produces electricity. 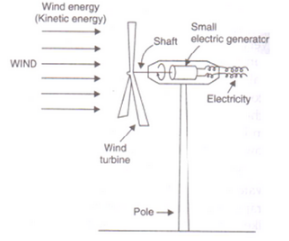