We continue with our discussion of solutions of Laplace’s equation in spherical coordinates by giving some more examples.

Clearly, we have azimuthal symmetry because of the sphere but the direction of the electric field will bring in polar angle dependence. As a result, the potential at large distances has the following form :

where C is a constant. The conductor being a equipotential, the field lines strike its surface normally.

The lines of force near the sphere look as follows : At large distances from the conductor, the above expression must match with

We will now use the boundary condition on the surface of the conductor, which is a constant, say  φ0  This implies

Comparing both sides, we have,

The potential outside the sphere is thus given by,

The electric field is given by the negative gradient of the potential,

The charge density on the sphere is given by the normal component (i.e. radial component) of the electric field on the surface (r=R) and is given by

The charge induced on the upper hemisphere is (recall that θ is measured from the north pole of the sphere as z direction points that way,

The charge on the lower hemisphere is

so that the total charge is zero, as expected.

Thus the sphere behaves like a dipole of dipole moment

If the sphere had a charge Q, it would modify the potential by an additional Coulomb term.

Consider two conducting hemispherical shells which are joined at the equator with negligible separation between them. The upper hemisphere is mained at a potential of

while the lower is maintained at

.We are required to find the potential within the sphere. Since the system gas azimuthal symmetry, we can expand the potential in terms of Legendre polynomials,

Using the argument we have given earlier, the relevant equation for the potential inside and outside the sphere are as follows :

Using this we have,

Since the potential is constant in two hemispheres, we split this integral from

Take m=1 for which

the integrals within the square bracket adds up to φ0, so that we get

Take m=3 for which

The integrals add up to

so that we get

In cylindrical coordinates , Laplace’s equation has the following form :

As before, we will attempt a separation of variables, by writing, 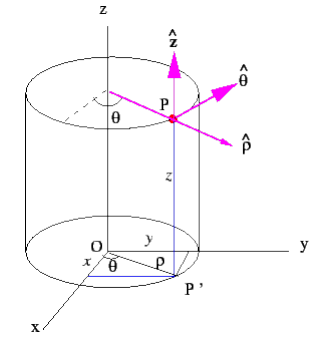 where, as before, we have used the fact that the first two terms depend on p and θ while the third term depends on z alone. Here -k2 is a constant and we have not yet specified its nature. We can easily solve the z equation,

which has the solution,

(Remember that we have not specified k, if it turns out to be imaginary, our solution would be sine and cosine functions. In the following discussion we choose the hyperbolic form.)

Let us now look at the equation for R and Q, Expanding the first term,

Multiplying throughout by p2, we rewrite this equation as

where v2 is an yet unspecified constant. The angle equation can be easily solved,

The domain of θ is [0:2π]. Since the potential must be single valued,

which requires ν must be an integer.

The above can be written in a compact form by defining

The Bessel functions of order ν is given by the power series,

Some of the limiting values of the function are as follows:For

the function oscillates and has the form

When ν is an integer,

are not independent and are related by

The variation of the Bessel function of some of the integral orders are given in the following figure. 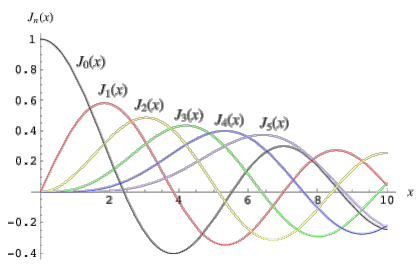 Higher roots are approximately located at

Another usefulness of Bessel function lies in the fact that a piecewise continuous function f defined in [0,a] with f(a)=0 can be expanded as follows :

Using orthogonality property of Bessel functions, we get,

The second kind of Bessel function, viz., the Neumann function, diverges at the origin and oscillates for larger values of its argument ,

Like the Bessel function of the first kind, the Neumann functions are also not independent for integral values of n

variation of the Neumann function are as shown below. 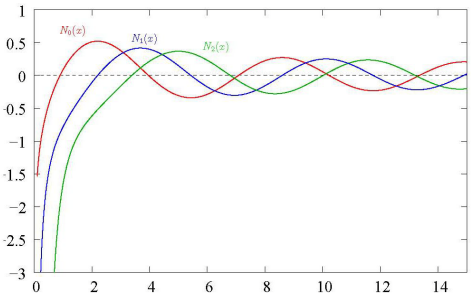 The solution of the radial equation can be written as

(If in the solution of z equation we had chosen k to be imaginary, the argument of the Bessel functions would be imaginary)The complete solution is obtained by summing over all values of k and ν.

A separation of variables of the form

gives us, on expanding the first term,

The solution for Q(θ), is given by

where, as before, singlevaluedness of the potential requires that n is an integer. The radial equation,

Example : An uncharged cylinder in a uniform electric field.

Like the problem of sphere in an electric field, we will discuss how potential function for a uniform electric field is modified in the presence of a cylinder. Let us take the electric field directed along the x-axis and we further assume that the potential does not have any z dependence.

As before, at large distances, the potential is that corresponding to a constant electric field in the x direction, i.e

The charges induced on the conductor surface produce their own potential which superpose with this potential to satisfy the boundary condition on the surface of the conductor. Since there is no z dependence, the general solution of the Laplace’s equation, as explained above is,

Here we have not taken n=0 term because its behavior is logarithmic which diverges at infinite distances. At large distances, the asymptotic behavior of this should match with the potential corresponding to the uniform field. Thus we choose the term proportional to

We need to determine the constant D1.  If the potential on the surface of the cylinder is taken to be zero, we must have for all angles θ,

Substituting these, we get,

The electric field is given by the gradient of the potential, and is 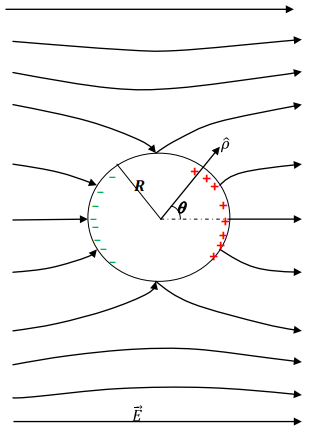 Like in the case of the sphere, you can check that the total charge density is zero.

1. A cylindrical shell of radius R and length L has its top cap maintained at a constant potential φ0, its bottom cap and the curved surface are grounded. Obtain an expression for the potential within the cylinder.

has no sources of charge on it. The potential on the rim

is given by  2 sin 4θ, where θ is the polar angle. Obtain an expression for potential inside the disk.

3. Consider two hemispherical shells of radius R where the bottom half is kept at zero potential and the top half is maintained at a constant potential φ0, Obtain an expression for the potential inside the shell.

1. Take the bottom cap in the x-y plane with its centre at the origin and the z axis along the axis of the cylinder. Since the potential at z=0 is zero, we take

is within the cylinder, Neumann functions are excluded from the solution and we have,

Since the potential on the curved surface is zero irrespective of the azimuthal angle, we must v = 0. This gives,

This determines the values of  kn being given by the zeros of Bessel function of order zero. Finally, the boundary condition on the top cap,

The coefficients An are determined by the orthogonal property of Bessel functions,

using which we have, substituting

Multiply both sides of eqn. (I) with

2. Laplace’s equation in polar coordinates is

which have the solution

Here we have used the singlevaluedness of the potential to conclude that λ is an integer. The solution of the radial equation is

The constant D must be zero because the function must be well behaved at the origin. Likewise the solution of the radial equation for n=0 is a logarithmic function the coefficient of which also vanishes for the same reason. Thus the solution is of the form,

We can determine the coefficients by the boundary condition given at r=1,

all coefficients other than B4  are also zero and B4 = 2.

3. See example 4 of lecture notes. Inside the sphere the potential is given by

Using the orthogonality property of the Legendre polynomial,

Using the fact that only one half of the sphere is maintained at constant potential while the other half is at zero potential, we have,

The integral can be looked up from standard tables,

Using standard table for Legendre polynomials we have,

etc. while all odd orders are zero. Thus,

1. A conducting sphere of radius R is kept in an electrostatic field given by

has no sources of charge on it. The electric field on the rim

is the polar angle. Obtain an expression for potential inside the disk.

3. (Hard Problem) A cylindrical conductor of infinite length has its curved surfaces divided into two equal halves, the part with polar angle

has a constant potential φ1 while the remaining half is at a potential φ2.Obtain an expression for the potential inside the cylinder. Verify your result by calculating the potential on the surface at

1. The potential corresponding to the electric field is

Using the table for Spherical harmonics, the potential can be expressed as

The general expression for solution of Laplace’s equation is

The boundary conditions to be satisfied are

the potential is constant, which we take to be zero. This implies

for all m. This makes the potential expression to be

in this limit,, the second term for the expression for potential goes to zero and we are left with,

Comparing, we get only non-zero value of to be 2 and the corresponding m values as +2. Thus, the potential has the form

The surface charge density is given by

2. The solution of Laplace’s equation on a unit disk is given by (see tutorial problem)

This gives all coefficients other than B4 to be zero and

The coefficient A0, however remains undetermined.

3. Because of symmetry along the z axis, the potential can only depend on the polar coordinates (p, θ) . By using a separation of variables, we can show, as shown in the lecture, the angular part Q(θ) =

The radial equation has the solution

we have ignored n=0 solution because it gives rise to logarithm in radial coordinate which diverges at origin. Thus the general solution for the potential is

where K is a constant. Further, the constant D must be zero otherwise the potential would diverge at p = 0. Let us now apply the boundary conditions, For p = R,

Integrate the first expression from

and the second expression from

and add. The integration over the second term on the right hand side of the two expressions is equal to an integration from 0 to 2π and the integral vanishes. We are left with

To evaluate the coefficients An, multiply both sides by cos mθ and integrate from 0 to 2π,

Similarly, the first term on the right also gives zero.

These integrals can be done by elementary methods,

To determine the coefficients Bn, multiply both sides of (I) by sin mθ and integrate from 0 to 2π,

The first term on the right gives zero.We are left with

The integral can be easily done If m ≠ n,

We have the final expression for the potential,

To verify that this is consistent with the given boundary conditions, let us evaluate the potential at

The infinite series has a value

Similarly, one can check that