Formal Solution in One Dimension

The solution of Laplace’s equation in one dimension gives a linear potential,

where m and c are constants. The solution is featureless because it is a monotonically increasing or a decreasing function of x. Further, since the potential at x is the average of the potentials at x+a and x-a, it has no minimum or maximum.

In two dimensions , the Laplace’s equation is

Since the derivatives are partial, we must have

where a is a constant. Thus the solution to the equation is

Before looking at this solution let us look at a closely resembling Poisson’s equation in 2 dimensions, On the other hand, if you look at the solution (1) of the Laplace’s equation, the graph of the potential as a function of x and y looks like the following : Note that the function does not have a minimum or a maximum. The point x=0, y=0 is a “saddle point” where the function rises in one direction and decreases in another direction, much like a saddle on a horse where the seat slopes downwards along the back but rises along its length both forward and backward.

[Mathematically, in two dimensions, if a function f partial derivatives

are both negative or both positive respectively. For eqn. (1) at the point (0,0)the expression is

This is true in any dimension because for a minimum the second partial derivative with respect to each variable must be negative so that their sum cannot add to zero as is required by Laplace’s equation.

In the remaining part of this lecture we will discuss the solutions of Laplace’s equation in three dimensions in different coordinate systems.

The Laplace’s equation is Cartesian coordinates is given by

of position on the plate. 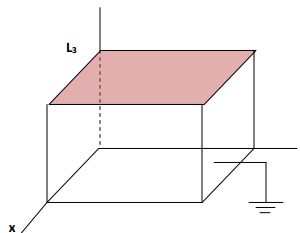 Summarizing the boundary conditions, we have,

We will use a technique known as separation of variables to solve the equation. We assume that the solution

can be written as a product of three independent functions, X, Y and Z, the first one depending on the variable x alone, the second on variable y alone and the third on the variable z alone. It is not that such a trick will always work, but in cases where it does, the uniqueness theorem would guarantee us that that would be the only solution. Keeping this in view, let us attempt such a solution:

Substituting this in eqn. (3) and dividing both sides by the product

In this equation there are three terms, the first depending on x alone, the second on y alone and the third on z alone. Since x,y,z are arbitrary, the equation can be satisfied only if each of the terms is a constant and the three constants are such that they add up to zero.

are constants, which satisfy

The boundary conditions on five faces of the parallelepiped where

can be written as

However, on the sixth face we must have

because the potential on this face depends only on x,y whereas Z can only depend on z.

The solution of this equation is well known to be linear combination of sine and cosine functions. Keeping the boundary conditions

in mind, we can write the solution to be given by

where m is an integer not equal to zero (as it would make the function identically vanish) and A is a constant .

With B being a constant and

Once again n is a non-zero integer.

Then has solutions which are hyperbolic functions,

Thus, we can write the expression for the potential as

The constants Cmn can be derived from above equation because f(x,y) is a known function. For this we use the orthogonal property of the trigonometric functions,

The integral above is then product of two integrals,

In the next lecture we will obtain solutions of Laplace’s equation in spherical coordinates.

1. Find an expression for the potential in the region between two infinite parallel planes z = 0 and z = 1 the potential on the planes being given by the following :

2. Obtain a solution to Laplace’s equation in two dimensions in Cartesian coordinates assuming that the principle of variable separation holds.

3. Find the solution of two dimensional Laplace’s equation inside a rectangular region bounded by

on the fourth side.

1. We know that the general solution is a product of linear combination of either sine, cosine or hyperbolic sine and hyperbolic cosine functions with a relationship between the arguments. . In this case, since on both plates the dependence on x and y is given as

the general solution is

we get, on substituting and dividing throughout by XY,

The solution is then a product of

cosh ky. We can reduce the number of constants from 5 to 4 by redefining the constants. For instance, if

we define the constants as

The constants A, B, C and k are to be determined from boundary conditions.

3. We have seen that the general solution is a product of linear combination of sine and cosine in one of the variables and hyperbolic sine and cosine in the other variable. Since the potential is to be zero for x = a for all values of y, this is possible only if we choose the solution for the variable x to be the trigonometric function and for y to be hyperbolic function. This is because a sine function can become zero at values of its argument other than zero, a hyperbolic function cannot. Further, only sine and sinh functions need to be considered so that at x= 0 and at y=0, the function vanishes. Thus we write

In this form, each term of the series automatically satisfies the boundary conditions at x= 0 and at y=0. Since the potential is to become zero for all values of y for x= 1, this is possible if

We have to satisfy the only remaining boundary condition, viz., for

To determine the coefficients An, we multiply both sides of the expression by

and integrate over x from 0 to a

The integral on the left gives

while that on the right gives

This completely determines the potential.

satisfy Laplace’s equation? 2. Find an expression for the potential in the region between two infinite

2. Find an expression for the potential in the region between two infinite parallel planes z = 0 and z π/2 on which the potentials are respectively given by

3. Find an expression for the potential in the region between two infinite parallel planes, the potential on which are given by the following :

Solution to self assessment Quiz

2. In this case also we have solutions which are written as products of separate variables. The solution can be written as (since X and Y are hyperbolic functions, the function Z is a linear combination of sine and cosine),

The constants A and B can be determined by the boundary conditions. For

3. The z dependence of the potential is a linear combination of hyperbolic sine and cosine function with argument

Thus the general expression is

For z=0, the potential being zero, the cosh term vanishes,