The document Notes | EduRev is a part of the JEE Course NEET Revision Notes.
All you need of JEE at this link: JEE

Question 1: An aromatic compound (A) C8H9­Br reacts with CH2(COOC2H5)2 in the presence of C2H5ONa to give B. Compound B on refluxing with dilute H2SO4 gives (C) which on vigorous oxidation gives (D). The compound (D) is a dibasic acid but on heating does not give an anhydride. It forms a mononitro derivative (E) in which all the substitutents are equidistant from one another. Give structures of (A) to (E) with proper reasoning.Solution:Compound A is

The reactions involved are: The compound (E), a mononitro derivative in which each group is at same distance in benzene nucleus means that it is symmetrical tri substituted (1,3,5) product and thus, two groups in (A), (B), (C) and (D) are at meta positions.

Question 2: A compound A reduces Fehling’s solution and gives positive silver mirror test. On warming with dilute alkali, followed by dehydration it gives a product B which also responds to both the above tests. In addition, it decolourises the colour of bromine water. On treatment with hydrogen in the presence of nickel under pressure the compound B is converted to C which does not give any one of the above three test. Molar mass of the compound C is 74g mol–1. Deduce the structures of A and B giving the chemical equations involved.Solution: The compound A must be an aldehyde as it reduces Fehling’s solution and gives positive silver mirror test. The compound A also contains a-hydrogen atom as it undergoes aldol condensation, the dehydration of which gives B. The latter contains unsaturation as bromine water is decolourised. Let the structure of A be RCH2CHO. The reactions involved are 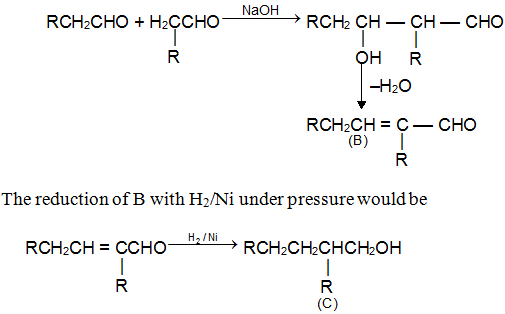 Question 3: An organic compound A on treatment with ethyl alcohol gives a carboxylic acid B and compound C. Hydrolysis of C under acidic conditions gives B and D. Oxidation of D with KMnO4 also gives B. The compound B on heating with Ca(OH)2 gives E (molecular formula C3H6O). E does not give Tollen’s test and does not reduce Fehling’s solution but forms a 2, 4-dinitrophenylhydrazone. Identify A, B, C, D and E.Solution: The given reactions are as follows. 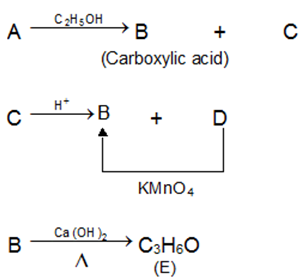