This example shows how polar coordinates can be used to analyze motion.

The rod shown in the picture rotates at constant angular speed in the horizontal plane.  The interface between block and rod has friction coefficient μ .  The rod pushes a block of mass m, which starts at r=0 with radial speed V.   Find an expression for r(t). 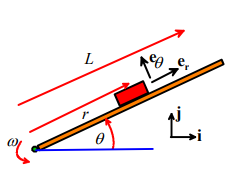 1. Introduce variables to describe the motion – the polar coordinates r,θ work for this problem

2. Write down the position vector and differentiate to find acceleration – we don’t need to do this – we can just write down the standard result for polar coordinates

3. Draw a free body diagram – shown in the figure – note that it is important to draw the friction force in the correct direction. The block will slide radially outwards, and friction opposes the slip.

F=ma gives two equations for N and T.   A third one comes from the friction law T = μN

7. Solve the equation: If you’ve taken AM33 you will know how to solve this equation… But if not, or you are lazy, you can use MAPLE to solve it for you

This can be simplified slightly by hand

A pendulum is a ubiquitous engineering system. You are, of course, familiar with how a pendulum can be used to measure time. But it’s used for a variety of other scientific applications. For example, Professor Crisco’s lab uses pendulum to measure properties of human joints, see Crisco Joseph J; Fujita Lindsey; Spenciner David B, ‘The dynamic flexion/extension properties of the lumbar spine in vitro using a novel pendulum system.’ Journal of biomechanics 2007;40(12):2767-73

In this example, we will work through the basic problem of deriving and solving the equations of motion for a pendulum, neglecting air resistance.

1. Introduce variables to describe motion: The angle θ(t) shown in the figure is a convenient variable.

2. Write down the position vector as a function of the variables We introduce a Cartesian coordinate system with origin at O, as shown in the picture.

3. Differentiate the position vector to find the acceleration: The computer makes this painless. 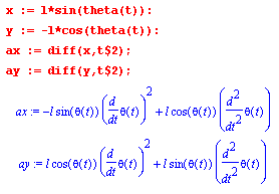 4. The free body diagram is shown in the figure.   The force exerted by the cable on the particle is introduced as an unknown reaction force. The force vector is  F = -R sinθ i + (R cosθ - mg) j

5. Newton’s laws of motion can be expressed as F = ma

6. Eliminate the reaction forces. – In this problem, it is helpful to eliminate the unknown reaction force R. You can do this on the computer if you like, but in this case it is simpler to do this by hand. You can simply multiply the first equation by cosθ and the second equation by sinθ and then add them. This yields

7. Identify initial conditions. Some calculations are necessary to determine the initial conditions in this problem. We are given that θ = 0 at time t=0, and the horizontal velocity is V0 at time t=0, but to solve the equation of motion, we need the value of dθ / dt = 0 . We can find the relationship we need by differentiating the position vector to find the velocity

8. Solve the equations of motion This equation of motion is too difficult for MAPLE but actually the solution does exist and is very well known – this is a classic problem in mathematical physics. With initial conditions θ = 0, dθ / dt = V0 / l   t = 0 the solution is

1. In the first equation, sn(x,k) is a special function called the `sin amplitude.’ You can think of it as a sort of trig function for adults – in fact for k=0, sn(x,0) = sin(x)  and we recover the PG version. You can compute it in Mupad using jacobiSN (x,k)

2. Similarly, am(x,k) is a function called the `Amplitude.’ You can calculate it in Mupad using jacobiAM (x,k). In Mupad, the am function has range -π<am(x,k)<π , so the solution predicts that as the pendulum whirls around the pivot, the angle θ increases from 0 to 2π , then jumps to -2π , increases to 2π again, and so on.

You might have solved the pendulum problem already in an elementary physics course, and might remember a different solution. This is because you probably only derived an approximate solution, by assuming that the angle θ remains small. This occurs when the initial velocity satisfies

which case the solution can be approximated by

In the preceding section, we were able to solve all our equations of motion exactly, and hence to find formulas that describe the motion of the system. This should give you a warm and fuzzy feeling – it appears that with very little work, you can predict everything about the motion of the system. You may even have visions of running a consulting business from your yacht in the Caribbean, with nothing more than your chef, your masseur (or masseuse) and a laptop with a copy of MAPLE.

For nearly all practical problems, the equations of motion need to be solved numerically, by using a computer to calculate values for the position, velocity and acceleration of the system as functions of time. Vast numbers of computer programs have been written for this purpose – some focus on very specialized applications, such as calculating orbits for spacecraft (STK); calculating motion of atoms in a material (LAMMPS); solving fluid flow problems (e.g. fluent, CFDRC); or analyzing deformation in solids (e.g. ABAQUS, ANSYS, NASTRAN, DYNA); others are more general purpose equation solving programs.

In this course we will use MATLAB, which is widely used in all engineering applications. You should complete the MATLAB tutorial before proceeding any further.

In the remainder of this section, we provide a number of examples that illustrate how MATLAB can be used to solve dynamics problems. Each example illustrates one or more important technique for setting up or solving equations of motion.

Example 1: Trajectory of a particle near the earth’s surface (with air resistance)

As a simple example we set up MATLAB to solve the particle trajectory problem discussed in the preceding section. We will extend the calculation to account for the effects of air resistance, however. We will assume that our projectile is spherical, with diameter D, and we will assume that there is no wind. You may find it helpful to review the discussion of aerodynamic drag forces in Section 2.1.7 before proceeding with this example. 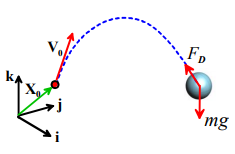 1. Introduce variables to describe the motion: We can simply use the Cartesian coordinates of the particle (x(t), y(t), z(t))

3. Differentiate the position vector with respect to time to find the acceleration. Simple calculus gives

4. Draw a free body diagram. The particle is now subjected to two forces, as shown in the picture. Gravity – as always we have Fg = -mgk.

The magnitude of the air drag force is given by

The total force vector is therefore

5. Write down Newton’s laws of motion.

8. Solve the equations of motion. We can’t use the magic ‘dsolve’ command in MAPLE to solve this equation – it has no known exact solution. So instead, we use MATLAB to generate a numerical solution.

Converting the equations of motion: We can’t solve directly for (x,y,z), because these variables get differentiated more than once with respect to time. To fix this, we introduce the time derivatives of (x,y,z) as new unknown variables. In other words, we will solve for  (x, y, z, vx , vy , vz) , where

So, expressed as a vector valued differential equation, our equations of motion are

MATLAB script. The procedure for solving these equations is discussed in the MATLAB tutorial. A basic MATLAB script is listed below.

This produces a plot that looks like this (the plot’s been edited to add the grid,etc) 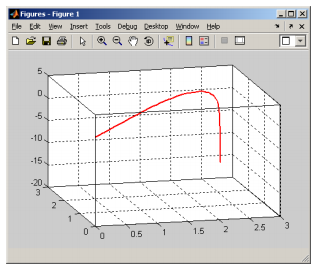