You may have lost interest in pendulum problems by now. Bear with us, however- it is a convenient example that illustrates how to solve problems with constraints.

So we re-visit the problem shown in the figure. This time, we will describe the system using (x,y) coordinates of the mass instead of the inclination of the cable.

1. Introduce variables to describe the motion: We will use the position of the mouse relative to point O (x,y) as the variables.

2. Write down the position vector in terms of these variables:

4. Draw a free body diagram. We can use the FBD we drew earlier. The force must now be expressed in terms of x and y instead of θ , however. Simple trig shows that

The resultant force is therefore

This is two equations of motion – we can rearrange them as

6. Eliminate reactions –We could eliminate R if we wanted – but this time we won’t bother. Instead, we will carry R along as an additional unknown, and use MATLAB to calculate it.

7. If there are more unknown variables than equations of motion, look for constraint equations. We now have three unknowns (x,y,R) but only two equations of motion (eliminating R in step 6 won’t help – in this case we will have two unknowns but only one equation of motion). So we need to look for an additional equation somewhere.

The reason we’re missing an equation is that we took x,y to be arbitrary – but of course the mouse has to remain attached to the cable at all times. This means that his distance from O is fixed –i.e.

This is the missing equation.

We could, if we wanted, use this equation to eliminate one of our unknown variables (doing the algebra by hand). Instead, however, we will use MATLAB to do this for us. For this purpose, we need to turn the equation into a constraint on the accelerations, instead of the position of the particle. To get such an equation, we can differentiate both sides of the constraint with respect to time

This is now a constraint on the velocity. Differentiating again gives

Again – if you have trouble doing the derivatives, just use MAPLE (don’t forget to specify that x, y are functions of time, i.e. enter them as x(t), y(t) when typing the constraint formula into MAPLE).

[Aside – when I first coded this problem I tried to constrain the velocity of the particle, instead of the acceleration. This doesn’t work (as I should have known), and produces some rather interesting MATLAB errors – if you are curious, try it and see what happens. If you are even more curious, you might like to think about why you need to constrain accelerations and not velocities.]

7. Identify initial conditions. We know that, at time t=0

In the usual way, we introduce vx = dx / dt, vy = dy / dt as additional unknowns. Our set of unknown variables is x, y, vx , vy , R. The equations of motion, together with the constraint equation, can be expressed as

This can be expressed as a matrix equation for an unknown vector [dy / dt, R] 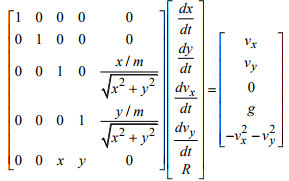 We can now use MATLAB to solve the equations for the unknown time derivatives dy / dt , together with the reaction force R. Here’s a MATLAB script that integrates the equations of motion and plots (x,y) as a function of time. Notice that, because we don’t need to integrate R with respect to time, the function ‘eom’ only needs to return dy / dt .

Final remarks: In general, it is best to avoid using constraint equations – it makes the problem harder to set up, and harder for MATLAB to solve. Sometimes they are unavoidable, however – in some cases you might not see how to identify a suitable set of independent coordinates; and there are some systems (a rolling wheel is the most common example) for which a set of independent coordinates do not exist. These are given the fancy name `non-holonomic systems’ – mentioning that you happen to be an expert on non-holonomic systems during a romantic candle-light dinner is sure to impress your dates.

As a representative application of the methods outlined in the preceding section, we will set up and solve the equations of motion for a very simple idealization of a vehicle. This happens to be an example of a non-holonomic system (sorry we aren’t at a romantic dinner). Don’t worry if the model looks rather scary – this calculation is more advanced than anything you would be expected to do at this stage of your career… Our goal is to illustrate how the method we’ve developed in this section can be applied to a real engineering system of interest. You should be able to follow and understand the procedure.

The figure shows how the vehicle is idealized. Here are a few remarks: 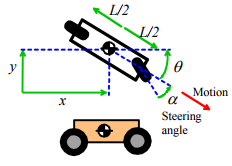 1. We consider only 2D planar motion of the vehicle

2. For simplicity we assume the vehicle has only two wheels, one at the front and one at the rear. (It’s not a motorcycle, however, because we won’t account for the vehicle leaning around corners)3. The car is idealized as a particle with mass m supported on a massless chassis with wheelbase L.4. Aerodynamic drag forces are assumed to act directly on the particle.5. The most complicated and important part of a vehicle dynamics model is the description of how the wheels interact with the road. Here, we will just assume thata. The front and rear of the vehicle have to move in a direction perpendicular to each wheel’s axle. Reaction forces must act on each wheel parallel to the axle in order to enforce this constraint (see the FBD).b. In addition, we assume that the vehicle has rear-wheel drive. This is modeled as a prescribed force P(t) exerted by the ground on the rear wheel, acting parallel to the rolling direction of the wheel (see the FBD).c. The front wheel is assumed to roll freely and have negligible mass – this means that the contact force acting on the wheel must be perpendicular to its rolling direction (see the FBD). The vehicle is steered by rotating the front wheel through an angle α(t) with respect to the chassis.

This is a vastly over-simplified model of wheel/road interaction – for example, it predicts that the car can never skid. If you are interested in extending this calculation to a more realistic model, ask us… We’d be happy to give you better equations!

1. Introduce variables to describe the motion: We will use the (x,y) coordinates of car and its orientation θ as the variables.

2. Write down the position vector in terms of these variables: r = xi + yj 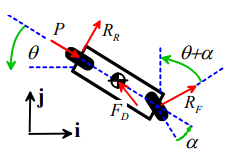 The drag force is related to the vehicle’s velocity by

where c is a drag coefficient. For a more detailed discussion of drag forces see the first example in this section.

The resultant force on the vehicle is

Because we are modeling the motion of the vehicle’s chassis, which can rotate, we must also consider the moments acting on the chassis. You should be able to verify for yourself that the resultant moment of all the forces about the particle is

This gives two equations of motion; the condition M=0 for the chassis gives one more.

6. Eliminate reactions – It’s easier to eliminate them with MATLAB.

1. Note that the position vector of the rear wheel is

2. The velocity follows as

3. Note that n = sinθj + cosθj  is a unit vector parallel to the axle of the rear wheel.

4. For the rear of the vehicle to move perpendicular to the rear axle, we must have v.n = 0 . This shows that

Similarly, for the front wheel, we can show that

We need to re-write these equations as constraints on the acceleration of the vehicle. To do this, we differentiate both constraints with respect to time, to see that

7. Identify initial conditions: We will assume that the vehicle starts at rest, with

as new variables, and then solve for [x, y,θ , vx , vy ,ω] .  We also need to eliminate the unknown reactions. It is not hard to show that the equations of motion, in matrix form, are

Finally, we can type these into MATLAB – here’s a simple script that solves the equations of motion and plots the (x,y) coordinates of the car to show its path, and also plots the speed of the car as a function of time. The example simulates a drunk-driver, who steers with steering angle  α = 0.1+0.2sin(t) , and drives with his or her foot to the floor with P=constant.

function [alpha,dadt,P]=driver(t)% This function behaves like the driver of the car -% at time t it returns the steering angle alpha % dalpha/dt and the driving force P 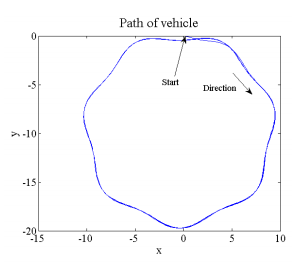