The figure shows satellite with mass m orbiting a planet with mass M. At time t=0 the satellite has position vector r =Ri and velocity vector v = Vj . The planet’s motion may be neglected (this is accurate as long as M>>m). Calculate and plot the orbit of the satellite.

1. Introduce variables to describe the motion: We will use the (x,y) coordinates of the satellite.

2. Write down the position vector in terms of these variables: r = xi + yi

4. Draw a free body diagram. The satellite is subjected to a gravitational force.

The magnitude of the force is

5. Write down Newton’s laws of motion.

8. Solve the equations of motion. We follow the usual procedure: (i) convert the equations into MATLAB form; and (ii) code a MATLAB script to solve them.

Converting the equations of motion:  We introduce the time derivatives of (x,y) as new unknown variables.   In other words, we will solve for (x, y, vx , vy), where

So, expressed as a vector valued differential equation, our equations of motion are

Matlab script: Here’s a simple script to solve these equations.

function satellite_orbit% Function to plot orbit of a satellite% launched from position (R,0) with velocity (0,V)

Do we believe this result? It is a bit surprising – the satellite seems to be spiraling in towards the planet. Most satellites don’t do this – so the result is a bit suspicious. The First Law of Scientific Computing states that ` if a computer simulation predicts a result that surprises you, it is probably wrong.’ 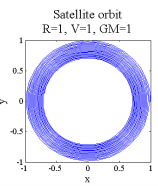 So how can we test our computation? There are two good tests:

1. Look for any features in the simulation that you can predict without computation, and compare your predictions with those of the computer.2. Try to find a special choice of system parameters for which you can derive an exact solution to your problem, and compare your result with the computer We can use both these checks here.

(If you don’t know these formulas, don’t panic – we will discuss energy and angular momentum in the next part of the course)

We can have MATLAB plot E/m and |H| / m , and see if these are really conserved. The energy and momentum can be calculated by adding these lines to the MATLAB script

You can then plot the results (e.g. plot(t_values,energy)). The results are shown below.

These results look really bad – neither energy, nor angular momentum, are conserved in the simulation. Something is clearly very badly wrong.

Comparison to exact solution: It is not always possible to find a convenient exact solution, but in this case, we might guess that some special initial conditions could set the satellite moving on a circular path. A circular path might be simple enough to analyze by hand. So let’s assume that the path is circular, and try to find the necessary initial conditions. If you still remember the circular motion formulas, you could use them to do this. But only morons use formulas – here we will derive the solution from scratch. Note that, for a circular path 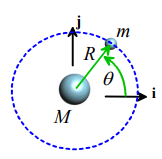 (a) the particle’s radius r=constant. In fact, we know r=R, from the position at time t=0.(b) The satellite must move at constant speed, and the angle θ must increase linearly with time, i.e. θ = ωt where θ = ω is a constant (see section 3.1.3 to review motion at constant speed around a circle).

With this information we can solve the equations of motion. Recall that the position, velocity and acceleration vectors for a particle traveling at constant speed around a circle are

We know that |v| = V from the initial conditions, and |v| is constant. This tells us that

Finally, we can substitute this into Newton’s law

So, if we choose initial values of GM V R , , satisfying this equation, the orbit will be circular. In fact, our original choice, GM = 1,V  = 1, R =1 should have given a circular orbit. It did not. Again, this means our computer generated solution is totally wrong.

Fixing the problem: In general, when computer predictions are suspect, we need to check the following

1. Is there an error in our MATLAB program? This is nearly always the cause of the problem. In this case, however, the program is correct (it’s too simple to get wrong, even for me).

2. There may be something wrong with our equations of motion (because we made a mistake in the derivation). This would not explain the discrepancy between the circular orbit we predict and the simulation, since we used the same equations in both cases. 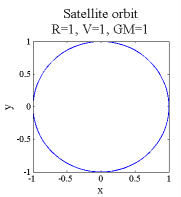 3. Is the MATLAB solution sufficiently accurate? Remember that by default the ODE solver tries to give a solution that has 0.1% error. This may not be good enough. So we can try solving the problem again, but with better accuracy. We can do this by modifying the MATLAB call to the equation solver as follows

4. Is there some feature of the equation of motion that makes them especially difficult to solve? In this case we might have to try a different equation solver, or try a different way to set up the problem.

The figure on the right shows the orbit predicted with the better accuracy. You can see there is no longer any problem – the orbit is perfectly circular. The figures below plot the energy and angular momentum predicted by the computer. 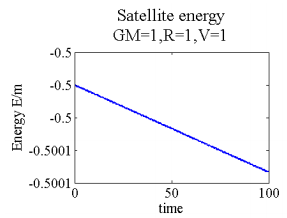 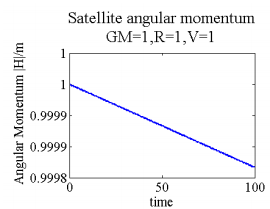 There is a small change in energy and angular momentum but the rate of change has been reduced dramatically. We can make the error smaller still by using improving the tolerances further, if this is needed. But the changes in energy and angular momentum are only of order 0.01% over a large number of orbits: this would be sufficiently accurate for most practical applications.

Most ODE solvers are purposely designed to lose a small amount of energy as the simulation proceeds, because this helps to make them more stable. But in some applications this is unacceptable – for example in a molecular dynamic simulation where we are trying to predict the entropic response of a polymer, or a free vibration problem where we need to run the simulation for an extended period of time. There are special ODE solvers that will conserve energy exactly.

The figure shows a very simple idealization of a 2-storey building. The roof and second floor are idealized as blocks with mass m. They are supported by structural columns, which can be idealized as springs with stiffness k and unstretched length L. At time t=0 the floors are at rest and the columns have lengths l1 = L - mg / k l2 = L - mg / 2k (can you show this?). We will neglect the thickness of the floors themselves, to keep things simple 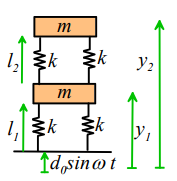 For time t>0, an earthquake makes the ground vibrate vertically. The ground motion can be described using the equation d = d0 sinωt. Horizontal motion may be neglected. Our goal is to calculate the motion of the first and second floor of the building.

It is worth noting a few points about this problem:

1. You may be skeptical that the floor of a building can be idealized as a particle (then again, maybe you couldn’t care less…). If so, you are right – it certainly is not a `small’ object. However, because the floors move vertically without rotation, the rigid body equations of motion simply reduce to F = ma and M=0, where the moments are taken about the center of mass of the block. The floors behave as though they are particles, even though they are very large.

3. This problem could be solved analytically (e.g. using the `dsolve’ feature of MAPLE) – a numerical solution is not necessary. Try this for yourself.

1. Introduce variables to describe the motion: We will use the height of each floor (y1,y2) as the variables.

Note that we must measure the position of each mass from a fixed point.

where FS1, FS2 are the forces in the two springs (note that we assume that all the springs are in tension – this makes the calculation easier).

We will have to find the spring lengths l1, l2 in terms of our coordinates y1,y2 to solve the problem. Geometry shows that

5. Write down Newton’s laws of motion. F=ma for each mass gives

This is two equations of motion – we can substitute for I1,I2  and rearrange them as

7. Identify initial conditions. We know that, at time t=0

as additional unknown variables, in the usual way. Our equations of motion can then be expressed as

We can now code MATLAB to solve these equations directly for dy/dt. A script (which plots the position of each floor as a function of time) is shown below. 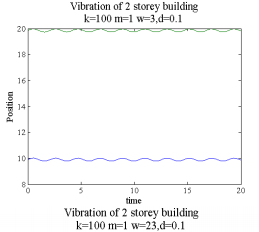 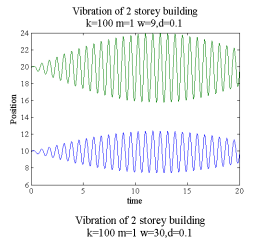 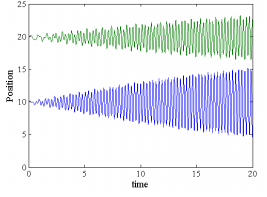 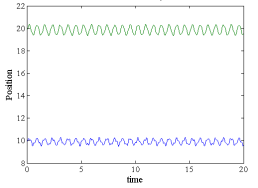 This problem illustrates a shortcoming of solving problems on the computer without thinking too much about them. The way we set up the problem, it looks as though the solution depends on g, and the unstretched spring length L, but in fact this is not the case. Not being aware of this makes the equations of motion much more complicated than they really are, and makes it harder to interpret the results. Of course we could learn by trial and error that the solution is independent of L and g, but a better approach is to eliminate these variables from the equations of motion altogether.

There is a standard way to do this – instead of solving for the lengths of the springs y, we solve for the deflection of the masses from their static equilibrium positions. We will discuss this in more general terms when we discuss vibration problems later in the course. But we’ll work through the process here, because it’s useful to use the same approach in the mass launcher design project. 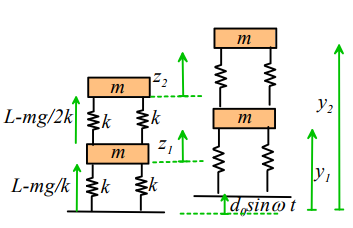 The accelerations of the masses don’t depend on what we use for the origin (provided the origin is fixed, of course), so

The free body diagram doesn’t change either, and the forces in the springs are still given by

But now we have to find the spring lengths  l1,l2 in terms of our coordinates z1,z2  to solve the problem. Geometry shows that

Finally substituting for l1,l2 and simplifying we find that lots of terms magically cancel, and

These equations don’t involve L or g. Furthermore the initial conditions are simply

so the solution for z1,z2 must be independent of L and g.