A space lattice is defined as “an infinite array of points in three dimensional space in which each point is identically located with respect to other”. It is a periodic arrangement of points arranged in regular manner and having repeat distance in three directions which are termed as “fundamental lattice vectors”. If at these lattice positions, we place atom, or group of two, three etc atoms we obtained a crystalline solid.  Let us now consider the case of a two dimensional array of points as shown in figure (i).A two-dimensional array may have (a) square (b) rectangular array.

are fundamental translational vectors, and

is generated vector. If points are located such that

A three dimensional space lattice may have  1. Cubic array when a = b = c2. Non-cubic array  a lattice exhibit perfect translational symmetry and relative to an arbitrary chosen origin at a lattice pint, any other lattice point has the position vector 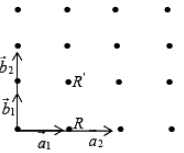 ➤ Unit cellsThe entire lattice structure of a crystal can be generated by identical blocks known as unit cell. The unit cell may be a group of ions, atoms or molecules. The unit cell is the smallest building block or geometric figure from which the crystal is built up by repeating it in three dimensions as shown below. 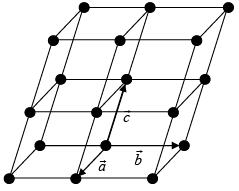 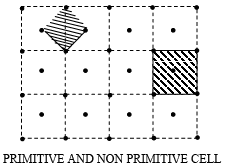 (i) Connect a given lattice point to all the nearby lattice points.(ii) Draw normal at the mid point of lines connecting the lattice points.The smallest volume enclosed by the normal is the required primitive cell, such a cell is Wigner-Seitz cell

The repeating unit assembly: atom, molecule, ion or radical that is located at each lattice point is called basis or motif. Every basis is identical in composition, arrangement and orientation, when the basis is repeated with correct periodically in all directions, it gives the actually crystal structure, the crystal structural is real, while the lattice is imaginary.Thus,  Lattice + Basis = Crystal structure  Figure shows the basis representing each lattice point. It is observed from the figure that a basis consists of three different atoms.

There are number of ways in which an actual crystal may be built up and atoms piled together resulting in a great many crystal structures. But each of the structure consists of some fundamental patterns repeated at each point of a space lattice. The scheme of repetitions of a space lattice are very limited in number while the possible crystal structures are almost unlimited. But it was shown by Bravais that there are 14 different arrays or networks of lattice in which points can be arranged in space so that each point has identical surrounding these are known as Bravais Space Lattice.Bravais Lattice: These are 5 in 2-Dimension and 14 in 3-Dimension 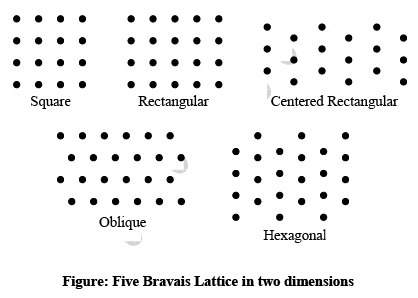 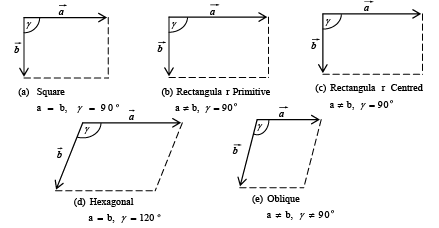 ➤ Bravais Lattices in three-dimension: In three dimension Bravais lattice is given as 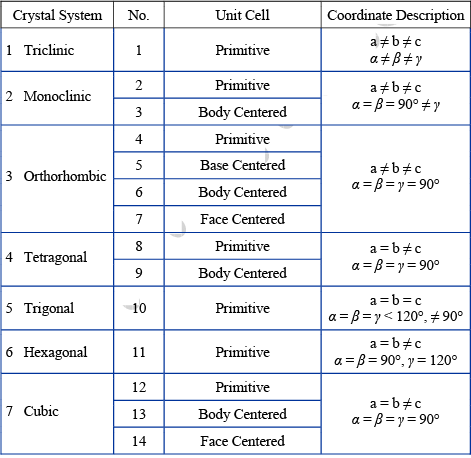 ➤ Line Indices in a Crystal LatticeWhile dealing with a crystal system, it is necessary to refer to the crystal planes, and directions of the straight lines joining the lattice points in a space lattice. A notation system which uses a set of three integers (n1, n2 & n3) is adopted to describe both the positions of planes or directions within the lattice. 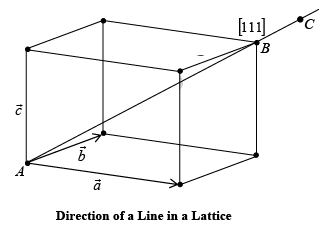 which joins Lattice points A and B can be represented by an Equation. 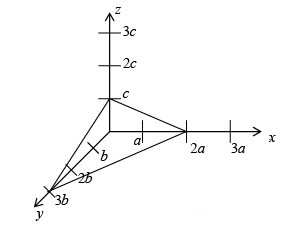 Example 1: Obtain the Miller indices of a plane which intercepts at – a, b/2, 3c in a simple cubic unit cell. 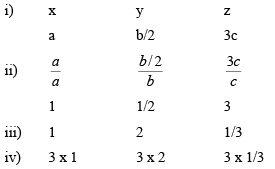 Example 2: The miller indices of a plane in a simple cubic lattice crystal are (123). Get the co-ordinates of the plane 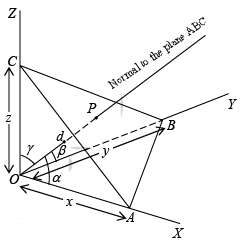 h = a/x therefore, x = a/hk = b/y therefore, y=b/kl = c/z therefore z= c/lWriting the values of x, y and z in the above trigonometric equations we get,

From solid geometry, Cos2 α + cos2 β + Cos2 γ =1Substituting the values of the trigonometric relations we get

Then, the inter-planar distance ‘d’ is given by

Density is a macroscopic property. Basically it is the mass per unit volume. In case of crystals, mass of atoms packed in a conventional unit cell per unit volume of the cell gives the density of the crystal.

From density equation, mass of atoms in the unit cell in terms of the density of the crystal is given bym = ρ V

From this equation, the density of the crystal is