The uniqueness theorem for Poission’s or Laplace’s equations, which we studied in the last couple of lectures, has some interesting consequences. Frequently, it is not easy to obtain an analytic solution to either of these equations. Even when it is possible to do so, it may require rigorous mathematical tools. Occasionally, however, one can guess a solution to a problem, by some intuitive method. When this becomes feasible, the uniqueness theorem tells us that the solution must be the one we are looking for.

One such intuitive method is the “method of images” a terminology borrowed from optics. In this lecture, we illustrate this method by some examples. 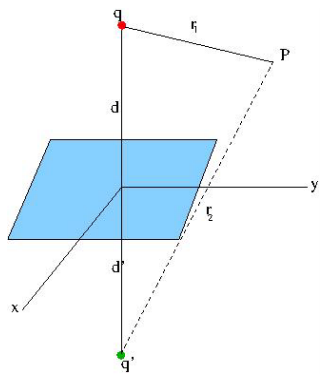 Consider an infinite, grounded conducting plane occupying which occupies the x-y plane. A charge q is located at a distance d from this plane, the location of the charge is taken along the z axis. We are required to obtain an expression for the potential everywhere in the region z > 0 , excepting of course, at the location of the charge itself. Let us look at the potential at the point P which is at a distance r1 from the charge q (indicated by a red circle in the figure).

Instead of solving the problem from the first principles, let us suppose there existed an “image charge” q’ at a distance d’  “below” the plane. This is very similar to the image of an object located in front of a mirror, the image of the object is “behind” the mirror. The image is virtual because we cannot capture the image on a screen behind the mirror. In the same way, the image charge is located at a virtual distance and the charge itself is fictitious. Let the point P be at a distance r2 from the image charge. We take the origin on the plane, as shown. Let the position of P be (x,y,z).

The potential φ1(P) at P due to the real charge q and φ2(P) due to the image charge q’ is given by superposition,

The potential P is given by

Note that this expression for the potential satisfies the Laplace’s equation at a general point P above the conducting plane, since

and at a point P, neither of the distances is zero so that the delta function vanishes. Let us impose the boundary condition of the potential being zero on the boundary, We must have, on the plane,

Since the distances are positive, the chargesq and  q’ must have opposite sign. V Further, we must have, substituting z = 0 for the position of the conducting plane,

It is important to realize that the field exists only in the region above the conducting plane. The expression for potential which satisfies Laplace’s equation everywhere above the plane and also satisfies the boundary condition on the plane, is given by

where we have, because of obvious reasons, switched to a cylindrical coordinates

as the square of the distance of the foot of the perpendicular from the point P onto the plane from the origin.

The electric field is obtained as the negative gradient of the potential, and is given by

We emphasize that this expression is valid only in the region

The total induced charge is obtained by integrating this expression in the entire xy plane,

Thus the total induced charge has the same magnitude as the real charge, though of opposite sign. In the following figure we have plotted the charge density as a function of x-y coordinates on the plane for some representative distances of the object charge. One can see that the magnitude of the charge density is maximum at a point on the plane directly opposite to the real charge and decreases as the distance from this point increases. 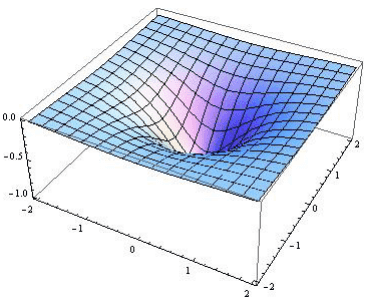 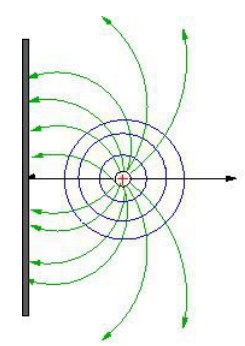 Thus in the above problem we have replaced the original problem of a charge and a conducting plane by the charge and an image charge and eliminated the conducting plane altogether. The solution obtained satisfies the boundary condition that at z=0, the potential is zero. The solution does not make sense in the region z < 0 but that is immaterial because we did not seek the solution in that region in any case! The electric field on the plane z = 0is purely along the vertical plane because, the object and the image charges being equidistant from a point on the conducting plane, the horizontal components cancel by symmetry. The uniqueness theorem guarantees that this is the only possible solution.

Let us calculate the field that is generated at the position of the real charge due to the induced charges. For this we take the general expression for the electric field and consider only the contribution due to the image charge, given by the second term within each curly bracket. As the real charge is located at p = 0, z = d, only the normal component gives non-zero contribution,

which is the same as the force exerted by the image charge on the real charge (located at a distance 2d from each other.

It is interesting to calculate field at the surface due to the charge q. In this case, we do a bit of hand waving and consider only half of the field that we have calculated. This is because the image charge being fictitious does not create a field on the surface of the conductor. The force on the conductor is then given by

The force exerted on the surface is then

which, as expected from Newton’s third law, is equal and opposite to the force exerted on the charge by the surface.

Consider two semi infinite grounded, conducting planes intersecting along the z axis, which is taken out of the plane of the paper (which is the xy plane). A charge q is located at a point (a, b) Calculate the force on the charge q due to the charges induced on the surfaces of the planes. 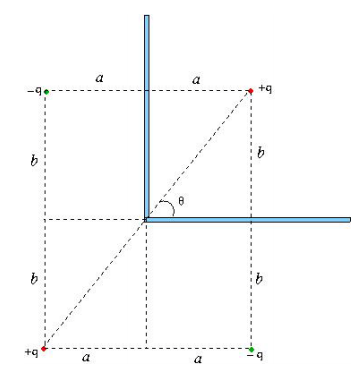 In addition, there is a line charge of density + λ at

The potential due to a line charge parallel to z axis is independent of z coordinate and only depends on the distance p of the point from the line charge, being given by,

where C is a constant and

is the coordinate of the point P where the potential is sought. Similar expressions for the potential due to the image charges can be written down and the total potential obtained by superposition. Thus, the net potential at

It can be seen that the solution satisfies the boundary condition

Note that the tangential components on the y = 0 plane is

In the following figure we have plotted the charge densities for different locations of the given charged line indicated on the graph. Consider the situation where the line charge is at the point (a = 2, b= 1). The axes are the coordinates of points on the plane. 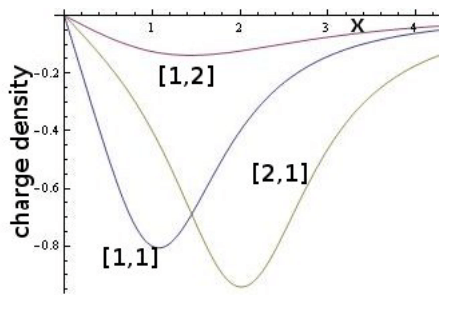 Adding these and using the identity tan

we get the total linear charge density on the two planes to be -λ.

The method of images is not restricted to only planar geometry. We will take up different application in the next lecture. (Part of the video for application of method of images applied to spherical conductors appears in this unit but the text for the entire problem appears along with Lecture 18].

1. A point charge is located at a distance d above a grounded, infinite, conducting plane. Let P be the foot of the perpendicular from the position of the charge on to the plane. Find the radius of a circle centred at P in which one quarter of all the induced charges remain.

2. A point charge q is located at a point P along the bisector of the angle between two semi-infinite grounded conducting planes at a distance d from the intersection of the planes. The angle between the planes is 600. Determine all the image charges. Find the potential at a point S, located at a distance r from the intersection along the line joining P and S.

1. We had shown that the charge density is given by

So, the charge induced in a radius R is 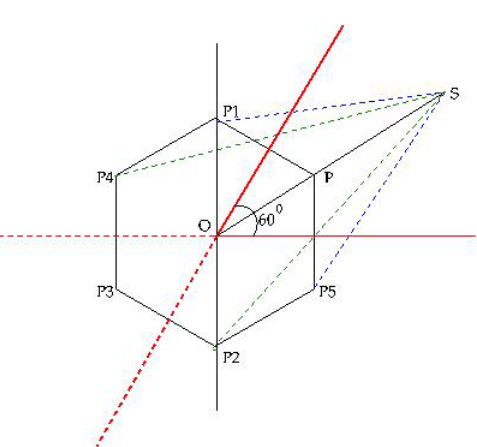 Expand each term in powers of 1/r, keeping terms up to

1. A charge q is located z = d at and a second charge -2q at z = 2d above an infinite grounded conducting plane occupying the xy plane at z = 0. Calculate the force exerted on the charge q.

2. A point charge q is located at a distance d above a grounded, infinite, conducting plane. A second charge -q is free to move along the perpendicular from the position of the charge q on to the plane. Where should this charge –q be placed so that the net force on it is zero?

Solution to Self Assessment Quiz

2. The image charges due to the charges q and -q are shown. Let the charge -q be at a distance x from the plane. 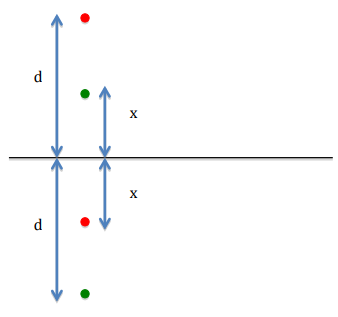 Force on –q in upward direction is to be equated to zero. This gives