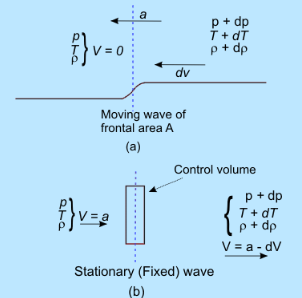 (b) A compression wave leaves behind a fluid moving in the direction of the wave (Fig. 39.1(a)).

(c) Equation (39.1) also signifies that the fluid velocity on the right is much smaller than the wave speed " a ". Within the framework of infinitesimal strength of the wave (sound wave), this " a " itself is very small.

If the wave strength is very small, the pressure change is small.

he larger the strength dp/p  of the wave ,the faster the wave speed; i.e., powerful explosion waves move much faster than sound waves.In the limit of infinitesimally small strength,  dp → 0  we can write

(a) In the limit of infinitesimally strength of sound wave, there are no velocity gradients on either side of the wave. Therefore, the frictional effects (irreversible) are confined to the interior of the wave.

(b) Moreover, the entire process of sound wave propagation is adiabatic because there is no temperature gradient except inside the wave itself.

(c) So, for sound waves, we can see that the process is reversible adiabatic or isentropic.

So the correct expression for the sound speed is

For a perfect gas, by using of

= const and p = pRT, we deduce the speed of sound as

Pressure Field Due to a Moving Source 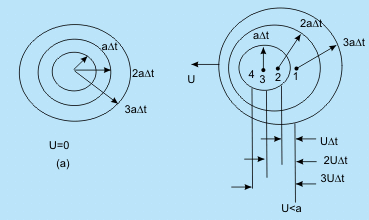 points of time are enveloped by an imaginary conical surface known as "Mach Cone". The half angle of the cone α is known as Mach angle and given by

Since the disturbances are confined to the cone, the area within the cone is known as zone of action and the area outside the cone is zone of silence .

An observer does not feel the effects of the moving source till the Mach Cone covers his position. 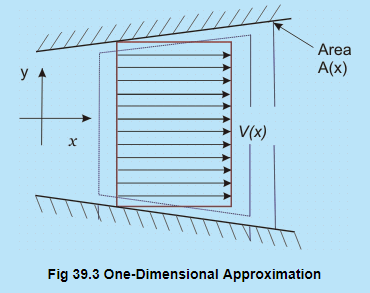 For steady one-dimensional flow, the equation of continuity is

is the kinetic energy per unit mass.

Let us discuss the various terms from above equation:

It is to be noted that dA is directed along the outward normal.

The work done on the control surfaces is

The rate of heat transfer to the control volume is

where Q is the heat added per unit mass (in J/kg).

We know that the density p is given by

This is energy equation, which is valid even in the presence of friction or non-equilibrium conditions between secs 1 and 2.

Integrating along a streamline, we get the Bernoulli's equation for a compressible flow as

Momentum Principle for a Control Volume

For a finite control volume between Sections 1 and 2 (Fig. 39.3), the momentum principle is

where F is the x-component of resultant force exerted on the fluid by the walls. Note that the momentum principle, Eq. (39.13), is applicable even when there are frictional dissipative processes within the control volume